The Peerless Prognosticator is ON THE AIR!!! -- Game 12: Sharks at Capitals, November 8th

The Washington Capitals wrap up their three-game home stand on Tuesday night when the San Jose Sharks come to town.  The Caps will be looking to extend their season-best five-game winning streak and improve their home record to 5-1-0.

The Sharks come to town looking something like a team with a Stanley Cup finals hangover.  San Jose, losers to the Pittsburgh Penguins in last spring’s six-game Cup final, won three of their first four games of the 2016-2017 season, but they are 3-5-0 in their last eight games and bring a three-game losing streak into this contest.

It is the down-roster players who are coming up a bit short in the early going.  For example, Patrick Marleau, the all-time franchise leader in goals scored (by an almost 2-to-1 margin – 484 to 270 – over Pavelski) has three goals in 12 games (a 21-goal pace), and he has just one assist for four points.  It has been a case or either not getting opportunities or not taking advantage of those he has had.  After recording 12 shots on goal in his first three games, he has a total of 18 in his last nine games, halving his shots-per-game rate from 4.0 to 2.0.  Marleau, who had seven 30-plus goal seasons over a nine year span ending with the 2013-2014 season, did drop off in the two subsequent seasons (19 and 25 goals, both in seasons with 82 games played.  He is 9-12-21, plus-4 in 25 career games against the Caps.

Another player having a slow start of sorts is Logan Couture.  Through 12 games he is 2-4-6, minus-5, but his problem is recent production.  Since going 2-3-5, even, in his first five games, he is 0-1-1, minus-5, in his last seven contests.  Couture missed 23 games with a fractured fibula last season and another seven with a lower body injury that limited him to 52 games.  In that sense one might wonder if there are any lingering physical issues, but there is also this.  Since he averaged 0.44 goals per game in the abbreviated 2012-2013 season, his goals per game has dropped in each year since to where he is averaging 0.17 goals per game at the moment.  Couture is 2-5-7, even, in nine career games against Washington.

The defense is something of a lopsided affair when it comes to scoring.  Brent Burns is picking up where he left off last season, standing at 4-7-11, minus-2, after 12 games.  The other five defensemen to dress for the Sharks so far this season have a combined one goal (Marc-Edouard Vlasic, an overtime game-winner in a 2-1 win over Anaheim on October 25th)) and ten points.  The Sharks defense, as a group last season, accounted for 47 goals (27 by Burns), and four defensemen finished with at least 20 points.  They appear to have some catching up to do.

And that brings us to goaltending and Martin Jones.  Last season, his first as an NHL number one goalie after two years in a substitute role with the Los Angeles Kings, he was 37-23-4, 2.27, .918, with six shutouts.  He finished seventh in the Vezina Trophy voting as the league’s top goaltender.  He stumbled out of the 2016-2017 gate, though.  With a 5-6-0, 2.56, .900 record so far, he is 19th in the league on goals against average and tied for 27th in save percentage among the 38 goalies with at least 250 minutes in goal.  He has been successful in limited exposure to the Caps though, going 2-0-0, 1.00, .964 with one shutout in two appearances against Washington. 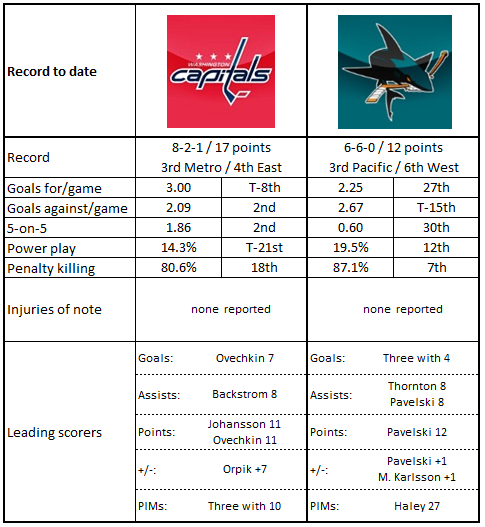 1.  Only the Winnipeg Jets and Minnesota Wild have fewer power play goals scored on the road (one apiece) than the Sharks (2-for-19/10.5 percent).

3.  Three times so far this season, San Jose last games by at least a three-goal margin.  Only four teams have more losses by three-or more goals.  Twice in those situations, the Sharks were shut out (3-0 to Detroit on October 22nd and 5-0 to the Penguins last Saturday).

4.  This could be an interesting test of strength.  The Caps are adept at winning the shots on goal battle with opponents, but so are the Sharks.  They have out-shot opponents ten times in 12 games so far, but they are just 5-5-0 in those games.

5.  Despite a so-so record, San Jose remains one of the best possession teams in the league.  Their 53.80 Corsi-for at five-on-five ranks third in the league, behind Los Angeles and St. Louis.  They are even better on the road with a 55.08 Corsi-for percentage (ranked third; numbers from Corsica.hockey).

1.  The Caps have 13 players with goals of 19 skaters to have dressed.  Zach Sanford, looking for his first NHL goal, is the only forward yet to turn on the red light.

2.  Balance is good, but I might not have though that through 11 games, Nicklas Backstrom, Justin Williams, and Evgeny Kuznetsov would each have the same number of goals as Jay Beagle (one), and Beagle’s is the only game-winner.

3.  The Caps remain the least penalized team in the league in terms of total penalties charged (37) and minor penalties called (343, tied with Carolina).  Their two fighting majors is what drops them to second in penalty minutes per games (7:16; the New York Rangers have 6:00 per game).

5.  From the what-belongs-in-this-group-and-what-doesn’t file.  Three players having appeared in ten or more games so far this season have averaged 0.60 goals per game and as least 1.00 points per game.  Artem Anisimov, Jeff Skinner, and Alex Ovechkin.  Which one is likely to go deepest in to the season above those thresholds?

In his first season with the San Jose Sharks after leaving Washington as a free agent, Joel Ward had a fine season.  He recorded his second career 20-goal season (21) and his second career 40-plus point season (43).  The odd part of that season was that he finished minus-15.  Only two players (Chris Tierney and Patrick Marleau) finished worse in that statistic.  This year, the sluggish plus-minus number remains for Ward (minus-7, worst among forwards), but now his scoring is down considerably.  Ward scored a goal in the Sharks’ 3-2 win over the Columbus Blue Jackets in Game 2 of the season, but that is Ward’s only point of the campaign so far.  He is without a goal on 13 shots in ten games and is minus-7 in those games.  He has not yet seen his ice time suffer for it; in fact it is up a coupld of minutes in his last two games, just two of three games this season when he logged more than 16 minutes.  In six career games against Washington, Ward is 0-1-1, plus-3.

When you are not a big goal scorer, you have to earn your keep doing other things, and often that means doing the little things well and attending to detail.  Beagle’s specialty of sorts is taking faceoffs.  Since he came into the league (briefly) in the 2008-2009 season, Beagle is sixth among active players in faceoff winning percentage (55.8 percent; minimum: 2,500 draws).  Which is not to say he can’t be sa clutch player in the offensive end.  Of his 32 career goals, seven are game-winners (including his only one this season).  That makes 21.7 percent of his career goals of the game-winning variety, the same percentage as more celebrated talents such as Boston’;s David Krejci and Los Angeles’ Jeff Carter.  And, in the 30 games in which he has scored a goal in his career, the Caps have a record of 24-1-5.  In seven career games against San Jose, Beagle is 2-1-3, plus-1, all of his scoring coming in a 5-4 overtime win in San Jose on February 11, 2015 in which, coincidentally, Joel Ward scored the game-winning goal (Beagle assisted on the play).

This might not be the same San Jose Sharks team that went to the Stanley Cup finals last spring, but it is still a dangerous squad.  A team with as much talent as it has – Joe Pavelski, Joe Thornton, Brent Burns, etc. – can make an opponent’s life miserable on any given night.  Their problem has been getting any consistent secondary scoring.  Given their top-notch possession numbers, one would think it would be just a matter of time until their production (scoring) caught up to their productivity (possession numbers).  But the Caps are a skilled team with fine possession numbers of their own.  Even if this represents a bit of a jump in weight class for the Caps in terms of opponent, it is a test the Caps can pass to sweep their home stand.