Philipp Grubauer was the ninth goaltender picked in the 2010 entry draft, going in the fourth round and the 112th player taken overall.  When the horn sounded to end the 2017-2018 regular season, he was a veteran of 101 NHL games, a good chunk of the combined total of games played as the eight netminders taken ahead of him (122).

In between, Grubauer developed a label that is a backhanded compliment of sorts, “best backup goaltender in the NHL.”  In 2017-2018, among 45 goalies playing at least 1,500 minutes, he finished sixth in the NHL in goals against average (2.35), ninth in save percentage (.923), and tied for 15th in shutouts (three, the only shutouts the Caps recorded in the regular season).

It was two different seasons for Grubauer.  The first one lasted five weeks.  In his first eight appearances, Grubauer was 0-5-1 (two no decisions), 3.86, .876.  In his last 27 appearances, starting with a 25-save effort in a 3-1 win over the Tampa Bay Lightning, he was 15-5-2, 1.93, .937, with three shutouts.  Among 50 goalies appearing in at least 20 games over that span, none had a better goals against average than Grubauer or a better save percentage.

While his ten-game segments reflect a solid performance, what is striking (as any Caps fan following all season know) is the increasing reliance on Grubauer.  He got the majority of the work in the last 32 games of the season, representing his last three segments.  He played in 19 of the 32 games, starting 15 of them.  He did not buckle under the weight.  In those 15 starts, Grubauer was 11-4-0, 2.28, .927, and two shutouts. 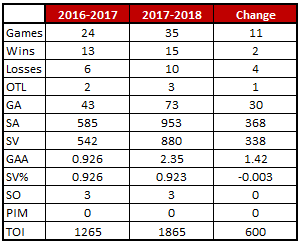 Fearless’ Take… How good has “The Best Backup Goaltender in the NHL” been?  Over the last four seasons, among goalies appearing in at least 75 games, two have a goals against average of 2.25 or less and a save percentage of .920 or better.  Antti Raanta and Philipp Grubauer.

Odd Grubauer Fact… No goaltender in Capitals history having appeared in at least 15 career games (there have been 30) have a better save percentage than Philipp Grubauer (.923) or a better goals against average (2.29).

When the Caps visited Pittsburgh for their last meeting of the regular season, they were closing with a rush.  The Caps were winners of nine of their previous 11 games, outscoring opponents by a 40-29 margin, but they lost to the Carolina Hurricanes, so the task at hand was to avoid consecutive losses since the California trip in early March, when they dropped decisions to Anaheim and Los Angeles.  Philipp Grubauer was given the chore of seeing that did not happen.  He was up to the task with several saves that might have qualified as grand larceny.

There was the save on Evgeni Malkin, who on a first period power play had a clear look from the slot on a feed from Sidney Crosby, but Grubauer got his blocker on it to preserve a 1-0 lead.  There was the save on Sidney Crosby, who on a 5-on-3 power play and the Caps nursing that 1-0 lead took a feed at the doorstep to Grubauer’s left from Phil Kessel, only to have Grubauer flash across and get his left pad on the puck to get it out of danger.  And there was the save in the third period with the Caps up, 3-0, when Jakub Jerabek tried a pass up the middle from the side of his own net and put it on the stick of Jake Guentzel, who fed Crosby for what looked like a shot at a wide-open net.  Grubauer leaned in and smothered Crosby’s shot with his glove without a rebound to keep the Penguins from thinking they were back in the game.  Grubauer finished the game with 36 saves on 37 shots faced in the 3-1 win in what was his 100th game in the NHL.

Sometimes, you just take one for the team.  Philipp Grubauer appeared in one of the Caps’ first five games, allowing four goals on 40 shots in a 4-3 overtime loss to the Tampa Bay Lightning.  The Caps going with a “two-on, one-off” pattern for number one goalie Braden Holtby, it was Grubauer’s turn when the Caps visited the Flyers.  For Grubauer and the Caps, it started bad, got worse, and then got worse still.

The Flyers scored on two of 13 shots in the first period, wrapped around a goal by Jakub Vrana.  The second one was a killer.  On a power play, Nicklas Backstrom poked a loose puck back to John Carlson on the Caps’ side of the red line.  He tried to sweep the puck across the ice to reset the play, but Scott Laughton got his stick on it and sent it into the Caps’ end.  Grubauer came out of his crease to try and beat Laughton to the loose puck, but his dive was in vain, and Laughton collected the loose puck and tucked into the vacated net for a shorthanded goal to put the Flyers up, 2-1, at the first intermission.

The Flyers poured it on in the second period, scoring three times on 11 shots, and they wrapped up an 8-2 win with another three goals on 13 shots in the third period.  Grubauer became just the fifth goalie to allow eight or more goals in a game for the Caps in what would be the eighth instance for such a goalie over the last 30 years (Olaf Kolzig suffered it three times, Brent Johnson twice).  Only Johnson and Mike Liut suffered doing so while facing fewer shots (30 by Liut in allowing nine goals in a 9-4 loss to the Calgary Flames on October 27, 1990; and 27 by Johnson in an 8-5 loss to the Buffalo Sabres on November 17, 2005).  For Grubauer, the eight goals allowed represented 11 percent of the total he allowed (73) in 35 games.

Postseason… Philipp Grubauer’s stretch run, coupled with Braden Holtby’s curious slump (at one point losing six straight decisions in February) left head coach Barry Trotz with what might have been the most important decision he would make as head coach of the Caps, who to start for the postseason.  It was a daring pick to choose Grubauer, even with the records of the two goaltenders over the last two months of the season.

In this instance, Grubauer did not rise to the occasion.  He started Games 1 and 2, allowing eight goals (four in each game) on 49 shots to post a woeful .837 save percentage.  It was enough for Trotz to return to Holtby, and the rest, as they say, is history.

Even with the disappointing postseason for Philipp Grubauer on a personal level, he finished his body of work as arguably the second-best goaltender in the Rock the Red era of Capitals hockey (since the 2004-2005 lockout).  Some might argue he was better than Braden Holtby, on balance, but he had neither the volume of work nor the consistency of success in the postseason that Holtby has had (save for Holtby’s 2017 postseason).

Nevertheless, Grubauer, if not the best understudy goaltender of the last five years, is on a very short list.  He has earned his opportunity to assume the duties of a number one goaltender.  He could find himself in that position as a member of the Colorado Avalanche, to whom he was traded after the Stanley Cup win for the Caps.  It was a trade long anticipated – the door standing ajar, if you will.  Now, he gets to welcome the new experience.  Time will tell if ecstasy is a part of it.