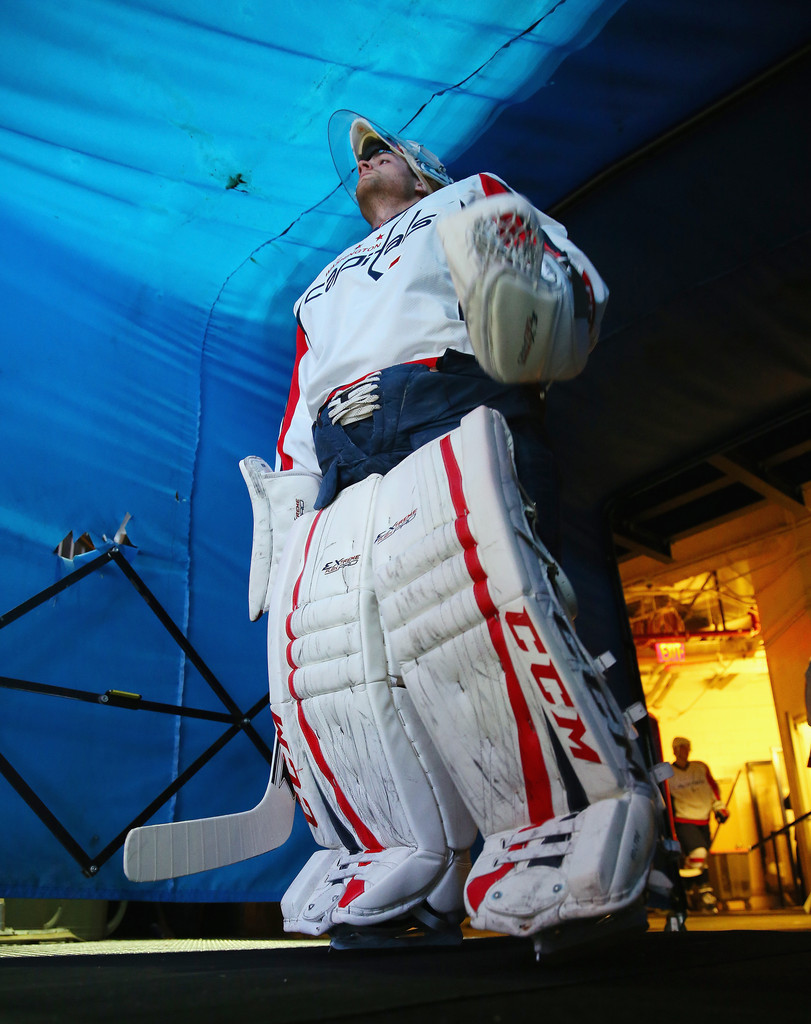 “…you have an all-out prize fight, you wait until the fight is over, one guy is left standing. And that's how you know who won.”
-- Al Capone in "The Untouchables"

In the 2008 NHL Entry Draft, nine goalies were selected ahead of Braden Holtby, who was picked 93rd overall by the Washington Capitals.  At the time, there were no fewer than five goalies were ahead of Holtby on the Capitals’ depth chart – Jose Theodore, Brent Johnson, Semyon Varlamov, Michal Neuvirth, and Daren Machesney.

Five years later, Theodore, Johnson, Varlamov, and Machesney have moved on, and Holtby is at the top of the heap, having come out on top in his mano-a-mano competition with Michal Neuvirth over the past two seasons.  In 2013 Holtby was the number one goalie from start to finish for the first time in his third season with the big club.  Not that it came with a sense of certainty attached to it.  In parts of the previous two seasons Holtby appeared in only 21 regular season games.  Despite some sparkling numbers – 14-4-3, 2.02, .929, with three shutouts in those 21 appearances – it took his post-season performance in 2012 (1.95 GAA/.935 save percentage in 14 games) to lift him into the lead in the goalie competition going into 2013.

The Great Lockout of 2012-2013 left Holtby plying his trade in Hershey with the AHL Bears, where he had an iffy 12-12-1 record, but with a 2.14 goals against average and a .932 save percentage.  Both the GAA and save percentage would have ranked him fourth in the AHL had he qualified in the end-of-season rankings.

When the NHL season got underway in January, the jump to stiffer competition did not agree with Holtby.  He appeared in the Caps’ first two games but allowed ten goals on 73 shots (.863 save percentage).  It earned him a seat for five games and put his position as number one goalie in jeopardy.  Michal Neuvrith had struggles of his own, not reaching the .900 level in save percentage in any of those five games.  Holtby returned in Game 8 of the season but continued to struggle into his second ten-game segment of the season.

However, starting with a 38-save effort in a 2-1 loss to the New York Rangers on February 17th, Holtby’s season began to turn around.  His ten-game splits improved significantly over his first ten-game split.  Over his last four splits he did not record a save percentage lower than .916, and he dropped his goals against average from 4.52 in his first ten-game split to 2.58 by season’s end.   In those last four splits Holtby was 22-9-1, 2.34, .927 with four shutouts.  Holtby was clearly the number one goalie in Washington.

Game to Remember… March 21/22 at Winnipeg.  When the Caps headed to Winnipeg for a back-to-back set of games in Manitoba – a scheduling quirk as a result of the lockout – they had just come off one of their best games of the season but had nothing to show for it.  They fought the Pittsburgh Penguins to a draw over 50 minutes, holding the mighty Penguins to a single goal.  Then, just after a Caps power play expired, Matt Niskanen took a feed from Matt Cooke and wristed a puck that just cleared a sliding Karl Alzner and eluded Braden Holtby’s glove for the game-winner in 2-1 loss.  The Caps were still buried in the standings, 14th in the East and nine points behind the Winnipeg Jets, who they would visit for this back-to-back.

Getting swept in Winnipeg probably would have ended the competitive portion of the season for the Caps, since they would have been 13 points behind the Jets with 27 games to play.  But that was not what happened.  The Caps swept the Jets, due in large part to Holtby holding the home team to one goal on 51 shots over the two games, the lone Jets goal coming in the third period after the Caps had built a 5-1 lead in Game 2 of the set.  His shutout in Game 1 of the set was his second straight over the Jets in 2013.

Game to Forget… February 3rd vs. Pittsburgh.  If the March 19th game against the Penguins was one of the best the Caps played to that point in the 2013 season, it was due in part to the game against the Penguins on February 3rd being among the worst.  Holtby was particulary tormented by Chris Kunitz.  First it was a tip in off a point shot less than four minutes into the game.  Then it was a snap shot from the top of the left wing circle to give the Penguins a 4-2 lead.  Six minutes later, with the Pens on a power play and Karl Alzner without a stick – making it effectively a 5-on-3 – it was one-timer from the bottom of the left wing circle.  Finally, it was a one-timer from the slot that beat Holtby on the last shot he faced on the day for Kunitz’ fourth goal of the game.  Holtby allowed six goals on 26 shots in the 6-3 loss.

Post Season… It would have been hard for Braden Holtby to improve on his numbers from the 2012 playoffs (1.95, .935).  Only five times in 14 games in 2012 did he allow more than two goals.  He was not far off, though, in 2013 (2.22, .922).  Here is the thing, though.  Until Game 7 he was better than last season, a 1.77 goals against average and a .938 save percentage.  Then there was Game 7.  It was a classic case of a team – the Caps – dominating the game early, but unable to capitalize on Holtby’s opposite number, Henrik Lundqvist.  When the momentum changed, the Rangers capitalized – often.  New York scored five goals over a span of 33:20 from 13:19 of the first period (on a goal from an unlikely source: Arron Asham) to 6:39 of the third (again from an unlikely source: Mats Zuccarello).  Holtby and the Caps picked the wrong time to suffer a team-wide collapse.

Let’s compare a couple of goaltenders and their first three regular season in the league:

Not much separating them, is there?  Now, let’s look at the same two goalies in the post season over those three years:

Goalie A has better numbers overall (not that the win-loss record reflects it) and is more consistent (Goalie B has those two shutouts in 19 games, but almost a half-goal higher GAA).  Who are they?

Goalie A is Braden Holtby, Goalie B is Semyon Varlamov in his first three seasons in the league, all with Washington.  Varlamov was sent to Colorado after that third season, in no small part due to stories that if he was not the Caps’ number one goalie, he would consider going to Europe to play.  Holtby, on the other hand, is something of the “last man standing,” having climbed up the depth chart until he stands now as the Caps’ number one goalie.  At the moment, there is no question who won.

The Cup vs. The Finals, Stanley vs. Larry... Does Format Matter? (Oh, and a prognosto) 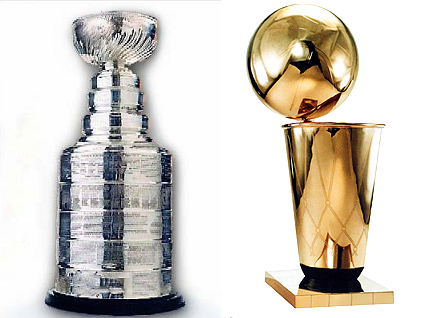 The Stanley Cup Playoffs get underway tonight, and it is a good time to do a little comparison between the NHL and NBA in terms of their finals formats.

In 1985 the National Basketball Association changed its finals format to a 2-3-2 arrangement of the seven games -- Games 1 and 2, and Games 6 and 7 played on the higher-seeded team’s home court.  The National Hockey League had a similar format in 1985 but moved to a 2-2-1-1-1 format the following year and each year thereafter.

In those 27 years since 1986 that the leagues have been employing different formats in their respective finals (26 seasons in the case of the NHL owing to The Great Lockout of 2004-2005), they have paved somewhat different roads in crowning champions.

At first blush, there seems to be no difference between the leagues in terms of the season’s ultimate game.  In the NBA the Larry O’Brien Trophy was awarded to the league champion in the vanquished team’s arena 12 times in 27 seasons.  In the NHL the Stanley Cup was presented to the captain of the league champion 13 times in the opponent’s rink.  Away teams have done quite well in clinching titles.

Did it make a difference?  In six four-game sweeps over the past 26 seasons – that fourth game played on the lower-seeded team’s ice – the home teams and the away teams split those six decisions, three apiece.  In five-game series – games played on the higher-seeded team’s ice – the home teams won three times, the away teams twice.  In short series, at least in these 11 instances, it hardly seems to have mattered much what seed or on whose ice the Cup-clinching games were played.

In long series seeding starts to matter more.  Over the last 27 seasons the NBA has played 16 series that have gone to at least a Game 6, meaning that those series always end on the higher-seeded team’s floor.  In those 16 instances, 12 times the higher-seeded team (the home team) won.  And here is where the format seems to come into play, if only a bit.  The championship was won in the NBA finals 12 times in Game 6 – again, the home team’s floor – and in eight of those instances it was won by the home team.

But then go to the Game 7 results.  Only four times in 27 seasons has an NBA final gone to seven games.  In each of those instances covering a span of 23 seasons (from 1988 to 2010) the home team won Game 7.  Finals series do not generally reach a Game 7 because home teams clinch in Game 6.

The difference carries over into Game 7 as well.  Eight times in the last 26 seasons (six times in the last 11) the Stanley Cup finals have gone to a Game 7.  Six times the home team – the higher seeded team – won the Cup, although it is worth noting that the two instances in which the visiting lower-seeded team won the Cup came in the last two Games 7, in 2009 (Pittsburgh, in Detroit) and in 2011 (Boston, in Vancouver).

The differences between the NBA and NHL in format seem to be that the 2-3-2 format that grants NBA teams the extra late home game in a long series acts as an accelerant to the effects of being a higher (and presumably better in most years) seed.  Higher-seeded teams are more likely to end their series in Game 6, if not sooner.  In the NHL, seeding matters, but format seems to serve to extend series in the form of more Games 7.

In historical context, here is what you might look for in the Boston-Chicago series.  First, no team has been swept since Detroit swept Washington in four games in 1998.  In the 13 Stanley Cup finals since, the Cup has been won by the higher-seeded team ten times.  And it did not matter where that Cup-clinching game is played.  Twice the higher-seeded team clinched at home Game 5 (2002 by Detroit, 2007 by Anaheim), four times on the road in Game 6, and four times on home ice in Game 7.

This trend is mitigated somewhat by the history since the league’s lost 2005 playoffs.  In seven tournaments since then, the lower-seeded team has won the Cup three times, all of them coming in the last four playoffs, twice in Game 7.  But is that the start of a new trend, or an anomaly?  We just hope the NHL doesn’t follow in the NBA’s footsteps with the 2-3-2 format.

Posted by The Peerless at 9:09 AM No comments: