The Peerless Prognosticator is ON THE AIR!!! -- Game 72: Capitals at Sharks, March 22nd

The Washington Capitals wrap up their California trip with a visit to SAP Center and the San Jose Sharks. Whether called by its original name, the “San Jose Arena,” or by “Compaq Center at San Jose,” or “HP Pavilion at San Jose,” or "SAP Center," the edifice at 525 West Santa Clara Street in San Jose has been nothing less than a house of pain for the Washington Capitals.

The Caps won the first game they ever played in that building, a 4-2 win over the Sharks on October 30, 1993. They must have offended the hockey gods in doing so, for since then the Caps have yet to record their second win in that building. They are 0-11-1 since that lone win and have been outscored, manhandled in fact, by a margin of 46-23.

How long has it been since the Caps won in San Jose? Well, now that you asked…

How bad has it been? Rick Tabaracci was the last netminder to win in San Jose, stopping 25 of 27 shots in a 4-2 win. Since then…

Oh, and like the offense has been outstanding? The Caps have 23 goals in 12 games since their last win in San Jose, those goals being spread among 19 different players. Only four Capitals have had as many as two goals scored in that time – Sergei Gonchar, Joe Juneau, Jaromir Jagr, and Alex Ovechkin. Only Jagr among that group has a two-goal game, that coming in a 5-4 loss to the Sharks on March 15, 2002.

And now, the Caps get to try again. This San Jose team is every bit as formidable as those of recent vintage that have wreaked havoc on the Caps. In this game the Sharks will have a chance to reach the 100-point mark for seventh time in the last nine full 82-game seasons. Their .697 standings points percentage ranks second in franchise history to the .713 mark set with the 53-18-11 team that finished with 117 points in 2008-2009. They would seem a lock, having 46 wins with 11 games remaining, to reach the 50-win mark for the fourth time in franchise history.

As if they needed any help against the Caps, the Sharks come into this game on a roll. San Jose has won seven of their last eight games and are 11-2-1 over their last 13 contests. They have the best home record (26-5-4) in the Western Conference, and only Boston (28-7-2) has a earned more points at home in the league.

In winning seven of their last eight games, San Jose outscored their opponents by a 28-16 margin. Their special teams have been uneven in their run, the power play going just 3-for-28 (10.7 percent) over those games, while the penalty kill has been 18-for-21 (85.7 percent) and just had a string of 16 straight kills broken by Anaheim on Thursday.

San Jose features what is now a scary trio of forwards. Of the 28 goals scored by the Sharks over their last eight games, three of them were scored by a line of Joe Thornton, Joe Pavelski, and Brent Burns. At least two of those three figured together in six other goals. Thornton is 3-7-10 over those eight games, Pavelski is 2-6-8, and Burns is 5-3-8. Thornton (69) and Pavelski (67) each have more than 60 points this season. Add in Patrick Marleau (61 points), and the Sharks are one of just three teams (Chicago and Pittsburgh being the others) featuring three 60-point players.

The Sharks might have a fourth player in that 60-point club, but Logan Couture has missed 16 games with a hand injury that required surgery. As it is, Couture has 46 points in 55 games, a pace that would put him at 59 points had he dressed for all of the Sharks’ games to date.

This quintet has done quite well against the Caps.  Thornton, Pavelski, Burns, Marleau, and Couture have a combined 75 man-games of experience against the Caps and have a scoring line of 27-44-71.

Here is how the teams’ numbers stack up against one another… 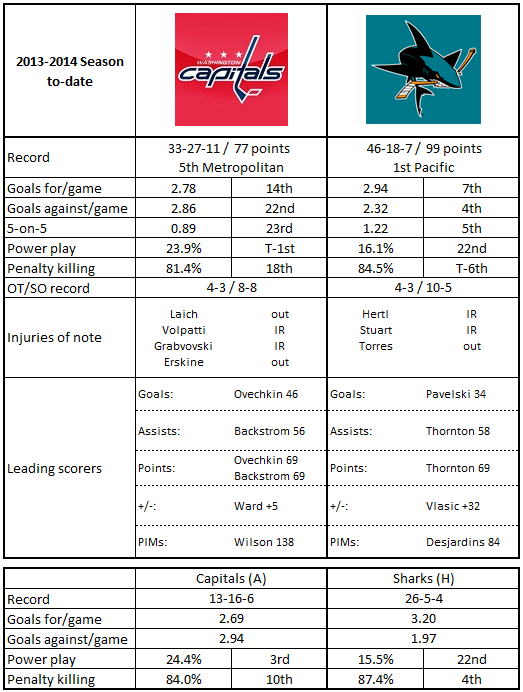 1.  Los Angeles squeezes the life out of teams.  San Jose electrocutes them.  They are fourth in the league in 5-on-5 goals scored; they lead the league in goals scored in the first period; only three teams have more wins when scoring first in games than the 33 held by the Sharks.

2.  If the Caps are going to allow shots, the Sharks will be thrilled to accept the gift.  San Jose leads the league in shots on goal per game (34.9) and has the second-best record in the league when outshooting teams.  The Sharks have 33 wins when outshooting opponents; the Caps have outshot opponents a total of 22 times (winning 11 times).

3.  And don’t think about getting the jump on the Sharks.  Only St. Louis (10) and Chicago (7) have fewer multiple goal losses this season than the Sharks (11).

4.  San Jose is a very disciplined team when it comes to the rule book.  No team has taken fewer minor penalties.  Consider that the Sharks have taken 207 minors in 71 games, while the Caps have taken 281 (25th in the league).  No team has found itself shorthanded less frequently than the Sharks. Again, consider that the Sharks are first with just 187 times shorthanded, while the Caps are 25th with 253.

1.  The Caps were 0-for-3 on the power play against Los Angeles on Thursday, making them 11-16-8 in games in which they do not score a power play.  Washington is 0-3-2 in their last five such games.

2.  Jaroslav Halak has allowed two or fewer goals in five of his seven appearances with the Caps and in nine of his last 12 appearances dating back to January 28th when he pitched a 3-0 shutout at the New Jersey Devils for the St. Louis Blues.

4.  Washington has allowed 135 goals at 5-on-5 this season.  Of the nine teams having allowed more, only Toronto (139) is currently in the top-eight in in their conference, and the Maple Leafs are looking shaky.

He is not spectacular, but he wins.  Since he dropped three in a row back in early December, Antti Niemi is 19-9-0 in 29 appearances in goal and has not lost so much as consecutive games, let alone had a losing streak.  Over those 29 games he has a 2.57 goals against average and a .914 save percentage. Again, not spectacular.  But Niemi has been consistent.  Only five times in those 29 appearances did he allow more than three goals, only once as many as five.  He does not often wow the crowd (two shutouts in those 29 games), but neither does he often disappoint.  He wins, more often than any goalie in the league in fact (35).  He is 4-0-1, 1.75, .938 with one shutout against the Caps in his career.

In back-to-back games against Philadelphia earlier this month Mike Green had a goal and four assists.  Since then… crickets.  Green has one goal in his last eight games and is a minus two and has been on ice for five of the 18 goals scored against Washington.  The Caps are 4-3-1 over those eight games, but more of a contribution from Green  the Caps might have another win or so under their belt and would be on the good side of the playoff divide.  Green is 0-1-1 in four games against the Sharks over his career.

1.  An Ounce of Prevention.  Given the recent history of these clubs in this building, the first order of business is not to let San Jose get away.  Stay with them, prove you can compete. Keep them out of your net early.

2.  Average Joe.  Joe Thornton is one of the most accomplished set-up men in the recent history of the NHL.  Only one player since the 2005-2006 lockout has played in at least 200 games and has more assists per game than Thornton.  Sidney Crosby has averaged 0.90 assists per game to Thornton’s 0.85.  Hold him below his average, and the Caps have a chance.

3.  When Opportunity Knocks.  San Jose does not spend much time killing penalties.  Plainly put, when they do have to go shorthanded, the Caps have to convert.  This might have to be a 1-for-2 or 2-for-3 power play sort of game for the Caps.

Everything that has a beginning has an end.  I see the end coming, I see the darkness spreading.  I see death.

OK, you “Matrix” fans will recognize that quote from The Oracle,” but tonight it applies to the San Jose winning streak against the Caps.  It’s time.

Posted by The Peerless at 7:49 AM No comments: