The Peerless Prognosticator is ON THE AIR!!! -- Game 62: Capitals at Sabres, February 23rd

Twelve days and 5,000 miles to get to… Buffalo.  Not exactly the pot o’ gold at the end of the rainbow, but upstate New York is where the Washington Capitals’ season-long six game road trip will end on Saturday afternoon.  The Caps will be trying to earn their fourth win on the trip and their third consecutive game overall for the first time in a month.

Buffalo is coming off a road trip of their own, dropping all three games to extend their losing streak to four games overall (0-3-1).  Winning consecutive games has become a challenge for the Sabres, who have not done so since Games 31-32 in December.  Since then, when they reached their high-water record for the season at 19-9-4, the Sabres are 9-15-4, fifth-worst record in the league over that span.

Unsurprisingly, the Buffalo problem is at both ends of the ice, being a bottom-ten club in goals scored over that span (72/sixth-fewest) and goals allowed (93/tied for tenth-most, with Pittsburgh).  On the offensive side of the ledger, the Sabres are continuing to get top notch goal scoring from Jeff Skinner who, with 36 goals this season to date, is within one goal of his career-best – 37 with Carolina in 2016-2017.  In this 28-game slide, Skinner has 14 goals, most on the club.  The trouble is, however, that Skinner has the worst plus-minus on the club in that span among forwards (minus-16), and only Anaheim’s Ryan Getzlaf among all league forwards has a worse plus-minus over that span (minus-27).  It is a reflection of the broader issues the Sabres have had over the last two months, Skinner having gone plus-19 in his first 32 games as the Sabres were getting off to that hot start.

That Skinner should find himself on the brink of setting a career high in goals is surprising in one respect.  He started the season without a goal in his first six home games.  However, he followed that up with goals in his next six home games (a total of eight) and has 20 goals in his last 24 games on home ice.  Skinner is 12-13-25, minus-3, in 39 career games against Washington.

Ristolainen has also been part of a run of struggles in Buffalo, too.  He is one of 12 defensemen in Sabre history to have at least five seasons in their first six with a plus-minus of minus-10 or worse.  His career minus-125 is worst in team history among defensemen, and his minus-23 for the season is tied for third-worst among all league defensemen.  In 13 career games against the Caps, Ristolainen is 0-6-6, minus-5. 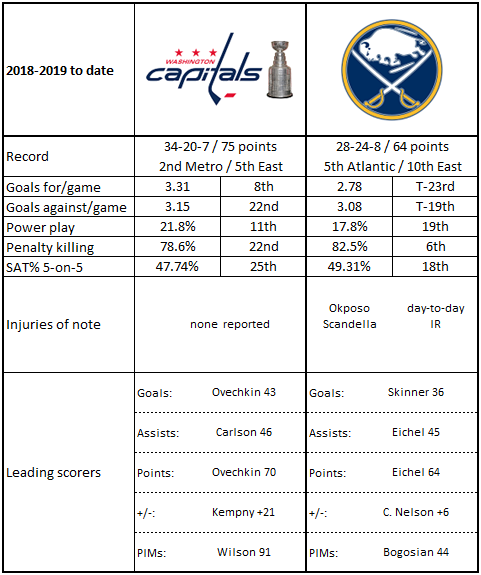 1.  Buffalo is feast or famine on home ice.  Over their last nine games at KeyBank Center, they have allowed opponents five or more goals four times, and they have held them to a single goal three times.

2.  The Sabres, despite their recent difficulties, remain one of the better teams overall on home ice.  Their 17-9-4 overall record is sixth-best in the Eastern Conference and compares favorably with the Caps, for instance, who are 17-9-5 (fifth-best).

1.  The Caps will be trying to earn their 18th road win of the season.  If they do so, they will have more wins on the road than they do at home (17).  Through Thursday’s games, six teams in the league had more road than home wins: Toronto, Columbus, St. Louis, Minnesota, Colorado, and Arizona.

2.  Washington has the third-worst differential in shot attempts-for at 5-on-5 (minus-240) when leading, ahead of only Ottawa (minus-316) and the New York Islanders (minus-328), an indicator of their easing up off the gas when leading in games.

3.  After a ghastly three-game stretch on the road in which the Caps allowed 21 goals, they have allowed only 12 goals in five road games since then.

4.  The Caps care not about intimidation on an opponent’s ice sheet.  They have scored four or more goals 15 times on the road this season, third highest in the league, trailing only Tampa Bay and Toronto (18 times apiece).

5.  Despite a 17-11-2 record on the road, the Caps are the only team among the top ten in standing points earned on the road with a negative goal differential (minus-4 on 98 goals for, 102 against).

Rasmus Dahlin gets more attention, and Rasmus Ristolainen is the workhorse, but the Buffalo defenseman most familiar to Caps fans might be Zach Bogosian.  Since he came into the league in 2008-2009, only eight defensemen in the league have faced the Caps more often than Bogosian, who has done so 32 times.  This season, he is enjoying a comparatively injury-free season for the first time in quite a while.  Durability has been an issue with Bogosian over much of his 11-year career.  With 53 games played so far this season, he is on a pace to top 60 games played for only the third time in the last six years and only the second time in four years in Buffalo.  His presence in the lineup matters, too.  In 11 games in which he logged at least 24 minutes, the Sabres are 7-2-2, while they are just 5-8-0 in games in which he skated less than 20 minutes.  In those 32 career games against the Caps, Bogosian is 3-7-10, minus-8.

Capitals fans are likely to get their first look at Carl Hagelin in a Caps’ sweater on Saturday.  Perhaps the change in wardrobe will do him good, at least in the offensive end.  He did not post a goal over his last 11 games with the Kings and is just 1-2-3, minus-3, in 17 games of the 2019 portion of the schedule.  His trade to Washington was his second in barely three months, having been traded to Los Angeles from Pittsburgh for Tanner Pearson last November.  It has been a frustrating season for Hagelin who, in addition to the moves, missed 20 games with a sprained knee ligament in December and January.  That has held him to 38 games played overall and would appear to ensure that this will be his least productive offensive season.  With two goals and eight points in those 38 games, it would require quite a push even to equal the 6-16-22 season he had in 61 games with Pittsburgh in 2016-2017.  That season set off an odd change in Hagelin’s offensive profile.  Over his first five NHL seasons, he was a respectable, if not a remarkable 9.4 percent shooter in 346 games.  Starting with that 2016-2017 season, however, Hagelin is shooting only 5.0 percent in 180 games over three seasons as he joins the Caps.  He is 7-3-10, plus-10, in 21 career games against Buffalo.

Going 3-3 on a road trip is not the worst outcome, given the length of the trip.  However, how a team gets there matters.  If the Caps get there by losing to the Sabres, a struggling team at the moment, it would be a disappointment.  But this is a difficult venue for the Caps, who have split their last four decisions in Buffalo (2-2-0) and are 11-10-2 there since the dark 2004-2005 season.  The Sabres have suffered what young teams with talent often seem to do.  They could not sustain a good start into the grind of the winter months.  This is, after all, a team that has dressed ten skaters younger than 25 this season.  And, it is not as if one part of their game has collapsed.  It has been more a case of their sagging at both ends of the ice.  That spells trouble for the rest of the season, suggesting that this club is not yet mature enough to grind out wins over the long haul.  It is a situation a veteran team such as the Caps needs to take advantage of to make this a truly successful road trip.