On the Matter of Alex Ovechkin's Consistency -- Part III: The "38th Parallel"

We have been looking at the mysterious decline in the production of Alex Ovechkin, first looking at what might be “pivot points” – specific instances or occurrences that might have influenced a decline in his production. Then we took a graphical look at his production to see if it was possible to home in on where it started or what might have been associated with it. Taking a cursory look at seven pivot points was not conclusive, and the graphical examination of the production data suggested that the decline in production started late in the series of 500 games (broken into ten-game segments). But intuitively, you probably would have or did arrive at the same conclusions.

Ovechkin’s production data do, however point to a point in time – a rather specific one as it turns out – where his production started a persistent slide. First, let’s look at the ten-game segment data:

As we noted, Ovechkin displayed a remarkable consistency in putting up goals and points as reflected in his ten-game segments. But they do break down into two large segments. In his first 38 segments covering 380 games, Ovechkin recorded at least six goals (roughly a 50-goal pace) 29 times. In fact, he recorded at least six goals in each of his last 12 ten-game segments, topping ten goals in a segment three times.

In those first 38 segments he recorded at least 13 points (a 100-plus point pace) 25 times and did so nine times in the last 12 of those 38 segments. He recorded 15 or more points (a 120-point pace) eight times in those 12 segments. After that 38th segment Ovechkin managed to finish in double-digits in points nine times, suggesting a consistency but at a diminished level of production. That is buoyed up by his ability to continue recording assists (as noted in Part II, that was trending up, despite a recent drop-off).

It would seem clear, then, that there is a goal-scoring drop-off that takes place after his 38th ten-game segment. This can be represented in a slightly different way graphically, looking at a moving 82-game progression starting with Game 82 of Ovechkin’s career (click on the picture for a larger image): 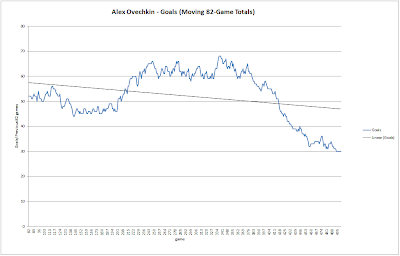 There is something that almost leaps off this graph. From Game 221 through Game 381, Ovechkin’s 82-game totals were 60 goals or more 142 times over the 161 games. In fact, he had a goal total of 65 in his previous 82 games as late as Game 375. To go almost two full seasons as what amounts to a consistent 60-goal scorer is unheard of in this era. But the end of that came swiftly, and soon after that Game 375.

Game 378 for Ovechkin came on February 13, 2010. It was a somewhat non-descript game. The Caps lost to the St. Louis Blues, 4-3, in a Gimmick. Ovechkin finished with 25:20 in ice time, his eighth consecutive game with over 20 minutes of ice time. He finished without a point, breaking a streak of nine games with at least one point and 18 of 19 games with at least one point. Despite the clean score sheet, this was not a player about to embark on a decline in his production. So what is significant about that game? It was the last game before the break for the 2010 Winter Olympic Games in Vancouver.

And there is the line of demarcation between the Alex Ovechkin we knew and the one we know. The 38th ten-game segment straddles the Vancouver Olympic break. Since then, his goals and his shots on goal have fallen off the proverbial cliff. Look again at the graphical representations: 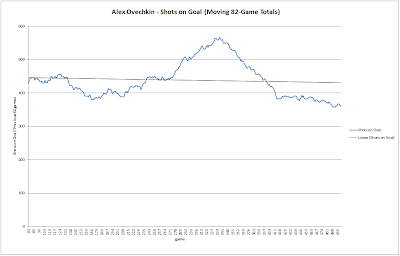 In the 12 ten-game segments since the 2010 Games, the measures we have been using to gauge production have been depressed:

And there are the shots on goal. If you look at those 38 ten-game segments preceding the Vancouver Games, Ovechkin averaged 54.8 shots per segment, 5.5 shots per game. In the 12 ten-game segments since he has averaged 44.2 shots per segment, 4.4 per game. A 1.1 shot per game difference does not sound like much, but remember that Ovechkin has not been an especially efficient shooter in his career. At his shooting percentage in his first 38 ten-game segments (12.5 percent), the drop in shots per game would explain about half of his drop in goals from a 56-goal pace per 82 games in the first 38 segments to a 33-goal pace in his last 12 segments (10.9 goals per 82 games).

The rest of the decline might be a function of poor shooting percentage overall. In his last 12 ten-game segments Ovechkin is converting shots into goals at a 9.1 percent pace, and the drop is more marked since the beginning of the 2010-2011 season (8.7 percent).

A recurring theme revolving around Ovechkin’s drop in production – almost entirely a function of a drop-off in goal scoring – is that teams have “figured him out.” The thought here is that Ovechkin’s go-to moves are well-defined, well-scouted, and now well-defended. There is a kernel of truth in that, if you associate a drop in shooting percentage with his being pushed to places on the ice from which he is not effective in scoring, or that goaltenders have compiled a book on him in terms of his favorite spots from which to shoot and can position themselves accordingly (seen a lot of those one-timers from the circle on the power play going in lately?).

But that might explain only about half of the drop in his production. With that drop in production Ovechkin could – should – still be a 40-45 goal scorer. But for whatever reason, that break in his career associated with the Olympics in Vancouver was in fact the pivot point we were looking for. Before that, he was a scoring monster right up until that break. After that experience, his production has not come close to approximating that level.

There is no shortage of pundits who will, and have opined that the Vancouver experience had its effects on Ovechkin. We are not among them. We will not play pop psychologist and engage in speculation as to what effects that experience might or might not have on a player’s intangibles. But that point serves as a rather bright line between two stages of Ovechkin’s career as a goal scorer. The data stand on their own merits. Whatever player he was before those Games, he has not been that player since.
Posted by The Peerless at 2:55 PM 11 comments:

The Peerless Prognosticator is ON THE AIR!!! -- Game 30: Capitals at Jets, December 15th

Twelfth place. Twelfth freakin’ place. When this team was assembled in training camp, you would have had to be drunk beyond consciousness or perhaps Don Cherry to think it was possible that as the Caps gear up to play their 30th game of the season they would be in twelfth place in the Eastern Conference.

But there is where they sit as they head off to the balmy climes of Winnipeg. The Caps are 8-11-1 since November 1st, 3-3-0 since the beginning of December. They have not won three games in succession since starting the year 7-0-0. That kind of thing that can play on men’s minds, even the strongest and most refined athletes. It can be…


“The mind is a strange thing, men. We must begin by asking it... What is losing? Losing is a disease...
...as contagious as polio.”
Didn’t I see you trying this on a baseball team?

Here is how the teams line up against one another: 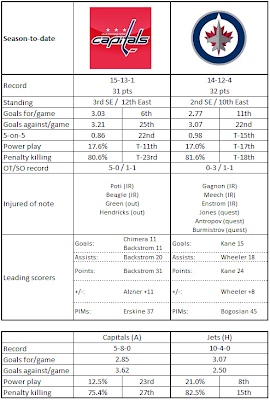 3. Winnipeg has the fourth worst takeaway-to-giveaway ratio on home ice (0.50).

4. If the result is a blowout, it is not likely to end well for the home team (humor me). Only six teams have a worse winning percentage in games decided by three or more goals (3-6, .333). Of course, one of the wins came against the Caps.

5. Winnipeg is second in the league in first period goals scored. Overall, they are plus-9 in goals scored/goals allowed in the first period. They are minus-6 in the second period, minus-9 in the third period, and minus-3 in overtime (they have yet to score an overtime goal). This is not a team that finishes well.

2. Washington is a mirror image of Winnipeg in this respect – minus-5 in the first period, goals scored to goals allowed; minus-7 in the second period; plus-2 in the third period; and plus-5 in overtime (they have yet to allow an overtime goal). The Caps’ best bet at the moment might be to take this game to overtime.

3. Only six teams have been shorthanded in the second period more often than the Caps. It probably goes a long way to explaining why the Caps have allowed the fifth highest total of second period goals.

The youngster is hot. He has not had consecutive games without a point since November 6-8. Since then he is 10-6-16, plus-7, in 15 games. He has one game-winning goal among those ten (against the Caps…natch). He has seven goals in nine career games against the Caps.

Before the season is over, Michal Neuvirth is going to have to demonstrate that he can be either a reliable backup goaltender or able to jump into the top role when number one goaltender Tomas Vokoun falters. Vokoun had a shaky outing against Philadelphia on Tuesday, and this could be an opportunity for Neuvirth to step up. In his last eight appearances, including 20 minutes of mop-up duty against the Flyers on Tuesday, Neuvirth is 1-4-1, 4.03, .864. Among 44 qualifying goaltenders, Neuvirth ranks last in the league in both goals against average (3.73) and save percentage (.875). He has nowhere to go but up, and this would be a fine time to head in that direction.

1. Don’t make this game “special.” The Caps rank in the bottom third of the league in both power play and penalty killing on the road. No playoff-eligible team in the East ranks so low in both categories.

3. Shoot, not cute. There is that record when the Caps outshoot the opposition – 9-5-0. Stop being cute, get pucks to the net. Good things happen.

In the end, absent a blockbuster trade, this is the team the Caps are. They’ve done the “change coaches” thing. It is on the players now. It probably always has been. And it is the players who have to take the initiative to get out of this 20-plus game funk they have been in. Winnipeg is a club that despite a so-so record has played the Caps tough over the past couple of years. The Caps have had a particular problem solving goalie Ondrej Pavelec. It is time to figure it out, both against this team and in general.