The Peerless Prognosticator is ON THE AIR!!! -- Game 25: Canucks vs. Capitals, November 23rd

The Washington Capitals open a three-game home stand on Saturday afternoon when they host the Vancouver Canucks at Capital One Arena.  The Caps have slipped a bit of late, splitting their last four decisions and losing in their last contest, a 4-1 loss to the New York Rangers, the first time they lost on the road in regulation in almost six weeks, since a 6-5 loss in Nashville to the Predators on October 10th.  Vancouver, who got off to a surprising 9-3-2 start to the season, has just two wins in their last nine decisions (2-5-2), but one of them was a 6-3 decision in Nashville on Thursday night. 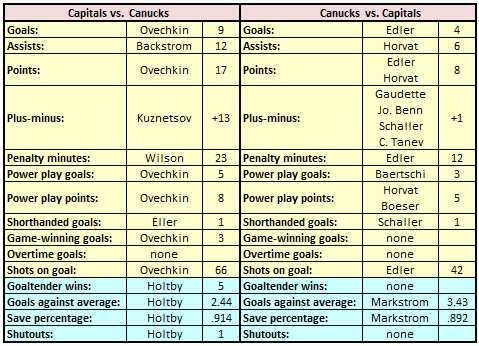 Last season, 20-year old Elias Pettersson won the Calder Trophy, the second winner of the rookie-of-the-year award in Vancouver Canuck history and first since another 20-year old – Pavel Bure – won the award in 1992.  He led all rookies in goals (28), assists (38), points (66), power play goals (10), power play points (22), game-winning goals (7), shooting percentage (19.4; minimum: 50 shots), and led all rookie forwards in average ice time (18:14).  His winning was no fluke.  And, while Vancouver struggled to a 35-36-11 record last season, his performance gave an indication that he would be the straw that stirs the drink for the Canucks.  Vancouver was 25-13-5 in those games in which he recorded a point, 5-19-4 in the games he played in but did not score a point.

The only skater younger than Pettersson to take the ice for the Canucks this season is defenseman Quinn Hughes.  The seventh-overall pick of the 2018 Entry Draft got a peek at the NHL last season as a 19-year old, posting three assists in five games.  This season, he has come on like gangbusters.  He is second among rookie skaters with 17 points, trailing only fellow defenseman Cale Makar.  He leads all rookie skaters in power play points (12), and he is second in average ice time (20:04) only to Edmonton defenseman Ethan Bear (21:07).  Quinn is tied fourth among all defensemen in multi-point games (five), and unsurprisingly the Canucks have points in all of them (4-0-1).  There is still work to do, though, to become a foundational defenseman.  The Canucks are just 1-7-3 in 11 games in which he skated more than 20 minutes, 9-1-1 in the 11 games he skated less than 20 minutes.  Odd Hughes family fact… the Brothers Hughes – Quinn and Jack, the latter taken first overall by New Jersey in last summer’s Entry Draft – are second and third among rookie skaters in giveaways, Quinn with 21 and Jack with 18.  Hughes has faced the Caps once, recording an assist in Vancouver’s 6-5 Gimmick loss to the Caps on October 25th.

Goaltender Jacob Markstrom has had a challenging year.  He lost his first two decisions but rallied to win his next two.  But then he was granted a leave of absence to tend to a family matter and was out of the lineup for eight days.  Upon returning, he went 3-0-1 in four appearances, but then the wheels got wobbly.  He dropped a pair of 2-1 overtime decisions, one to Anaheim and the other to St. Louis, and then he lost four straight decisions in regulation, stopping only 107 of 122 shots (.877 save percentage), that culminated in a six-goals-allowed outing against Dallas last Tuesday.  He rebounded with a 45-save effort in a 6-3 win over Nashville on Thursday.

Earlier this season, Markstrom became only the fifth goaltender in team history to appear in 200 games for the Canucks.  He is similarly ranked in wins, fifth with 82.  With a win in this game, should he get the call, Markstrom would even his win total with regulation losses with the Canucks at 83 apiece.  Markstrom is still looking for his first career win against the Caps.  He has a 0-7-1, 3.59, .887 record in eight career appearances against Washington. 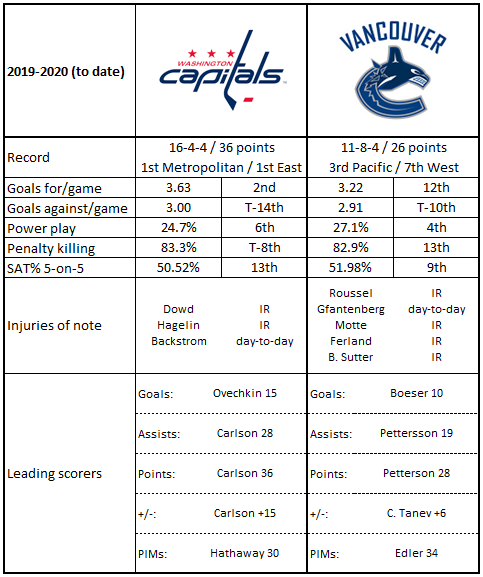 1.  The Vancouver Canucks have the best power play among current visiting teams against Washington since the Caps came into the league.  Vancouver has a 26.6 percent power play in the D.C. portion of the all-time series.  Three teams, either defunct or having moved to other cities, were better – Cleveland Barons (60.0 percent, but that was 3-for-5 in five games), Atlanta Flames (58.3 percent…ok, 7-for-12 in 12 games), and the Minnesota North Stars (29.1 percent).

3.  On the other side, only Calgary has taken more minor penalties on the road (64) than the Canucks (55, tied with the Capitals).

4.  Vancouver either doesn’t initiate or doesn’t get credit for doing so on the road.  Their 14.3 credited hits per road game are fewest in the league.

1.  In 49 games against the Canucks on home ice, the Caps have had 169 power play chances and were shorthanded 169 times.

2.  The vaunted Caps power play needs more vaunt on home ice.  Only seven teams have scored fewer power play goals at home than the Caps (seven).  It might be worth noting that the New York Islanders, that team with the 16-game points streak, is one of them (five).

3.  On the other side, only eight teams have allowed fewer power play goals on home ice than the Caps (five).

4.  The Caps are still looking for the first point posted by a rookie this season.  Granted, there haven’t been many opportunities.  Tyler Lewington (six games), Martin Fehervary (three games), and Beck Malenstyn (one game) have not had much lineup exposure.

Elias Pettersson is the flash, Brock Boeser is the home grown hero (Canucks’ first round draft pick in 2015). But there is Jonathan Tanner “J.T.” Miller, second on the team in goals (nine, tied with Pettersson, to Boeser’s 10).  With 22 points, he is one of three Canucks with more than 20 (Pettersson with 28 and Boeser with 22).  He is tied for third on the club in power play goals (four, with Petterson).  He is one of three players with a four-point game for the Canucks this season.  Yes, Pettersson and Boeser are the others.

Miller has been a good investment for the Canucks so far in this, his first season with the club after the club acquired him from Tampa Bay last June for Marek Mazanec, a 2019 third round draft pick, and a conditional 2020 first round pick (if the Canucks are in the 2020 draft lottery, the pick becomes a first rounder in 2021).  The nine goals and 13 assists he has posted in 23 games to date put him on a pace for what would be his first 30-goals season (a pace for 32 goals) and within shouting distance of 50 assists (46).  Both would be career highs; he had 23 goals and 35 assists split between New York and Tampa Bay in 2017-2018.  This is the 26-year old Miller’s third stop in eight NHL seasons after spending his first five-plus seasons with the New York Rangers and another season and change with the Lightning.  He is 3-6-9, minus-7, in 24 career games against the Caps.

T.J. Oshie is a study in competing forces – production and presence.  Through 24 games this season, Oshie has ten goals and is on a pace to post 34 goals, which would eclipse his career high of 33 posted with the Caps in 2016-2017.  He is also on a pace for 51 points, which would be his fourth year in five in Washington that he recorded at least 50 points.  That is the good news and where we now turn to the “don’t jinx it” portion of this section.  In his first four seasons with the Caps, Oshie missed 37 regular season games, most of them to a variety of injuries.  As Caps fans know by now, this is what comes with a player whose fearless and relentless style of play puts him in harm’s way and at risk to injury.

But there has been an odd feature to Oshie’s absences, at least in the regular season.  It might be an indicator of just how deep this team is that in his four-plus seasons with the Caps, the club is averaging 1.37 standings points earned per game when he is in the lineup.  In the 37 games he missed, they are averaging 1.43 standings points earned per game.  On the other hand, Oshie has posted a goal in 92 games as a Cap, and the team is 73-8-11 in those games.  Then there is that whole trick shot thing.  Since the league instituted their Gimmick in 2005-2006, 76 players have taken at least 50 shots in the freestyle competition.  Oshie has a better shooting percentage (52.4) than all but one (Erik Christensen: 52.7 percent).  Only Frans Nielsen has more game-deciding goals in the Gimmick (23) than Oshie (20).

Oshie is also, to put it in corny fashion, a “Kanuck Killer.”  For example, despite not having skated for the St. Louis Blues since 2014-2015, he remains tied for second among Blues still active in the league in points posted against Vancouver as a Blue (19, with David Backes).  His 0.90 points per game against Vancouver as a Blue is tops among active NHL players who played at least ten games against the Canucks while with St. Louis.  His scoring against the Canucks has not been as impressive as a Capital (3-2-5 in nine games with the Caps), but he is tied for fifth among current Capitals in scoring against Vancouver.  Overall, Oshie is 9-15-24, plus-3, in 30 career games against Vancouver.

The point we have made in the past about successful teams is not that they lose a game, they have an ability to keep “one” from becoming “two” or more.  The Caps have not lost consecutive games in regulation this season.  Since starting the season 2-1-2 and enduring three consecutive losses (two in overtime), they are 14-3-2 and have not lost consecutive games of any sort, regulation, extra time, or a combination of both.  But the Caps are a bit unsteady of late with a 3-2-1 record in their last six games, two of the wins coming in the Gimmick.  Perhaps some home cooking for a few games will set them back on the right path.