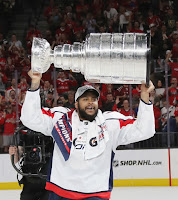 “Luck is not chance, it's toil; fortune's expensive smile is earned.”
-- Emily Dickinson

When the sun set on July 3, 2017, the third day of the 2017 free agent signing period, Ales Hemsky signed a one-year/$1 million contract with the Montreal Canadiens.  In Dallas, the Stars inked Alex Radulov to a five-year/$31.25 million deal.  Tucked away in the contract trackers was a one-year/$650,000 contract for Devante Smith-Pelly to play for the Washington Capitals.  Hemsky ended up starting the season on Montreal’s fourth line, played six games without recording a point, suffered a concussion in his seventh game, against the Anaheim Ducks, and did not dress again this season.  Radulov played in all 82 games for the Stars, recorded 27 goals and 72 points (both career highs), but his Stars failed to reach the postseason.

Smith-Pelly had an unremarkable regular season for the Capitals, posting seven goals and 16 points in 75 games.  The 75 games were a career high for “DSP,” but the offensive numbers were somewhat less than his career average per 82 games over his first six seasons with three clubs (Anaheim, Montreal, and New Jersey) – 10-14-24.  He averaged 12:21 in ice time, the median ice time in his seven NHL seasons.  Yes, “unremarkable” might be the adjective to describe his regular season, very much a “fourth line” sort of profile.

And nothing in his stretch run suggested he would be a particularly noteworthy player in the post season.  In his first six ten-game segments, he recorded at least one goal in four of them, and his point totals ranged from two to four points per segment.  What might have been an ominous signal for the postseason, he did not record a point after February 11th, going his last 24 games without one.  And, he had just one “plus” game in that span, going minus-9 overall in that span.

Still, his seven goals was exceeded only once in his career (he had 14 split between Montreal and New Jersey in 2015-2016), and his 16 points was the second highest he posted with one team in a season (he had 17 54 games with Anaheim in 2014-2015 before he was traded to Montreal).  In a way, he might have been precisely what the Caps might have bargained for when signing him to modest terms in July 2017. 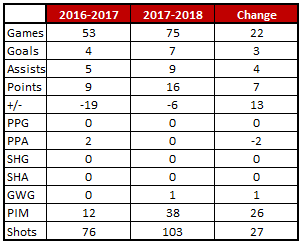 Cheerless’ Take… Sometimes, fourth liners provide an edgy kind of play that teams feed off of.  That was not the case, at least so far as DSP and those “grittership” numbers were concerned.  In 21 games in which he was credited with three or more hits, the Caps were 9-9-3.  They were 8-9-1 in games in which he had at least two blocked shots.  And the Caps were barely a .500 winning percentage team when he did not find his way to the score sheet (31-24-4).

Odd Smith-Pelly Fact… Devante Smith-Pelly and Tom Wilson were the only Capitals to average at least two hits per game and at least one shot on goal per game.

When the Tampa Bay Lightning visited Capital One Arena on the day after Thanksgiving, the Caps had not won consecutive games in regulation in three weeks and had not won consecutive games in regulation time on home ice all season to that point.  They were looking to end those skids against Tampa Bay after having dispatched the Ottawa Senators, 5-2, on Thanksgiving Eve at Capital One Arena.  It was a tall order, since the Lightning came to Washington winners of six of their previous seven games.

The teams exchanged first period goals, Vladislav Namestnikov opening the scoring for the Lightning on a power play and Alex Ovechkin tying the game late in the period.  Then, with the clock ticking down to the five-minute mark in the second period, Dmitry Orlov spied Smith-Pelly heading up the middle through the neutral zone and fed him the puck in stride.  As Smith-Pelly got to the Tampa blue line, he fed the puck to Jay Beagle, who fired a shot on goal.  Smith-Pelly tried to redirect the shot from in front of goalie Andrei Vasilevskiy, but the puck got through to the goaltender.  Vasilevskiy made the save with his left pad, but the puck came right to Smith-Pelly, who buried the rebound before Vasilevskiy could reset, and the Caps had a lead they would not relinquish.  Beagle added an empty net goal late, and the Caps had their second straight win in regulation on home ice for the first time this season.  Smith-Pelly got credit for the game-winning goal, his first and only one in the regular season.

The next time the Caps took home ice after that win against Tampa, things did not end as well for Smith-Pelly or the Caps.  Things started well enough for Washington when Evgeny Kuznetsov opened the scoring in the fifth minute of the contest.  Things quickly went sour, though.  The Kings tied the game mid-way through the first period, and after the Caps regained the lead early in the second period on another Kuznetsov goal, Los Angeles scored twice in nine seconds mid-way through the period to take the lead for good.  Smith-Pelly was on ice for both goals, as well as the first one the Kings scored.  It was more action, perhaps, than he might have wished for, given that he skated just 9:35 for the game that the Caps would go on to lose, 5-2.  His minus-3 was his worst of the season, and at the offensive end of the ice he was frustrated with all three of his shot attempts blocked.

Postseason… Some players have a sense of the moment and step up their game when it matters more.  Devante Smith-Pelly made two playoff appearances before this season and went 6-2-8 in 24 games, a 20-goal scoring pace per 82 games.  Not exactly what one might expect for a bottom six forward, even if five of those goals came in 12 games with the Anaheim Ducks in the 2014 postseason.  When he scored on his only shot in the Caps’ first postseason game this spring, it was in retrospect a good omen, even if the Caps lost that game to the Columbus Blue Jackets.

It would be the last time the Caps would lose a game in which DSP scored a goal in the postseason.  Six times he scored in a game, six times the Caps won.  Two of those goals were game-winning goals, one of them coming in the series clinching Game 6 win over the Blue Jackets, the other coming in Game 4 of the final against the Vegas Golden Knights that put the Caps on the brink of clinching their first Stanley Cup championship.  In addition to the two game-winning goals he scored, DSP scored another goal that gave the Caps a lead and two that tied contests, including his third-period goal in Game 5 against the Golden Knights in the final that set up the Lars Eller goal later that would clinch the Cup for the Caps.

Some players just rise to the occasion.  Nothing in his regular season numbers this season indicated that Devante Smith-Pelly would be a factor in the postseason, let alone a critical ingredient to the success the Caps enjoyed.  But there he was, inserting himself into many meaningful moments with an impeccable sense of timing that should not have been altogether surprising given his postseason history coming into this season.  It demonstrates that good fortune can be had for those who toil in relative obscurity, but whose hard work in those situations can prepare them for their moment in the spotlight.  Devante Smith-Pelly earned his good fortune.

Posted by The Peerless at 6:12 PM No comments: