The Peerless Prognosticator is ON THE AIR!!! -- Game 45: Capitals at Flyers, January 8th

The Washington Capitals head north on Wednesday night to visit the Philadelphia Flyers in a Metropolitan Matchup featuring teams that will be playing the back half of back-to-back games.  The Caps will head on the road one night after hosting the Ottawa Senators, while the Flyers return home to host the Caps after a visit to Carolina to face the Hurricanes. 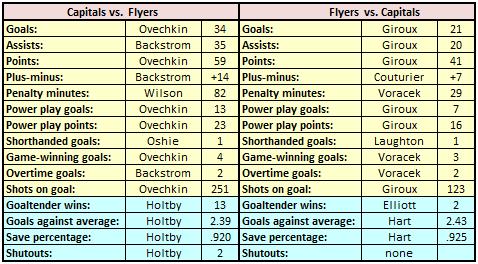 Most analysts reviewing the Matt Niskanen-for-Radko Gudas that sent Niskanen to Philadelphia thought the Caps might have gotten the better part of the deal, Gudas’ underlying numbers being better recently, and Niskanen’s performance last season perhaps signaling a decline.  However, while the jury remains out on who might have won that trade, Niskanen has contributed some pop from the blue line for the Flyers that was not there for the Caps last season.  His five goals is tied with Shayne Gostisbehere for second on the club among defensemen, and his 12 assists and 17 points place him alone in second behind Ivan Provorov.  Niskanen’s goals-assists-points per game (0.12-0.29-0.41) resemble more Niskanen’s production two years ago in Washington (0.10-0.32-0.43) than is does last year’s (0.10-0.21-0.31).  He has hit a bit of a dry spell lately.  After posting a two-point game against Buffalo on December 19th, Niskanen is 0-1-1, minus-6, in his last six games.  He is 1-5-6, plus-8, in 13 career games against Washington. 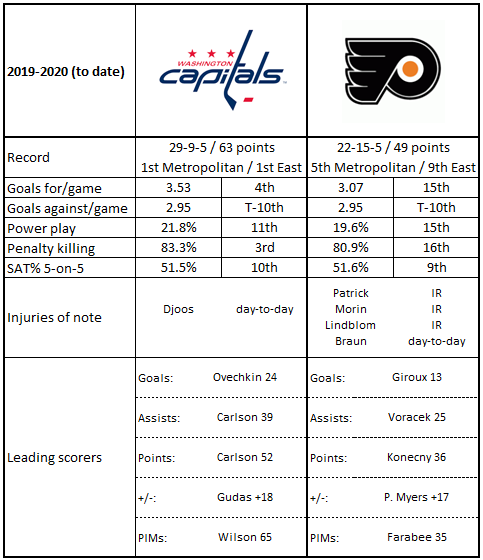 2.  Still on goalies… No Flyer netminder has ever posted more than one career shutout against the Caps while a Flyer.  Nine have done it once: Hextall, Dominic Roussel, Ilya Bryzgalov, Darren Jensen, Joh Vanbiesbrouck, Bernie Parent, Brian Buocher, Tommy Soderstrom, and Bob Froese.

3.  Hextall was the epitome of the “Broad Street Bully: Goalie Edition.”  In 44 career regular season games against the Caps, he had 44 penalty minutes.

4.  The Flyers have been successful at home this season in no small part to their scoring balance.  Eight different skaters have at least 12 points, but none of them have as many as 20 (Sean Couturier and Travis Konecny have 19).

5.  The defense has been especially valuable to the Flyers on home ice.  As a group, they have combined for 17 goals in 19 home games (seven on power plays), and none of the defensemen carry a minus rating.

1.  An illustration of how much turnover and how frequent it occurs in the NHL… The current roster of Caps skaters has a total of 79 goals against the Flyers as members of the Caps.  Of that total, 52 of them are shared by Alex Ovechkin (34) and Nicklas Backstrom (18).  No other Capital has more than five goals against the Flyers with the club (T.J. Oshie, Tom Wilson, and Dmitry Orlov).

2.  The Caps have scored multiple power play goals 22 times in Philadelphia.  They have not been especially successful in doing it, going 10-9-1 (two ties).

4. Keeping the Flyers from getting off quickly could be important.  Since 2005-2006, the Caps are 10-2-4 in 16 games in Philadelphia when blanking the Flyers in the first period.

5.  In 220 games between these teams and all the animosity and orneriness displayed over more than 40 years battling one another, only one player for either team has ever been assessed a match penalty.  The Caps’ Craig Berube was tagged with an intent-to-injure penalty in the waning moments of a 5-3 loss to the Flyers in Philadelphia on February 13, 1995.

There are names among the Flyers that Caps fans will instantly recognize – veteran Claude Giroux, former Cap Matt Niskanen, the latest Great Masked Hope in goal, Carter Hart.  But how many, when they hear the name “Travis Konecny,” think…”oh yeah, he’s a Flyer, too?”  But there he is, a 22-year old with his Flyer future spread out before him, but already in his fourth NHL season.  What he has become, in his young career to date, is a player of almost spooky consistency.  He followed up a solid rookie season (11-17-28 in 70 games) by going 24-23-47 in 81 games in his sophomore season, and they going 24-25-49 in 82 games last season.  In 39 games played this season he is 12-24-36 (team leader in points), his goal scoring on pace to finish with, yes, 24 goals once more.

Konecny has been potent on home ice thus far for the Flyers this season, his 8-11-19 scoring line matching that of Sean Couturier to tie for the team lead in goals and points on home ice for the orange and black.  As a player on whom the club depends for scoring punch, his contributions matter.  The Flayers are 11-1-0 on home ice in games in which he recorded at least one point, and they are 2-1-4 in those games he did not.  What he is also getting this season is more power play responsibility.  After averaging a little over a minute and a half per game in his first three seasons, he is averaging 2:47 per game on the power play so far this season.  Konecny is 2-0-2, minus-1, in 12 career games against the Caps.

It would be fair to say that the NHL party started for Nicklas Backstrom on the Wells Fargo Center ice sheet.  Backstrom was a rookie learning the ropes in the NHL in the fall of 2007, and he was putting together some decent numbers.  In his first 21 games he was 1-8-9, earning single points in nine games, and averaging a little under 16 minutes a game, but playing as much wing as center.  Then, the Caps made a coaching change at Thanksgiving, replacing Glen Hanlon with Bruce Boudreau.

The first game under the new coach was against the Flyers in Philadelphia.  It did not take long for Backstrom to show the new coach what he had in the rookie center.  Backstrom got the primary assist on a Mike Green power play goal in the third minute of the first period to open the scoring.  After Chris Clark gave the Caps a 2-0 lead early in the second period, the Caps struck again in the 15th minute, Donald Brashear getting the goal and Backstrom contributing the secondary assist to give him his first career multi-point game.  The Flyers came back, though, with three unanswered goals to tie the game late in regulation.  With just under two minutes gone in the overtime session, it was Backstrom who would end it with an assist from Alex Ovechkin, a pair that would define – and continue to define – Caps hockey for more than a decade.  For Backstrom, it was his first three-point game of a total that has reached 80 in his career, fifth-most among all players since he entered the league.  And starting with that rookie season, only one player in the league has scored more points against the Flyers in Philadelphia than the 33 posted by Backstrom.  Sidney Crosby has 34.  Backstrom is 18-35-53, plus-14, in 46 games overall in his career against the Flyers.

Do not let the Flyers’ recent sluggishness distract; there is no more formidable team in the league on home ice than the Flyers this season.  Even when they lose, they make it difficult.  Among their six losses at Wells Fargo Center, four were in extra time, and another was a two-goal loss that featured a late empty net power play goal in Arizona’s 3-1 win over the Flyers in early December.  It would not be a surprise to see these teams go once more to extra time to settle this one, but in the end, the result will be the same.

Posted by The Peerless at 3:52 PM No comments: