The Peerless Prognosticator is ON THE AIR!!! -- Game 3: Sharks at Capitals, October 14th

After a quick trip to Beantown to sample the chowder and whoop the Boston Bruins last Saturday, the Washington Capitals return to home ice on Tuesday to meet the San Jose Sharks at Verizon Center.

The Capitals return to the friendly confines with a 1-0-1 record, a modest start in the eyes of some, but it is their best two-game start since 2011-2012.  And while it is only a two game start, revel in the fact, Caps fans, that in the all-important “plus-minus” statistic (see: “what matters for some players and not others”), no Capital – not even Alex Ovechkin – is a minus player.  None, nada.

The same could be said of their opponent.  And on top of that, the Sharks have yet to allow a goal so far.  Two games, two shutouts.  There was one for Antti Niemi on 34 shots in a 4-0 over the Los Angeles Kings and one for Alex Stalock in a 30-save gem in a 3-0 win over the Winnipeg Jets.

Here is how the two teams compared in their final numbers from last season: 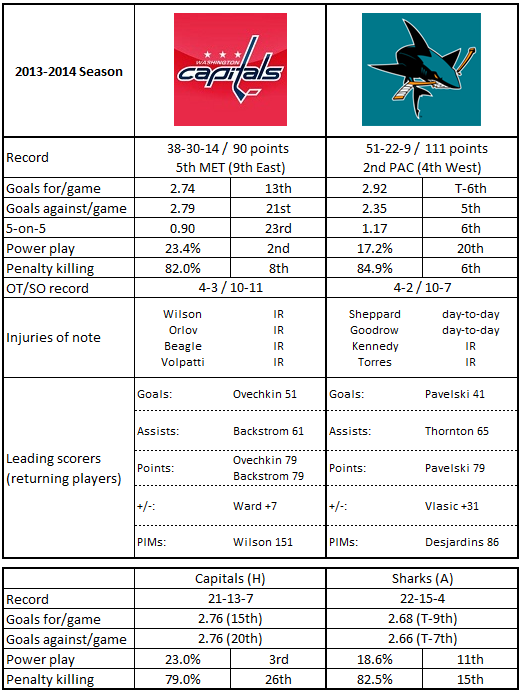 1.  It’s early, but San Jose has been putting it to teams early.  Of the seven goals they scored in two games, three have come in the first period, four in the second.  And in both games they scored goals before six minutes were gone, one against Los Angeles (5:43 into the game), two against Winnipeg (3:22, 5:12).

3.  No team allowed fewer power play goals than did the Sharks last season (33).  The trick was not to go shorthanded.  No team faced fewer shorthanded situations than did San Jose (219, 13 fewer than the New York Rangers).

5.  San Jose was a superior possession team last season, but they under-performed their possession metrics.  The Sharks finished fifth in Corsi percentage at 5-on-5 (53.53 percent) and third in Fenwick percentage (54.44 percent), but they were only eighth in team goal percentage (53.31 percent).

2.  More from the “it’s early” file… Andre Burakovsky and Evgeny Kuznetsov are among 18 rookies who have recorded points so far.  Only Columbus, with three rookies getting points (Michael Chaput, Alexander Wennberg, and Marko Dano) have more.

5.  Only six Capitals currently on the roster have scored goals against San Jose.  Alex Ovechkin has five of them; Nicklas Backstrom, Chris Brown, Eric Fehr, Dmitry Orlov (currently on injured reserve), and Joel Ward have one apiece.

He is 35 years old, was stripped of his captaincy last August and selected one of four alternate captains, has one point in two games so far, is averaging the second lowest amount of ice time in his career (17:02).  But it’s early.  Still, it seems a bit odd the way a guy on the first year of a three-year/$20.5 million contract would be used.  It is not as if his production was dropping off the table.  Over the past four seasons he has averaged 0.88, 0.94, 0.83, and 0.93 points per game.  His cumulative 0.90 points per game over those four seasons ranks 22nd among all players appearing in each of those four seasons and appearing in at least 150 games.  Is he being slowly eased out?  Against Washington he is 12-24-36 in 37 career games.

Mike Green has never scored a goal against the Sharks.  Okay, that’s only five games worth of career history.  Still, San Jose is one of only five teams, all in the Western Conference, against which Green has never scored a goal (Chicago, Dallas, Nashville, and Phoenix being the others).  He scored in his personal opener against Boston on Saturday, but he also had only two goals in his last 20 games to finish last season.  In that opener against Boston, Green was fifth among defensemen in even-strength ice time, third in power play ice time (he scored his goal), and fifth in shorthanded ice time.  It would be understandable if Green was brought along slowly after recuperating from an injury in pre-season that extended into the first week of the season.  With the Caps’ defensive depth, it will be interesting to see where Green falls on the depth chart in the weeks ahead.  He is 0-1-1 in five games against the Sharks.

The season opening string of tough opponents continues.  And while the Caps finally slayed the dragon that lurked in SAP Center for more than 20 years, denying the Caps a win since October 1993 until they won there last March, the Caps still have a grim home record against this team to address.  On win in ten games over more than 15 years is not the stuff to scare a visitor such as the Sharks.  But the Caps looked effective, if not efficient (based on possession numbers), in their shutout of Boston on Saturday.  The first goal the Caps score will be the first scored against San Jose this season, the Sharks being one of two teams remaining not having allowed a goal.  But San Jose has a formidable offense to go with that unblemished scoring defense.  The challenges have gotten progressively stiffer for the Caps to open the season.  Think of it as an opportunity to measure themselves against the best.