The Peerless Prognosticator is ON THE AIR!!! -- Game 61: Capitals at Maple Leafs, February 21st

After wrapping up their California trip with two wins sandwiched around a loss, the Washington Capitals work their way back east as they wrap up their six-game road trip with a pair of games against Atlantic Division opponents.  The first of those contests comes on Thursday night when the Caps face off against the Toronto Maple Leafs at Scotiabank Arena.  The Capitals can earn at least a split of the 12 available standings points on this trip with a win, but they will be facing the team with the best record among the three teams from the Eastern Conference they will have faced on this trip.

Toronto will be hosting the Caps after completing a six-game road trip of their own on which they went 3-2-1.  It will be nice for the Leafs to return home, where they have a four-game winning streak that started when they beat the Caps, 6-3, on January 23rd in what was both teams’ last game before the All-Star Game break.

The Maple Leafs are a high-scoring team, the second-highest scoring offense overall (3.53 goals per game) to the Tampa Bay Lightning (3.90).  However, that scoring offense on home ice is lower (3.41) than it is on the road (3.63).  John Tavares leads the team in home goals (14) and his 0.48 goals per game on home ice is second to Auston Matthews (0.50).  Tavares has had an interesting first season in Toronto after signing a seven-year/$77 million contract as a free agent last summer.  He started off like gangbusters on the road, scoring a hat trick in his first road game as a Leaf and going 11-7-18, plus-6, in his first 11 road games.  At home, it was a different story.  He did score a goal in his first game as a Leaf, an Opening Night win in Toronto against Montreal.  However, it was the only goal he scored in his first nine games at Scotiabank Arena.  It mattered.  While Tavares was going 1-4-5, minus-1, in those nine games, the Leafs were posting a 4-5-0 record.

With all the attention lavished on the shiny new object (Tavares) and the precocious young emerging stars (Matthews and  Mitch Marner, for example), a player like Nazem Kadri can get lost in the noise, even with the volume of pixels and column inches devoted to Maple Leaf hockey in Toronto.  However, Kadri is in or on the brink of breaking into the top-25 in franchise history in a number of categories:

However, he is behind his scoring pace of the past couple of years.  In each of the two seasons preceding this one, Kadri recorded 32 goals, his first NHL seasons with 30 or more goals.  With 15 goals in 59 games this season, he is on a pace to finish with 21.  On the other hand, his 20 assists in 59 games puts him on a pace to finish with 28, putting him in striking distance of his career high (30 in 2013-2014) if he has a season-ending rush in that category.  Kadri has had an interesting run of late on home ice.  In ten of his last 11 games at Scotiabank Arena, he has a total one point (an assist) and is a minus-5.  However, there is that 3-1-4, plus-5, game he had on January 23rd.  What is at issue is whether he will dress against Washington.  He was injured in the overtime loss to St. Louis on Tuesday, suspected of having sustained a concussion.  Against the Caps, Kadri is 7-7-14, even, in 22 career games.

Here is a tale of two goalies and the price paid for facing a lot of shots.  Consider Toronto’s Frederik Andersen and Vegas’ Marc-Andre Fleury.  In the 2019 portion of the schedule, they have face almost the same number of shots (427 for Andersen, 423 for Fleury), and they have almost identical goals against averages (2.75 for Andersen, 2076 for Fleury).  However, Andersen has posted his numbers in 719 minutes, while Fleury has done so in 892 minutes.  The difference is efficiency and the price paid for facing high shot volumes.  Andersen has faced 35.6 shots per 60 minutes, while Fleury has faced 28.4 shots per 60 minutes.  That is the difference between a .923 save percentage (Andersen, eighth-best among goalies with at least 500 minutes since January 1st) and a .903 save percentage (Fleury/23rd).  It is a good think Andersen has been playing as well, or at least as efficiently as he has been, or the Leafs would be in a world of hurt.  Andersen is 5-1-1, .916, 2.76, with two shutouts in seven career appearances against the Capitals. 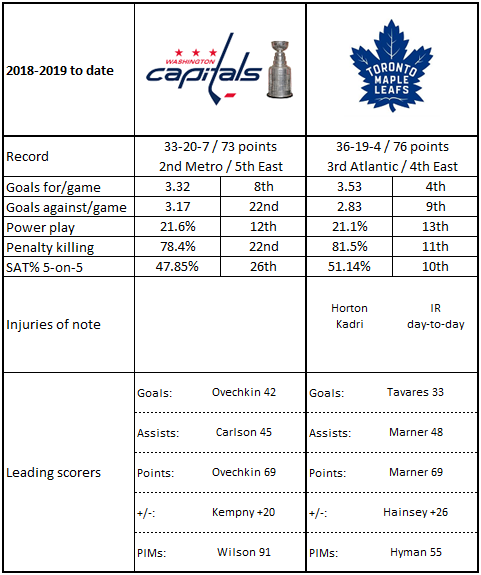 1.  For all of their considerable offensive firepower, the Leafs are one of only two teams in the league without a shorthanded goal on home ice this season (Florida is the other).

4.  Scotiabank Arena is like an amusement park in one respect.  The Maple Leafs are the only team in the league that is top-five in 5-on-5 shot attempts for (1581/3rd) and most shot-attempts against (1491/4th) on home ice.  It’s always a fun ride there.

5.  Toronto are capable of giving their fans a show.  Only Tampa Bay has recorded more games with five or more goals scored on home ice this season (10) than the Maple Leafs on home ice (5) among Eastern Conference teams.

2.  Alex Ovechkin leads the team in road points this season (33).  Who is second?  Backstrom??  Nope… Kuznetsov?? Nope… It’s John Carlson (27 points).  Only Brent Burns has more assists on the road this season among defensemen (33) than Carlson (22).

3.  Michal Kempny is a plus-14 on the road this season.  The other eight Caps defensemen to dress for road games are a combined  plus-1.

4.  If a Caps defenseman is going to get a goal on the road, maybe it is best to put one’s money on Matt Niskanen.  He is one of only 11 defensemen in the league to have recorded at least 40 shots on goal in road games with a shooting percentage over 10 percent (10.9).

5.  The Caps have 16 road wins this season.  That number is split right down the middle between goalies Braden Holtby and Pheonix Copley (eight wins apiece).

Jake Gardiner has always been the tantalizing talent; Morgan Rielly is the rising star.  Two defensemen who can put up points on a team that puts up points.  They fit right in.  However, there is room for old school in Toronto, too, and that is where Ron Hainsey steps in.  Hainsey is, in a way, Toronto’s version of Brooks Orpik, a defenseman of considerable experience who can serve as a steadying influence on his younger colleagues and play stay-at-home while his partners go off and jump into the play on offense.  It has worked well for the Leafs and Hainsey, who has the third-best plus-minus (plus-26) of any defenseman in the league through Tuesday’s games.  He, like Orpik, is in his 16th NHL season.  He, like Orpik, passed the 1,000 games played mark this season.  And he, like Orpik, is not really a big offensive contributor.  Hainsey has not scored more than five goals in an NHL season since 2008-2009 (six), but that was with Atlanta, three teams ago in his career.

And that is the biggest difference between Orpik and Hainsey.  Whereas Orpik compiled his 1,014 NHL games playing for two franchises – Pittsburgh and Washington – Hainsey compiled his 1,046 games to date for five franchises: Columbus, Atlanta, Montreal, Winnipeg, and now Toronto.  If there is a concession to his years, it is ice time.  The 19:56 he is averaging at the moment is the first time he has averaged less than 20 minutes a game since 2010-2011 (18:05 with Atlanta).  However, when he does log minutes, the Leafs are successful.  They are 26-4-1 in the 31 games win which he logged at least 20 minutes.  Hainsey is 1-5-6, minus-14, in 51 career games against the Caps.

There is one odd fact attached to Brooks Orpik this season worthy of mention.  In 505 career games played on the road in his career, he has six goals.  A third of them have come in 15 road games this season.  That isn’t even the especially odd fact.  What is, is that the Caps lost both games, in overtime to Pittsburgh in the first road game of the season and to Chicago in January.  It is only slightly less odd that when Orpik records a point at home, the Caps win (twice), and when he records one on the road, they lose (0-1-2).  More odd facts… Orpik obviously doesn’t post many points, but he does spread them around; he has at least one point against each of the four divisions this season (two against the Central)…he has points in each month in which he played more than one game (he had no points in one game in December).  But here is the oddest fact of all, or perhaps the most disturbing.  The Caps are 14-12-6 in games in which he dressed this season, 19-8-1 in games he was absent.  No single player makes that significant a difference on their own between wins and losses over the course of a season, but this is not a contrast the Caps want to be taking into the postseason, either.  Orpik is 0-9-9, minus-9, in 44 career games against Toronto.

It has been ten days since the Caps last skated on home ice.  This far into a road trip, one would think the charm of bonding or the odd team trip/activity would lose its charm (well, not a visit to the Hockey Hall of Fame for a ceremony).  But this is, as they say, a “benchmark” game, a contest pitting a team on the back half of a difficult road trip facing a club they might face in the postseason that can be thought of as being on a short list of contenders to advance to the Stanley Cup final.  The Caps have to fight through some unevenness in their game on this trip.  They have shown firepower (five goals against San Jose) but have been quiet, too (shutout by Columbus).  They displayed suffocating defense (against San Jose and, to a lesser extent, Los Angeles) but were torched by a team that couldn’t shoot a puck into ocean from the beach (Anaheim).  If the Caps do not bring their “A” game against Toronto, the grade they’ll likely wind up with is “F.”