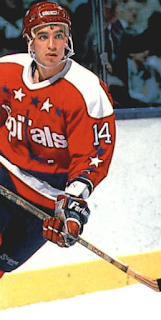 Next in our “what if today didn’t happen the way it happened back then?” series, we wonder about July 13, 1990.  Doesn’t ring a bell, does it?  The Washington Capitals were coming off their deepest playoff run ever, a trip to the Prince of Wales Conference finals.  They were smoked by the Boston Bruins in that series, four games to none, but it was still quite a ride, a year in which the Caps dressed 37 skaters and five (yes, five) goaltenders in the regular season and a year in which the phrase “Druce on the Loose” would become part of the Capitals’ history.

That playoff run led, at least indirectly, to an incident that took place before July 13, 1990, one that we would have to think could not have happened for the July 13th event not to take place.  That incident occurred on the evening of May 11th and the early morning of May 12th.  In it, four Capitals allegedly engaged in sexual misconduct with a minor (a grand jury later chose not to indict any of the four players).

Of the four players allegedly involved in the incident – Dino Ciccarelli, Scott Stevens, Geoff Courtnall, and Neil Sheehy – only Ciccarelli ever played for the Capitals again (he would be traded two years later), but the player who is the subject of this “what if” is Courtnall.  He was traded on July 13, 1990 (said to be at the player's request) to the St. Louis Blues for forward Peter Zezel and defenseman Mike Lalor.  Courtnall was coming off a 35-goal season after posting 42 goals with the Caps in 1988-1989.  He would go on to record a fourth straight 30-plus goal season in 1990-1991 with the Blues and the Vancouver Canucks, to whom he was traded late in the season.

To ask “what if Courtnall had not been traded” is really to ask the question, “what if that incident in Georgetown never took place,” thus sparing the Caps from making deals in its aftermath?  Keep in mind, none of the four players involved had reached age 30 in the 1989-1990 season.  Ciccarelli and Sheehy were 29, Courtnall was 27, and Stevens was 25.  You could say that if these four had stayed around, the Caps might have built something special off their 1990 run to the conference final.

There are two flaws in that thinking, though.  First, there was the matter of Stevens, whose contract was up at the end of the 1989-1990 season, making him a restricted free agent.  He would be tendered an offer sheet by the St. Louis Blues, and as any Caps fan knows, the team did not match the offer to retain his services.  In exchange, the Capitals received five draft picks as compensation (note that the trade alluded to in the linked article that would be announced later would be the Courtnall trade that is the subject of this look back).  There is no reason to think that this part of the timeline would have been altered had the events of the previous May not happened; Stevens would still go to St. Louis, and the Caps would still get those five draft picks.

But what if Courtnall and the others stayed?  If you subscribe to the notion that the Stevens signing made him the most effective draft pick in team history for what his departure begat (I would subscribe to that notion), keeping an offensive contributor such as Courtnall could only have helped.  But one should not get too far in front on this idea, either.  Keep in mind that the Capitals team that went to the conference finals in 1990 finished the regular season with a record of 36-38-6, third in the Patrick Division.  They did close the regular season with a bit of a rush, going 8-4-2 in their last 14 games to give themselves some momentum heading into the playoffs.  However, this was not a dominant team by any stretch of the imagination.  If ever there was a team of whom in could be said, “just get in, and anything can happen,” the 1990 Caps were that team.

In 1990-1991, even with the Caps retaining the services of Courtnall and Sheehy, in addition to Ciccarelli, the team was embarking on something of a youth movement.  The Caps dressed 13 rookies that season in real time for a total of 228 man-games.  Three – Mikhail Tatarinov (65), Peter Bondra (54), and Dmitri Khristich (40) – appeared in 40 or more games.  Even with Courtnall and Sheehy staying, it is hard to think that the rookie imprint on the season would have been a lot different, although one can entertain the idea that perhaps Bondra would not have had quite the exposure he had that season.

And this brings us to the second flaw in thinking something special might have happened.  As it was, the 1990-1991 team without Courtnall or Sheehy was not a lot different from the previous year’s version, going 37-36-7 and once more finishing third in the Patrick Division.  Would Courtnall’s offense have made a difference?  Yes, but perhaps only on the margins in the regular season.  The Caps might have made up the four points they finished behind the New York Rangers for second place in the division, but they still would have faced the Rangers in the first round of the postseason, a team they beat four games to two in real time.

This, however, is where things get intriguing.  In the second round, the Caps did (and likely would in this scenario) face the Pittsburgh Penguins in what was the first-ever postseason meeting of these clubs.  Washington finished just seven points behind the Penguins in the regular season, although they did struggle with them (a 2-4-1 record in seven games).  Having taken Game 1 of their second round series against the Pens, 4-2 in Pittsburgh, the Caps were in a position to grab a two-game lead on the road in Game 2.  Game 2 was a back and forth affair.  Washington scored first on a Dale Hunter goal, but the Pens scored three straight to take a 3-1 lead.  The teams then exchanged goals twice, the Pens taking a 5-3 lead.  A pair of goals by Ciccarelli tied the game, and then Calle Johansson gave the Caps the lead mid-way through the third period.  With less than five minutes in regulation, Randy Gilhen tied the game for Pittsburgh, sending the contest into overtime.  There, Kevin Stevens scored eight minutes in to give the Penguins the win and salvaging a split of the two games in Pittsburgh.  The Penguins went on to win Games 3-5 (the Caps managing single goals in each of the games) to take the series on their way to their first Stanley Cup.

So, one wonders, if Courtnall had been a Capital in the 1991 postseason, and he managed to make his own goal-scoring contribution in Game 2 to help push the Caps to a win and a 2-0 lead in games heading back to Washington, does the arc of that series change in the Caps’ favor?  And even if the Caps did not go as far as the Penguins did in the postseason in 1991, does a whole unfortunate volume of Capitals history that spans decades – up to and including this past spring – of always falling at the hands of the Pittsburgh Penguins in the playoffs never get written?

That is what we wonder about when we think about Geoff Courtnall not being traded on July 13, 1990.