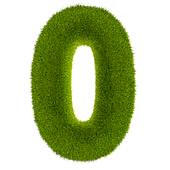 The Washington Capitals took the ice looking to sweep a back-to-back set of weekend games, but they fell behind early, spent too much time in the penalty box, and didn’t have enough late in a 4-1 loss to the Florida Panthers.

It took the Panthers just 84 seconds to open the scoring when Christian Djoos gave up the puck behind the Capitals’ net, Jamie McCann picking it up for the Cats and feeding Connor Brickley for a point blank shot that beat goalie Philipp Grubauer.  It was all the scoring until the last minute when the Panthers doubled their lead, the goal coming on a power play.  Vincent Trocheck carried the puck down the right wing wall into the Caps’ zone.  From the edge of the right wing circle he fed Jonathan Huberdeau in the middle, and Huberdeau fed the puck to Evgenii Dadonov steaming down the middle.  Dadonov had room to take a couple of strides, get a better shooting angle, and ripped a shot past Grubauer to make it 2-0 going to the first intermission

Penalties killed the Caps in the first dozen minutes of the first period.  They took four penalties in the first 12:20, the middle two giving the Panthers a 5-on-3 advantage for 1:45.  Florida scored on the two-man advantage when Vincent Trocheck one-timed feed from Aleksander Barkov over Grubauer’s left shoulder, and it was 3-0, 8:58 into the period.

The Caps got one back late in the period when Chritian Djoos walked the puck across the high slot, found a space in the Panther defense, and ripped a shot over goalie James Reimer’s left shoulder just under the crossbar to make it 3-1 at the 15:23 mark.  The goal seemed to give the Caps a spark, but they could not solve Reimer for a second goal before intermission.

The Caps had their chances late in the period, Evgeny Kunetsov and Brett Connolly both having good looks from deep to Reimer’s left, but both were turned away.  Then, with the Caps having pulled Philipp Grubauer for an extra skater, they drew a penalty on Ian McCoshen with 1:51 left in regiulation.  But with the Caps with a 6-4 man advantage, Barkov scooped up a loose puck in the high slot and backhanded it the length of the ice into the empty net for the final 4-1 margin.

-- Andre Burakovsky had a golden chance late in the second period to get the Caps within a goal when a rebound trickled off the left pad of James Reimer and slid to Burakovsky.  The puck got caught up in Burakovsky’s skates, leaving Burakovsky with only an attempt to backhand the puck back between his skates to the empty side of the net with Reimer down, but Burakovsky could not get his stick on the puck, and it was cleared out of danger.

-- Nicklas Backstrom had five shots on goal over the first 40 minutes, at that point already being his high in shots on goal for any game this season.  He finished with six shots on goal.

-- Every Capital skater but Brooks Orpik recorded a shot on goal.  John Carlson led the team with seven.  He also led the club with 11 shot attempts.

-- The Caps did not lose consecutive games on home ice all of last season.  This game was their third straight loss on Capital One Arena ice.  Change the name back.

-- Philipp Grubauer’s record dropped to 0-2-1, but it is not as if he’s had a lot of support.  The Caps have a total of six goals in front of him in three games, half of them coming in his 4-3 overtime loss to the Tampa Bay Lightning.

Again, it seems if the top six forwards aren’t scoring, the Caps aren’t winning.  And the well-worn route to the penalty box made the task just that much more difficult.  The Caps have a lot to work on and six days to do it before they visit the Vancouver Canucks on Thursday night.  They had better spend their time well.  This is a team spinning its wheels at the moment.

Posted by The Peerless at 10:53 PM No comments:

The Peerless Prognosticator is ON THE AIR!!! -- Game 9: Panthers at Capitals, October 21st

Fresh off their 4-3 overtime win over the Detroit Red Wings on Friday night, the Washington Capitals return to the friendly confines of Capital One Arena on Saturday night to host the Florida Panthers.

The Panthers are coming off a Friday night match-up of their own, losing 4-3 at home against the Pittsburgh Penguins. It brought Florida’s record to 2-4-0. Against the Capitals they will be looking for their first road win after dropping decisions in visits to the Tampa Bay Lightning, Penguins, and the Philadelphia Flyers.

Florida has had some trouble keeping pucks out of their own net in the early going. After they allowed 20 goals in their first five games (4.00 per game) before last night, they allowed anotherfour to the Penguins.

Defenseman Aaron Ekblad is another top-three pick on the Panther roster, the first overall pick of the 2014 draft.  He has had little trouble living up to his top-pick billing so far.  In each of this first three seasons he recorded ten or more goals from the blue line, although he hit the ten goal mark last season despite missing 14 games to concussion and neck injuries.  As it is, Ekblad tops his 2014 draft class in games played (233), goals among defensemen (39), and points among defensemen (101).  He is already 2-3-5 in six games this season for the Panthers.  In eight career games against the Caps, he is 1-1-2, even. 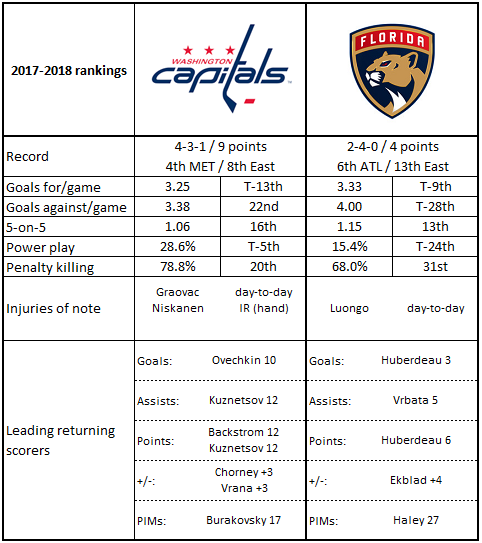 1.  Through Thursday’s games, Florida was recording a whopping 41.8 shots on goal per game, although their plus-8.8 shot differential was just second to the Edmonton Oilers (plus-11.5). Not that all those shots matter; Florida is 1-3-0 when outshooting their opponent.

2.  One the one hand, the Panthers have scoring balance; eight players had four or more points through Thursday’s games. On the other hand, they have three players with five points (Evgenii Dadonov, Nick Bjugstad, and Jonathan Huberdeau), tied for 86th in the league. They seem to lack a go-to scorer.

3.  Only four teams had more penalty minutes per game than Florida (14:35) going into Friday’s games, but the Panthers actually had a positive differential in special teams ice time (plus-8:45, seventh-best in the league).

4.  Watch the first period carefully. Through Thursday’s games, the Panthers scored one goal in first periods in five games, lowest first period goal total in the league. Not that they give up a lot; their four goals allowed is stingier than all but four teams.

1.  When the Caps out-shot the Detroit Red Wings, 41-37, in their overtime win on Friday night, it was just the second time in eight games that the Caps outshot an opponent.  They out-shot the New Jersey Devils in a 5-2 win on October 13th.

2.  The Caps should outshoot opponents more often.  They are one of eight teams that have not yet last when doing so.  The thing is, though, only the Los Angeles Kings in that group has outshot teams more than twice (the Caps have done so twice).

4.  The Caps have the third-worst shot attempts-for percentage in the league when ahead in games (39.18), ahead of only Ottawa and the New York Rangers.

5.  The Caps have some work to do for their top three of Evgeny Kuznetsov, Alex Ovechkin, and Nicklas Backstrom to regain the top spots in league scoring that they held before Friday’s games.  Tampa Bay’s Steven Stamkos and Nikita Kucherov now hold the top two spots, with Kuznetsov and Backstrom tied for third.

Drafted in the seventh round by the Colorado Avalanche in 1999, spending parts of two seasons with the Avs, then off to Carolina, back to Chicago, out to Phoenix, over to Tampa Bay, back to Phoenix, up to Vancouver, back lone more time to Phoenix (by this time “Arizona”), and now in Florida. Radim Vrbata has put on more miles over 16 seasons, it seems, than some Apollo moon missions. He has quietly assembled an interesting body of work, ranking 11th in games played among active players (1,020; more than Eric Staal or Henrik Zetterberg), tied for 21st in goals (279, with Patrick Sharp), 30th in points (ahead of Claude Giroux and Chris Kunitz), and eighth in shots on goal (3,031; ahead of Joe Thornton and Jeff Carter). Vrbata has yet to score a goal for the Panthers, but with four assists he is in that large clot of players that comprise the team’s leading overall scorers. Vrabata, who at 36 is the second-oldest skater on the team (Derek MacKenzie is two days older), is coming off one of his best years with a 20—35-55 scoring line with the Coyotes last season, and he is 7-5-12, minus-6, in 20 career games against the Caps.

Last season, his first with the Caps, Brett Connolly started slowly, scoring one goal in his first 11 games before finishing the season with a career high 15 goals in 66 games.  This season, he is starting slowly again with one goal in eight games, that goal coming on Opening Night in the Caps’ 5-4 Gimmick win over the Ottawa Senators.  When he recorded a shot on goal against the Detroit Red Wings on Friday night, he broke a three-game streak without a shot on goal.  Only once this season does Connolly have more than one shot on goal, that in the Caps’ 4-3 overtime loss to the Tampa Bay Lightning on October 9th.  It follows a similar patter to last season when Connolly recorded only four shots over an eight-game stretch before breaking out with a goal and an assist with four shots in a 3-1 win over Buffalo in late November.  In 13 career games against Florida, Connolly is 0-3-3, minus-3.

This is the second straight weekend that the Caps are playing back-to-back games.  The second half of last weekend’s set did not go well, losing to the Philadelphia Flyers, 8-2.  It was, however, the Caps’ third game in four nights.  They do not have that problem in this game, the team getting two full days off after their loss to Toronto on Tuesday before beating the Red Wings on Friday.  And, they are at home for this contest.

Posted by The Peerless at 10:13 AM No comments: