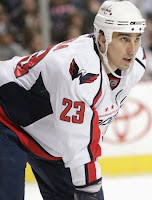 It’s September, and we’re in the home stretch to the start of the season. And with that, it’s time to start taking a look at what’s ahead. In other words, it’s time to start prognosticating, and we’ll be looking at the team that’s likely to take the ice this year. We’d like to say we’ll look at a player a day up until opening night, but we can’t promise. But we will have help. The cousins – Fearless and Cheerless – will be offering up their takes on each player, which means we’ll probably have to referee this mess as they get into their infernal disagreements. But here, to start our review, we’re going to look at defensemen, starting with…
Milan Jurcina
Last year: 78 games, 1-8-9, +4. 30 PIMs, 151 hits
Career average (per-82 games): 5-9-14, +3, 54 PIMs
Fearless’ take: Jurcina came to the Caps from Boston in the 2007-2007 season and made an impression as a guy who will hit and take the body. At times last year, he gave the impression of getting away from that, but he was still second on the team in hits, first among defensemen. What’s more, he had almost 50 percent more hits last year than the year before (151 to 103) in only five more games played. Consistency is perhaps the biggest concern with his game, but the flip side of that coin is that he still hasn’t yet played 200 games in the NHL. He improved on that in the later stages of the season; he was +11 in his last 22 games.
Cheerless’ take: For a guy with such a heavy shot, he should have more goals. His goal totals have gone down over his four seasons (6-2-2-1). He had a goal in the home opener last season, and not another one for the rest of the season, although he tied a career high in assists. However, he scored as many points as John Erskine, for heaven’s sake, and Erskine played in 24 fewer games. He didn’t have a point in his last 14 games. In the last dozen games, when the Caps were going 11-1, he was only plus-1. And, even though he averaged 16:38 of ice time for the season, he was down to an average of 14 minutes for those last dozen games. He struggled in division games (1-0-1, -4, in 28 games), and maybe he should be held out of day games…he was 0-0-0, -7 in 10 matinees.
Feerless…”You made up that last stat, didn’t you?”
Cheerless…”Just callin’ ‘em like I see ‘em, cuz…”
The Peerless’ take: Jurcina’s second half (0-6-6, +8, in 39 games) was better than his first half (1-2-3, -4, in 36 games) last year. He turned 25 in June, and with that, one should expect to see more consistency of effort and judgment in his game. He is a physical player, although not a pugilist (he has no career NHL regular season bouts). When he’s on the ice he has to make his presence felt when he is out there by laying the lumber on opponents, much like his introduction to the Caps in 2006-2007 when it seemed that every night he was smearing someone along the boards. Generally, he seems to have pretty good judgment as to when to make that hit. If the Caps are a contender, he is probably a third pair defenseman (with the Green/Morrison and Poti/Schultz ahead of him), getting 16-18 minutes or so a night. More offense would be a plus, but his contribution will be in opponents having their head on a swivel, wondering when Jurcina is going to drop the hammer.
Projected: 3-10-13, +6, 48 PIMs
Posted by The Peerless at 2:33 PM 5 comments: