The Peerless Prognosticator is ON THE AIR!!! -- Game 14: Penguins at Capitals, November 7th

Wednesday night used to be “Rivalry Night” in the NHL, at least in the world of NBC Sports, but is now just “Wednesday Night Hockey.” For this Wednesday, though, don’t believe it.  It’s Rivalry Night, alright.  The Washington Capitals host the Pittsburgh Penguins in a contest pitting teams with identical records against one another in what will be the 54th regular season meeting in the Alex Ovechkin/Sidney Crosby era.

The Caps will be looking to win consecutive games for the first time this season and boost their regular season record against the Pens in the Ovechkin/Crosby era to 24-21-9.  It has been a bit of a struggle on home ice for the Caps who, after defeating the Edmonton Oilers by a 4-2 margin on Monday night, are 4-1-2 at Capital One Arena.  They face a bold challenge from the Penguins, who are one of only three teams remaining that have not lost a game in regulation time on the road (4-0-2, trailing Nashville and Toronto, both at 6-0-0 after Monday’s games).

For more than a decade, the Penguins have been a forward-dominated, center-centric team featuring the offensive contributions of Sidney Crosby and Evgeni Malkin, and those two have been the top goal scorers and point producers over the last three-plus seasons.  But over that same time, Phil Kessel has held his own as a primary contributor on the offensive side of the ledger.  In his three-plus seasons as a Penguin, Kessel is third in goals (90), trailing only Crosby (115) and Malkin (109), and third in points (237), trailing Crosby (277) and Malkin (248).  Over that period, no other Penguin is within 50 goals or 70 points of Kessel.  Pittsburgh’s “Big Two” is as much a “Top Three.”   Kessel has not let up this season, getting off to a hot start.  His 7-9-16, plus-2 start through 13 games, a shade ahead of last year’s start (4-9-13, minus-1).  Kessel is also among the most durable players in the league.  Coming into this season he appeared in every scheduled regular season game for eight straight seasons and has not missed a regular season game since October 31, 2009, when he was skating in his second season with the Toronto Maple Leafs.  Kessel is 11-21-32, minus-7, in 44 career games against the Capitals.

No one should be surprised that Kris Letang leads the defensemen in scoring for the Pens (4-8-12, plus-6, in 12 games).  Since his 2007-2008 rookie season he is tied for seventh place in points per game by defensemen (0.65).  The surprise so far is that Jamie Oleksiak is tied with Letang for the team lead in goals by defensemen (four) and is second in points (eight).  Part of the surprise is that he is more reminiscent of those massive defensemen who thrived in the late 1990’s and early 2000’s, at 255 pounds being heavier than every defenseman in the league except Winnipeg’s Dustin Byfuglien.  The other is that he has not been a regular fixture in any lineup since he made his debut with the Dallas Stars in 2012-2013.  Last season, one he split between Dallas and Pittsburgh (the Stars traded him in December 2017 for a fourth-round draft pick), was the first in which he dressed for more than half a season’s worth of regular season games (68).  In doing so he set a tied a career high in goals (five) and set a personal best in points (17), both numbers he is within range of surpassing.  Oleksiak is 1-0-1, plus-1, in six career games against Washington.

When Marc-Andre Fleury took his leave of Pittsburgh before last season to tend goal for the Vegas Golden Knights, the plan was a seamless transition to Matt Murray, who in his first two seasons was 41-12-5, 2.32, .925, with five shutouts in the regular season and two Stanley Cups on his resume.  Well, you know what the poet Robert Burns said about plans.  Having been given the top goaltending responsibilities, Murray has been an injury-plagued (lower body, concussion), disappointing performer in a season and change (31-20-4, 3.07, .903, with two shutouts).  He also had to deal with the passing of his father, no doubt an influence on his performance.  It has not been an easy time for Murray, who is only in his fourth NHL season and is not yet 25 years old.  He started this season giving mixed signals that his troubles were behind him.  He opened the season with a 4-1-0 record in his first five appearances, but his goals against average (3.37) and save percentage (.910) were not as impressive.  It has only gotten worse.  Murray is 0-3-1 in his last four decisions, while his goals against average ballooned to 4.65, and his save percentage dropped to .839 in those games.  His 3.87 goals against average overall ranks 38th of 42 goalies with at least 250 minutes of ice time, while his save percentage of .886 ranks 35th in that group.  Murray is 5-4-0, 3.93, .875 in nine career appearances against the Caps. 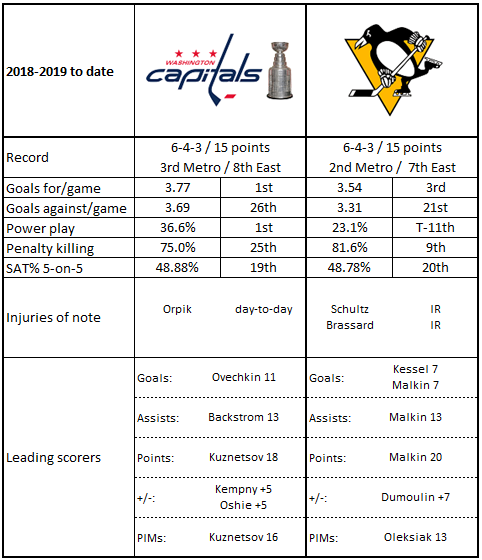 1.  Letang and Oleksiak have those four goals apiece.  The other six defensemen for the Pens have one goal among them (Jack Johnson).

3.  Pittsburgh allows more shots on goal than one would expect a successful team to allow.  Their 34.1 shots allowed per game is fifth-most in the league, an average topped only by Detroit (34.6), the New York Rangers (34.9), Anaheim Ducks (37.0), and Ottawa Senators (39.1).  Early in the season as it is, none of those teams are among the current playoff eligibles.

2.  Evgeny Kuznetsov, Nicklas Backstrom, and John Carlson have 36 assists among them.  Of that total, 19 have come on power plays.

3.  The Caps have had pretty good starts this season.  The good news is that they have only trailed four times in 13 games at the first intermission.  The bad news… they are 0-2-2 in those games.

5.  Evgeny Kuznetsov has six power play goals.  His next one ties a career high, set last season in 79 games.

For more than three decades, the Penguins have been a team defined by its stars – Mario Lemieux, Jaromir Jagr, Sidney Crosby, Evgeni Malkin.  Their success, however, has been more the product of the down-roster players making contributions, players like Bob Errey, Troy Loney, and Phil Bourque in the Lemieux Stanley Cup years, and players like Chris Kunitz, Matt Cullen, and Nick Bonino in the Crosby Cup-winning years.  Which brings us to Dominik Simon.  The 2015 fifth round draft pick from the Czech Republic has had perhaps a more rapid rise to the parent club than most fifth-round picks.  Simon spent two years with Wilkes-Barre/Scranton in the AHL (and five games with the big club) before he got a longer look last year in Pittsburgh (33 games).  This year, he has been an important contributor in the early going, a scoring line of 3-5-8 (fifth among Penguin forwards in points), plus-5, in 13 games.  He had a five-game points streak stopped in a 5-0 shutout at the hands of the Toronto Maple Leafs on Saturday and comes into this game without a point in two straight contests.  He has not gone three straight games without a point so far this season.  Simon has one assist and is minus-2 in two career games against the Caps.

If Nicklas Backstrom is the Washington Capital who has flown under the NHL radar for most of his career, Brett Connolly might be the Cap skater who does so among his own fan base.  Since arriving in Washington in the 2016-2017 season, his 32 goals are sixth-highest on the team, as are his 27 even strength goals.  His 0.21 goals per game is fifth-highest among current Capitals over that two-plus season span.  If he records a point against the Pens, he will become the sixth Capital to reach double digits (unless Lars Eller has two before Connolly gets that point).  He started this season without a goal in his first six games, but he has two in his last seven.  That he has two goals in 13 games is not necessarily cause for alarm.  Connolly had two goals through the Caps’ first 13 games last season (actually, two through his first 17 contests) and two through his first 13 games the previous season (a streak that became two in 15).  He had 15 goals in each of his two seasons with the Caps coming into this year, so he would seem a decent bet to approach that number this time around.  Connolly is 3-2-5, minus-1, in 18 career games against Pittsburgh.

If there is a new wrinkle in this series, it is in how different the games in Pittsburgh and Washington have played out recently.  In the last four games in Pittsburgh, the teams combined for 43 goals, the Pens holding a 23-20 edge.  In Washington, the last four games were played to a total of 27 goals, the Caps having an 18-7 edge.  It argues for a more close-to-the-vest sort of game on Wednesday, although in this context, that is a relative thing.  The fault line on this game might rest on the Capitals having a top notch scoring offense and power play, while the Pens have allowed five or more goals in three of their last four contests.

Capitals 5 – Penguins 3
Posted by The Peerless at 5:00 PM No comments: