The Peerless Prognosticator is ON THE AIR!!! -- Game 48: Devils at Capitals, January 16th

Winter is the season of reruns on television (you kids who only do streaming might not understand), and so it is with hockey in January.  The Washington Capitals, who in the space of 20 games will have faced the Columbus Blue Jackets three times, the Carolina Hurricanes three times, the Tampa Bay Lightning twice, the San Jose Sharks twice, and the Boston Bruins twice, will face the New Jersey Devils for the third time in that span on Thursday night at Capital One Arena, making it 15 games among six teams over that 20-game span that the Caps faced more than once. 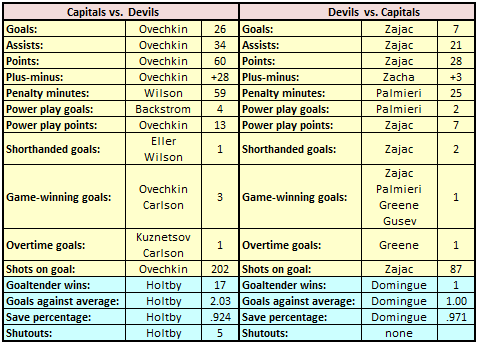 If there is a power forward who compares to the Capitals’ Tom Wilson, one might look to the career arc of Devils forward Wayne Simmonds.  A player who would earn a reputation as a tough-as-nails, heart-and-soul player, Simmonds combined an improving scoring touch with an ornery nature over his first nine seasons with the Los Angeles Kings and Philadelphia Flyers.  In those nine seasons he posted 202 goals and 901 penalty minutes in 687 games, topping 25 goals in a season five times and 100 penalty minutes five times.  But the wear and tear of his style of play was taking a toll, and in 2017-2018, his tenth season, it became a burden that he toughed out to miss just seven games.

It did affect his production with the Flyers, though, his goal total dropping from 31 in 2016-2017 to 24 and his point total dropping from 54 to 46.  The following season, he became a trading deadline asset and was sent to the Nashville Predators for forward Ryan Hartman and a conditional fourth round pick in 2020 Entry Draft. Simmonds’ stay in Nashville did not go well.  He had a goal and a pair of assists in 17 games to close the regular season and dressed for only two postseason games, going without a point in less than 15 total minutes of ice time.  He signed a one-year/$5 million contract with the Devils last summer, and while he has been more productive than he was with Nashville, his numbers are far off his early career production (4-14-18, minus-12, in 46 games).  When he takes the ice against the Caps on Thursday, it will be two months to the day since his last goal (November 16th in a 4-3 overtime win over Montreal).  In 27 games since, Simmonds is 0-9-9, minus-5.  Odd Simmonds fact… the Devils are 1-7-3 in the 11 games he skated 16:38 or more this season.  He is 9-11-20, plus-1, in 35 career games against the Caps.

Forward Blake Coleman is an example of the simple benefits of putting one foot in front of the other.  He was a third round pick (75th overall) by the Devils in the 2011 Entry Draft and spent his next four years skating for the Miami University RedHawks in the NCAA.  From there it was 66 games over two seasons with the Albany Devils in the AHL, the second season of which was split with the parent club in New Jersey.  In four seasons with the Devils, Coleman’s goal scoring has improved from one in 23 games in 2016-2017 to 13 two years ago to 22 last season; and with 18 goals in 46 games this season he is on pace to set another career high (32).  Coleman has been a remarkably consistent performer between home and road in his career.  He has 27 goals in 114 career home games, 27 goals in 112 career road games.  He has 17 assists at home, 18 on the road.  He has 263 shots on home ice, 265 on the road.  He shoots 10.3 percent at home, 10.2 percent on the road.  He has four shorthanded goals in home games, four on the road.

What distinguishes Coleman’s game this year is scoring in multiples.  He has more multi-goal games (four) than the rest of the Devils squad combined (three).  He started the season with a multi-goal game, two goals in a 5-4 Gimmick loss in the Devils’ season opener, and he has a multiple goal effort in his last game, a hat trick in a 7-4 loss to the Toronto Maple Leafs.  The hat trick against the Leafs extended a productive run for Coleman, who has nine goals in his last 13 games, including one in each of his two meetings against the Caps in that span.  Coleman is 3-1-4, minus-1, in ten career games against Washington. 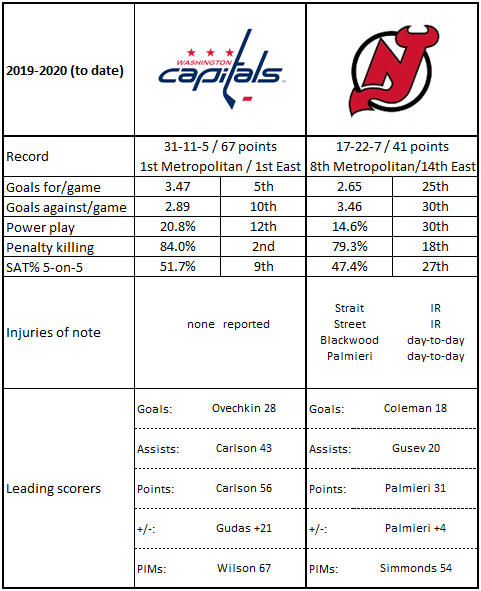 2.  On the other hand, the Devils can be stingy late in games on the road.  Their 19 third period goals allowed is fewer than all but three teams: the New York Islanders (17), Dallas Stars (17), and Colorado Avalanche (16).

3.  New Jersey does not score much on the road at 5-on-4. Their seven goals in that strength situation on the road are fewer than every other team except Detroit (five).

4.  The Devils can get lit up on the road.  In 23 road games to date they allowed six or more goals five times, tied with Philadelphia for most in the league.

5.  If the Devils win or lose in extra time, they will become the fifth team to record at least 200 standings points against the Capitals since the Caps came into the league.  Philadelphia (258), Pittsburgh (243), New York Rangers (225), and New York Islanders (221) are the others.

3.  Washington is one of four teams that have not lost a game in regulation on home ice when scoring first.  Dallas, Toronto, and St. Louis are the others.

4.  The Caps have more wins on home ice when allowing the first goal (seven) than any other team in the league.

5.  Washington has spent 131:04 shorthanded on home ice in 23 home games.  Only Boston among Eastern Conference teams has been shorthanded for more time, 140:17 in 26 home games.

Only two New Jersey defensemen have dressed for all 46 games this season.  Damon Severson is one of them.  Severson leads the team in minutes per game (22:21).  He is tied for the team lead among defensemen in even strength goals (five, with P.K. Subban).  He leads all Devil defensemen in takeaways (21).  He is one of only two New Jersey defensemen with an empty net goal this season (Subban is the other).  He is tied for the team lead in hits among defensemen (58, with Subban).  Severson has climbed into the top-ten in franchise history in goals scored by defensemen (34/tenth), assists (114/tenth), and points (148/tenth).  He just does not seem to command a lot of attention.

He might have deserved more attention lately, having gone 2-7-9, even, in his last 13 games, including a three-point game (1-2-3) in a 7-1 win in Chicago over the Blackhawks on December 23rd.  He has been especially productive on the road of late, that outburst against Chicago being the start of a six-game run on the road in which he is 2-4-6, plus-5.  It is part of a season-long tilt toward road games in terms of production.  Severson is 4-6-10, even, in 23 road games, but just 1-5-6, minus-12 in 23 home games.  Keeping Severson off the score sheet would be wise, as is the case with defensemen supplying second level scoring support.  The Devils are 3-1-1 in the five games in which he has goals this season, 6-4-2 in the dozen games in which he has points.  In 19 career games against Washington, Severson is 2-4-6, minus-13.

In Alex Ovechkin’s remarkable career he averages fewer goals per game against the New Jersey Devils (0.47) than he does against any other Eastern Conference team.  Part of the relative lack of goal scoring is that he has only three career power play goals against New Jersey, fewest among all Eastern Conference opponents.  Another factor has been his shot volumes, which the Devils have been able to minimize over his career.  Ovechkin averages only 3.67 shots per game over the 55 career games he has played against New Jersey, second lowest average against an opponent over his career (he averages 3.65 shots per game in 20 games against Vancouver).  On the other hand, his career plus-28 against New Jersey is at least ten ratings points better than his plus-minus against any other team (plus-18 against Ottawa).

The Caps suffered their most lopsided loss on home ice when they lost to the Devils, 5-1, last weekend.  It was the first time that the Caps lost a game by four or more goals on home ice since dropping a 4-0 decision to St. Louis back on March 26, 2016.  One would think that the Caps would be motivated to make amends, send a message, return the favor, or just stomp the Devils for their insolence.  That the Devils have allowed 14 goals in their last three road games suggests this could happen (the one goal they allowed the Caps was sandwiched between six goals allowed to the Rangers and seven to the Maple Leafs).  The Caps will be trying to shake off some home ice problems in the offensive end of the ice, having scored only three goals in their last two games at Capital One Arena after posting 11 in their previous two home games.  What was good for the goose last weekend will be good for the gander on Thursday.