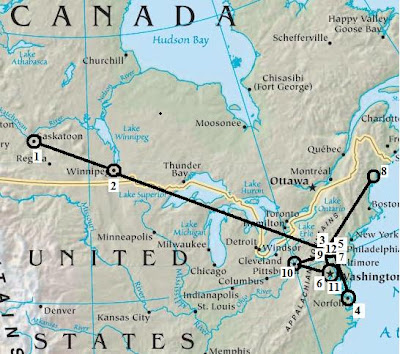 And you complain about needing a vacation.
Posted by The Peerless at 3:50 PM 2 comments:

The Peerless Prognosticator is ON THE AIR!!! -- Caps vs. Coyotes, January 23rd

The Caps host the Phoenix Coyotes tonight as they return home from a 6-3 pasting of the Pittsburgh Penguins….

“The letter "P". My favorite letter.”

“’Cause of all the great things that begins with the letter "P".
There's puck, points and poke check.
There's power play, periods, passes.
There's Poti and Pettinger…”

(not any more on that last one…)

Today’s representative of the letter “P” is Phoenix, as in the Phoenix Coyotes, a team largely given up for dead, a carcass that was available to be shipped to a town in Canada near you sometime in the near future. It was a team that was considered as much a lock as could be for a lottery draft pick in June.

Well, Coach Dave Tippett and 20 ornery desert dogs had other ideas. The Coyotes sprinted out of the gate with a 9-4-0 October. After stumbling a bit through a 6-7-1 November, they got back on their feet and finished December with a 10-2-3 record for the month. You could say that their 4-4-1 record in January might be a signal that they are returning to earth, but it isn’t as if the four regulation losses have come against stiffs – Detroit, Vancouver, San Jose, and Buffalo. And they beat New Jersey and the surprising Nashville Predators for good measure.

If there is a parallel, performance-wise, that Caps fans might want to consider, it would not come from hockey, but baseball. Are these Coyotes, coached by a veteran player and coach, populated by a collection of youngsters (Peter Mueller, Martin Hanzal, Keith Yandle), vets approaching the tail end of their tours (Robert Lang, Adrian Aucoin), and reliable workhorses (Shane Doan, Ed Jovanovski) the real deal? Or are they the NHL equivalent to the 2005 version of the Washington Nationals – a somewhat undermanned, unheralded team that got off fast (19 games over .500 in July 2005) only to crash and burn in the second half of the year?

From the overall numbers, it’s hard to think of the Coyotes as a team really built for the long haul this year… 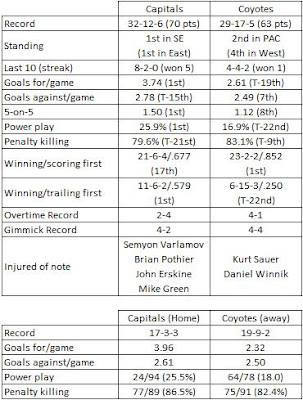 Those numbers are fair, but the Coyotes are certainly a team than plays very close to the margin – they have the fourth best winning percentage in one-goal games (.625 on a record of 15-4-5). Here is an ominous indicator… in games in which the Coyotes allow more than two goals in regulation time, their record is 5-14-1. That places quite a burden on their goaltending and defense.

Fortunately for Phoenix, Ilya Bryzgalov has been up to the challenge so far in goal. “Bryz” is tied for fourth in the league in wins (26), ninth in GAA (2.31, including goalies playing at least half their team’s games), is tied for ninth in save percentage (.919), and is tied for second in shutouts (five). But here, too, things might be taking an ominous turn for Phoenix. In January, Bryzgalov is 4-3-0, 3.91, .882, and he has allowed fewer than three goals only once (in a 4-2 win over Nashville on Thursday). The Caps are the only club in the NHL Bryzgalov has not yet faced in his career.

Working our way out, the Coyotes benefit from having three defensemen who have at least 20 points this season – Ed Jovanovski, Keith Yandle, and Adrian Aucoin. Jovanovski and Aucoin might be rather well known to Caps fans (49 games against the Caps between them); Yandle, not so much. A fourth round pick in the 2005 draft, Yandle’ s improvement has been of the slow and steady sort. He had seven games with the ‘Yotes in 2006-2007 to get his feet wet, then split time more evenly between Phoenix and the San Antonio Rampage of the AHL the following year (43 games with Phoenix, 5-7-12, minus-12). He stuck for good last year, getting 69 games of work (4-26-30, minus-4). He’s played in all 51 games to date this season and already has set a career high in goals (six). With 24 points so far, he seems a good bet to set a points mark for his career as well, surpassing last year’s total of 30. In nine games in January he is 0-5-5, even.

Zbynek Michalek is another defenseman that Caps fans might not recognize straight off. Michalek leads the defense in plus-minus so far (plus-9), but it is worth noting that he had a brutal game last Monday, going minus-5 in a 7-2 loss to Buffalo.

Phoenix does not bring the firepower to the show that the Caps possess, but what they do have is balance. 15 skaters are in double digits in points, led by right wing Shane Doan (14-20-34), now in his 14th season in the desert. If you were to call Central Casting and order up a “hockey player,” you would probably get a guy like Doan. He has been tough and durable… missing only 25 games over the past 10 and a half seasons. He’s been consistent… nine straight years of 20 or more goals coming into this year, eight years in that span getting 50 or more points (49 in the other). He’s been clutch… 41 game-winning goals in the last nine and a half seasons. He’s been faithful… spending all 1,048 games (regular season and playoffs) of his career with one organization. He is 4-4-8 in nine games in January; in 17 career games against the Caps he is 3-6-9.

While Doan – “Mr. Coyote,” if you will – leads Phoenix in scoring, the top spot in goal scoring is occupied by Scottie Upshall, now on his third team (Nashville and Philadelphia being his other stops). Obtained from Philadelphia for Daniel Carcillo last March, this is Upshall’s first full year in Phoenix, and it appears to be to his liking. He potted eight goals in 19 games to close the season last year, and the 17 goals he has in 46 games this year puts him on a pace (28) that would double his career high – 14 with the Flyers in 2007-2008. As if to emphasize the point going into tonight’s game, Upshall had a hat trick his last time out, the 4-2 win over Nashville on Thursday. What he doesn’t have is a career goal against the Caps; he is 0-1-1 in eight games.

When last seen in these parts, the former third round pick of the Capitals was on the ice for all three goals in a 3-1 loss to the Carolina Hurricanes on December 7, 2008. It was the last game in a seven-game call-up from Hershey in which Lepisto went 0-4-4, minus-3 (three of the assists coming on power plays). Although he had only 14 career games with the Caps, he was caught in a numbers game here with several defensemen passing or projected to pass him on the depth chart. He also had the faint look of a player who might dominate at the AHL level (he was plus-53 in 125 games at Hershey over two years), but who might lack the size, strength, or skill to make it in the NHL. Well, he’s carved out a niche for himself so far in Phoenix—0-7-7, minus-1 in 43 games, getting almost 18 minutes of ice time a night. Something to watch for… he’s still looking for his first NHL goal. He might be excused for wanting to break that schneid against his former team in their rink.

Phoenix is likely to play this one as close to the vest as is possible, lacking as they do the firepower to run with the Capitals. It is likely to be a slog, and that is where a player such as Laich comes in. He had two goals against the Flyers last week to give indications he was coming out of his goal-scoring slump. And, he’s had some success in limited action against Phoenix (1-2-3 in three games). He had a power play goal in the teams’ only meeting last season, a 2-1 win for the Caps in Phoenix on October 23, 2008.

1. Don’t take dictation, give dictation. The Caps might be ripe for an off-game here after their 6-3 win over the Penguins on Thursday. Watch for whether the Caps dictate pace. If they come out lethargic, it plays into the low-scoring, more deliberate sort of game the Coyotes might prefer. Which leads to…

3. 1-2-3-score. The Caps have been getting production out of each of their top three lines lately. Against Pittsburgh, the Ovechkin-Backstrom-Knuble line went 4-2-6, the Semin-Fleischmann-Laich line went 1-2-3, the Chimera-Morrison-Fehr line went 1-2-3. It’s one reason that the Caps have scored at least four goals in eight of their last nine games (45 total goals in those games, a 5.0 average).

In the end, this is a matter of which style of game gets played. If the Caps don’t suffer a letdown from Thursday’s win and play at a high tempo, they win. Phoenix doesn’t have the skill or depth to deal with that. If, on the other hand, this becomes a game played zone-to-zone, where Phoenix can play a more structured game and take advantage of mistakes, impatience, or lackadaisical play on the part of the Caps, Phoenix could pull out a low-scoring sort of game. The Caps have been on a roll this month – 45 goals in their last nine games, an 8-1-0 record, and they passed three important tests this week. Tonight’s test is to see if they can avoid the letdown…