The Peerless Prognosticator is ON THE AIR!!! -- Game 81: Washington Capitals at Boston Bruins, April 8th

The Washington Capitals take their final road trip of the regular season when they head to Beantown to face the Boston Bruins in a Saturday matinee matchup. The Capitals, who spent most of the season as a good, if not particularly elite road team in terms of record, have won six of their last seven road contests since dropping all three games in their annual California trip.

Boston comes into this contests as perhaps the streakiest team in the NHL at the moment. In their last 25 games, the Bruins have four winning streaks of three or more games and a losing streak of four games. They had a six-game winning streak, their longest of the season, snapped by the Ottawa Senators in a Gimmick on Thursday night.

Over that 6-0-1 run in their last seven games, Boston has done it with defense and goaltending. As far as the latter, it has not mattered whether the goaltender was number one netminder Tuukka Rask or backup Anton Khodobin. Between them, they stopped 187 of 194 shots, a spellbinding .964 save percentage. Khudobin, who is enjoying quite a revival after an awful start to his season, grabbed two of the six wins, allowing just three goals on 62 shots (1.50/.952). It extended a personal winning streak to six straight in his last seven appearances, over which he has a goals against average of 1.98 and a save percentage of .928. This comes after a poor 1-5-1, 3.06, .885 record in his first eight appearances this season. Khudobin in 4-2-1, 2.41, .923, with one shutout in seven career appearances against the Caps.

Khudobin is a credible possibility to start this game because of Tuukka Rask’s mysterious inability to solve the Caps. He comes into this game with four wins and the trick shot loss over the Bruins’ 6-0-1 run, stopping 128 of 132 shots (0.79/.970), and he has a pair of shutouts to go with it. That, however, comes after enduring a personal four-game losing streak over which he allowed 15 goals on 95 shots (4.53/.842).

That brings us to Rask’s almost bizarre lack of success against the Caps. In 15 career appearances, he has never won a regular season game against Washington in which he allowed a goal. He pitched a 16-save shutout in a 3-0 Bruins win at TD Garden on March 6, 2015. In his other 14 appearances, Rask has 14 losses – nine in regulation and five in extra time, all of them in overtime (no Gimmicks here). It is not as if his record is ghastly against the Caps; he has a career 3.14 goals against average and a .887 save percentage, and he has allowed more than four goals in a game to the Caps only once. One might think that would be good enough, if not for a winning record, then at least a few more wins along the way.

Among the skaters, David Pastrnak leads the team in points in their 6-0-1 run, going 2-4-6. In a way, Pastrnak has been a microcosm of the Bruins’ last month – streaky. He was kept the scoresheet in the loss to Ottawa on Thursday, but he still has points in five of his last six games, which followed a point in four games, which followed an 11-game points streak. Generally, Pastrnak has been a very productive player over his last 32 games, going 15-22-37, minus-1, three of those goals being game-winners. He is 1-3-4, minus-3, in five career games against Washington.

Patrice Bergeron leads the club in goals over their 6-0-1 stretch, potting four pucks over those seven games. The short burst in goal scoring follows a nine-game streak without one, tying his longest goal drought of the season. The four goals gave Bergeron 21 on the season, making it six straight full seasons (not including the abbreviated 2012-2013 season) in which he recorded 20 or more goals. He will be appearing in his 899th career game on Saturday, all of them with the Bruins, the fifth highest games-played total in team history spanning 92 seasons. Few players this season are as skilled as Bergeron in perhaps the most basic of plays – the faceoff. Among 55 players taking at least 1,000 draws this season, Bergeron ranks third (59.9 percent), behind only Anaheim’s Antoine Vermette (62.3 percent) and Colorado’s Matt Duchene (62.7 percent). Duchene’s rank might explain the fact that the Avalanche are the only team in the league this season to hold Bergeron under 50 percent in faceoffs in a game twice. Bergeron is 10-25-35, minus-5, in 40 career games against the Capitals. 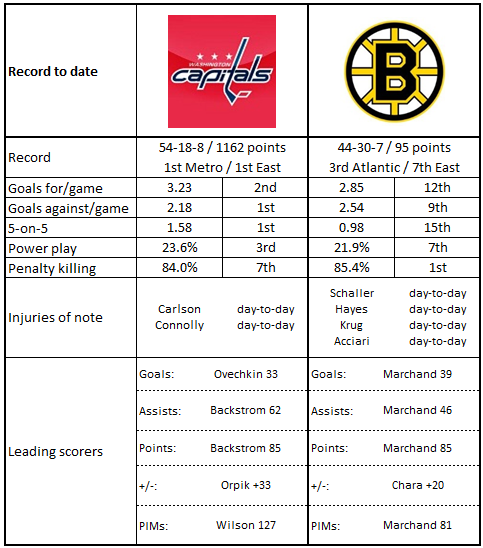 1.   The Bruins do not work and play well with others. They are the sixth-most penalized team in the league (342 total penalties) and are tied for sixth in minor penalties taken (299, with the Florida Panthers).

3.  Only one team in the league has recorded more shots on goal this season than the 2,699 recorded by the Bruins (Pittsburgh: 2,703).

4.  With all the shooting, the Bruins are not an especially successful team when out-shooting opponents. No team has out-shot opponents more times than Boston (59 in 81 games), but their winning percentage in those games of .508 is just 12th in the league.

5.  One has to wonder about that peculiar disconnect between out-shooting teams and winning, since the Bruins are the second best team in the league in shot attempt shares at 5-on-5. Their Corsi-for (54.77 percent) is second only to the Los Angeles Kings (55.12). Their adjusted Corsi-for (for score, zone, and venue) is best in the league at 54.86 percent (numbers from Corsica.hockey).

1.  Braden Holtby leads the league with 42 wins, one more than Columbus’ Sergei Bobrovsky and Edmonton’s Cam Talbot.  If he wins on Saturday or Sunday (assuming Philipp Grubauer will get one the starts in the back-to-backs to end the regular season, and neither Bobrovsky nor Talbot win both of their remaining games, Holtby would become the first goaltender to lead the league in wins in consecutive seasons since Martin Brodeur led the league in four straight seasons from 2002-2003 through 2006-2007.

2.  No team has more Gimmick losses on the road this season than the Caps.  They, along with Florida, Toronto, and Carolina, have four such losses.

3.  Washington has the second-best power play on the road this season at 25.9 percent (Toronto is at 28.1 percent).

4.  The Caps have three players with three game-winning goals on the road this season.  Alex Ovechkin is not one of them; he has one.  Marcus Johansson, Evgeny Kuznetsov, and T.J. Oshie are the three.

When one thinks about who among the league’s defensemen are the go-getters when it comes to power play points, the names Erik Karlsson, Brent Burns, and even perhaps the Caps’ Kevin Shattenkirk come to mind.  A name that might not is that of Torey Krug.  But there he is, tied for fourth in the league among defensemen with 25 power play points this season.  The odd thing about his production is how little it seems to matter in the bigger picture.  The Bruins are 3-3-0 when he recorded a power play goal, 11-6-2 when he recorded a power play assist.  In fact, Boston is 1-2-0 when he recorded one of each.  When he records points of any nature, though, Boston is 27-10-3, 17-20-4 when he does not.  Krug is 0-1-1, minus-6, in 11 career games against the Caps, but is listed as day-to-day with a lower body injury.

Daniel Winnik has had a nice little scoring run of late.  He is 3-2-5, plus-5, in his last seven games with points in four of them.  Not bad numbers for a fourth liner, even over a small sample of games.  He is also one of 14 Capitals with at least ten points in road games this season (3-9-12).  He has one of those goals and two of those assists in his last four road games.  As it is, Winnik already has a career best in goals scored in a season (12), topping the 11 he had with Colorado in 2010-2011 and in his rookie season in Phoenix (now Arizona) in 2007-2008.  It is a product of a keen eye shooting the puck, his 15.0 shooting percentage being the best of his ten-year career, the only time in those ten years he shot better that 10 percent for a season.  Winnik is 3-2-5, minus-2, in 16 career games against Boston.

It is all about seeing things to their completion and doing things the right way, taking good habits into the postseason by repeating them in these last two games of the regular season.  With the Caps already having set a team record for wins in a season at home, closing the road portion of the season on a 6-1-0 run would put them in an enviable place as the postseason gets underway.

Posted by The Peerless at 5:59 PM No comments: