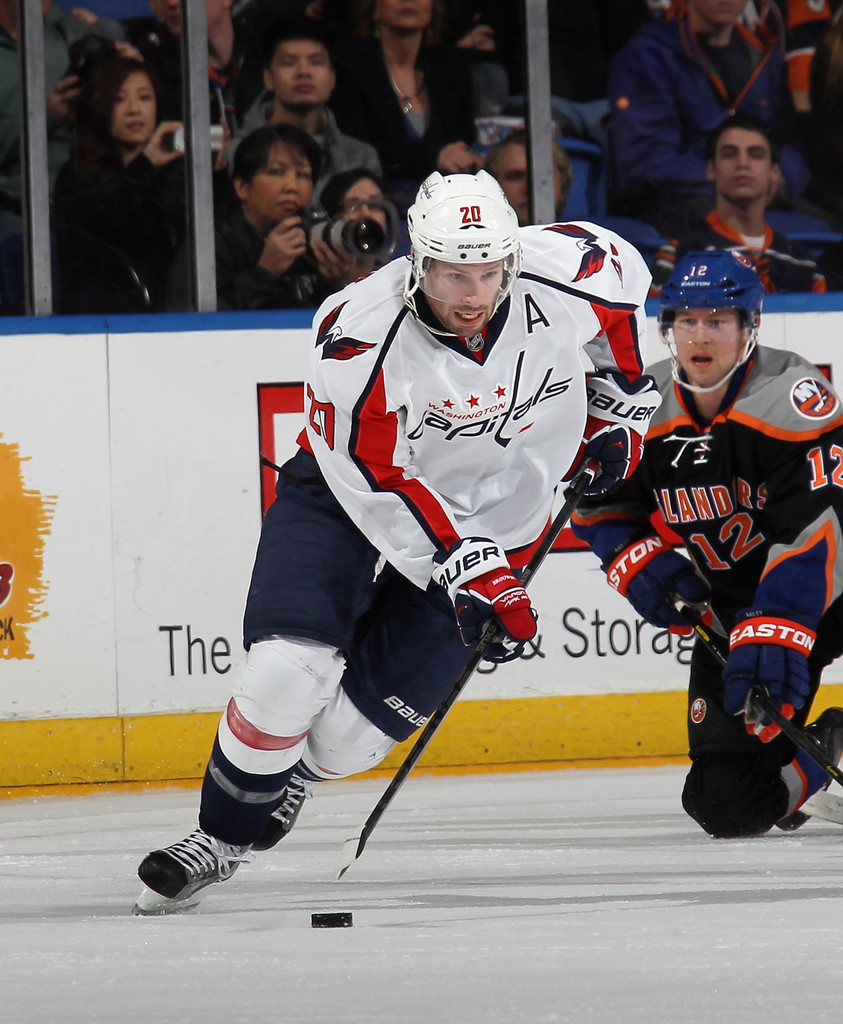 Pavel Datsyuk, John Tavares, James Neal, Anze Kopitar, Troy Brouwer.  What, pray tell, do these five forwards have in common?  All of them had 16 power play points in the regular season. Brouwer had as many power play goals as Zach Parise and Logan Couture.  He had as many power play assists as Patrick Kane, Daniel Sedin, and Patrik Elias.

It was a powerful year for Troy Brouwer.

Here is how powerful.  His 7-9-16 line on the power play in 47 games almost equaled his power play output over the last two seasons combined – 10-8-18 over 159 games.  He was 12th overall in 5-on-4 goals scored per 60 minutes (players with at least 100 5-on-4 minutes played), no mean feat when teammate Alex Ovechkin led the league in that statistic.  And his finishing 26th in 5-on-4 assists per 60 minutes at 5-on-4 was almost as impressive in that centers dominated the top-25 in that statistic, including teammates Mike Ribeiro (first) and Nicklas Backstrom (fifth).  He was 12th overall in 5-on-4 points per 60 minutes (all numbers from stats.hockeyanalysis.com).

In fact, Brouwer’s 5-on-5 numbers were rather ordinary in the context of the Capital forwards.  For instance, his total points per 60 minutes at 5-on-5 were identical to that of Wojtek Wolski, who couldn’t get a sweater at a concession booth over the last half of the season.  Where he did shine, though, was in goal scoring at 5-on-5.  He finished second on the club to Alex Ovechkin, and his 0.884 goals-per-60 minutes at 5-on-5 was in the ball park with such wingers as Corey Perry (0.861) and Bobby Ryan (0.863) in Anaheim, Patrick Kane in Chicago (0.887), and Tyler Seguin in Boston (0.892).

Brouwer is a useful indicator of some second-line problems that hit the team from time to time.  Over the course of his 47 games the two players with whom he played the most at 5-on-5 were the two scoring line centers, Mike Ribeiro (301 minutes) and Nicklas Backstrom (259 minutes).  Looking at Brouwer’s production with Ribeiro and without, he finished with a GF20 (team goals for per 20 minutes) value of 0.532.  That number increased when Brouwer and Ribeiro were separated (0.645).  The opposite was true with Nicklas Backstrom.  When playing with Backstrom, Brouwer’s GF20 value was 0.619, when apart it was 0.568.

What the Caps might want to look at with Brouwer is his role as a penalty killer.  In 2011-2012 six Capital forwards recorded more than 50 minutes of 4-on-5 ice time, and Brouwer had the third best GA20 (opposition team goals scored per 20 minutes, as measure at stats.hockeyanalysis.com) with a value of 2.286 goals against per 20 minutes of ice time.  This year, that value ballooned to 2.858 goals against per 20 minutes of ice time, second worst on the team (Nicklas Backstrom was worst).  It is a comparatively new role for him, his having finished eighth among forwards in total shorthanded ice time in Chicago in 2010-2011.  The silver lining is, if he improves, the Caps penalty killing improves, and it sure could use improvement. 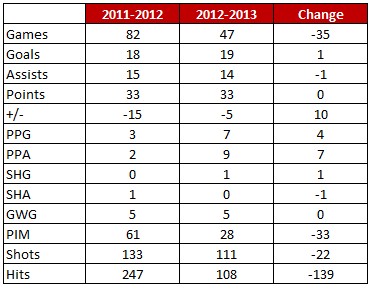 Odd Brouwer Stat… Brouwer scored goals at a 33-goal pace per 82 games this season, and you would think he did it by posting a career best in shooting percentage.  You would be wrong.  His 17.1 percent shooting percentage this season was his second best in his seven-year career, bested by his 19.0 percent in his 22-goal season in 78 games in 2009-2010 with Chicago.  The thing is, he hasn’t finished lower than 13.5 percent in any of the last four seasons.

Game to Remember… March 21/22 vs. Winnipeg.  The Caps needed a lift.  When they took to the road to Winnipeg for games on March 21st and 22nd, they sat in 14th place in the Eastern Conference, seven points out of eighth place and nine points behind Winnipeg, then leading the Southeast Division.  Worse, the Caps were coming off a tough 2-1 loss in Pittsburgh before heading west.  In the first game of the back-to-back in Winnipeg, Brouwer got the Caps off on the right foot with a goal just 3:06 into the game. It would prove to be the game-winner in a 4-0 win.  The following night, Brouwer scored less than four minutes after Brooks Laich opened the scoring in the first period, and it, too, proved to be the game-winner in the Caps’ 6-1 pasting of the Jets.  For the series, Brouwer was 2-0-2, plus-3, five shots on goal, two hits, a blocked shot, and he was 5-for-6 on faceoffs.

Game to Forget… February 27th vs. Philadelphia.  The Caps were coming off back-to-back solid performances, a 5-1 win over New Jersey and a 3-0 win over Carolina at home.  Then they visited Philadelphia the night after the win over the Hurricanes.  They – and Brouwer – were flat.  With the Flyers holding a 1-0 lead, Brouwer was a half-tick too late getting his stick in the way of a Scott Hartnell shot on a Flyer power play.  Goalie Braden Holtby made the first save, but Wayne Simmonds potted the rebound.  Then, with the Flyers up 3-0 late in the second period, the home team iced it when Max Talbot wired one in.  Brouwer might have been the unluckiest man on the play, for he had just stepped onto the ice to replace Alex Ovechkin when the goal was scored.  He was not within 50 feet of Talbot, but he got credit for being on ice for the score.

Post Season… There were times this season when Brouwer was either unlucky or unaware on defense, and it came to a head in Game 7 against the Rangers.  He was caught in no-man’s land in the slot covering no one in particular when Taylor Pyatt put the Rangers up, 2-0, less than four minutes into the second period.  Barely two minutes later, he went to bended knee to try to block a drive by Michael Del Zotto, but all he got was air as the puck sailed by and past goalie Braden Holtby for a 3-0 Ranger lead.  The third straight goal he found himself on the ice for, just 13 seconds into the third period, he had no fault in, Ryan Callahan stripping the puck from John Erskine at the red line and skating in on a break to end the competitive portion of Game 7.  But his minus-3 was his worst such finish of the season, and the three goals against for which he found himself on ice were more than his total for the first six games combined (two).  Six pretty good games and then, like the rest of the team, an egg laid on home ice.

Brouwer had a fine year, made better by his performance on special teams.  But with the pleasure, there is the pain.  He did not have an exceptional year at even strength, rather one very much in line with his career norm.  And when the power play came up short in the playoffs – three goals scored in seven games – the lack of extraordinary production on Brouwer’s part at even strength, again like much of the team around him, took on more weight.  He was a capable secondary scorer who might have benefited more from Adam Oates' wizardry in drawing up the power play than any player not named “Ovechkin.”  But, in the end, it was not enough, either for him or for his teammates.

Posted by The Peerless at 3:43 AM No comments: