The Washington Capitals had a light work load in Week 17, just two games for the second consecutive week, but it did not keep them from returning to their winning ways after a winless Week 16.  A win over the Florida Panthers gave the Caps something to build on as they headed into the All-Star Game break.  However, it came at a cost with one of their best players sustaining an injury that could leave the Caps short for a while. 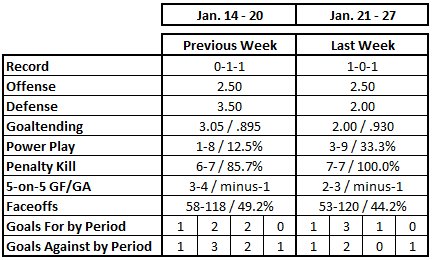 Week 17 was the flip side of Week 16, both weeks including a loss in overtime, but the Caps won a game in the latest week, reversing their loss in regulation recorded in Week 16.  All in all, it is hard to get too irritated with the Caps’ 1-1-2 record over the past two weeks.  It has to be difficult to sustain any rhythm or high-motor when you play only four games over a 13 day period with a five-day break for the league-mandated bye and another three full days between games before the pre-All-Star Game finale.

The best part of winning the last game before the All-Star Game break and finishing the last two weeks with that 1-1-2 record is that the Caps take a six-point lead over the rest of the Metropolitan Division into the break, and they hold two games in hand on the suddenly streaking Pittsburgh Penguins, tied with the Columbus Blue Jackets for the second spot in the division.

As the Caps go into the All-Star Break, there is an oddly pleasant surprise about their record – its consistency.  First, consider that the team lost Matt Niskanen for 14 games, T.J. Oshie for six games to injury, and have had a lot of inconsistency from Andre Burakovsky in addition to injury that kept him out for 25 games.  And yet, if you look at the Caps in ten-game segments going into the break (nine games in the last segment), their records are:

They have the third best record in the league since November 1st (24-9-4/52 points) trailing only the Nashville Predators (24-7-5/53 points) and Boston Bruins (25-7-5/55 points).  Their consistency and continuing success will be tested, though, with Evgeny Kuznetsov suffering what appeared to be a groin injury in the Caps’ 4-2 win over Florida to end the week.  His absence will be keenly felt and will test the Caps’ ability to close ranks and move forward. 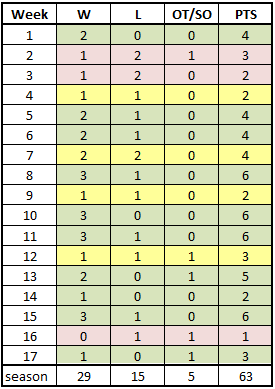 Two games, five total goals.  Same as Week 16.  If there was concern about that, it was that the Caps scored only two even strength goals for the week, one by Alex Ovechkin and one by John Carlson.  They did get points from 11 different skaters, so in that respect there was a measure of balance.  Ovechkin (three), Carlson (two), and Evgeny Kuznetsov (two) were the Caps with multi-point weeks.

But it was not an especially efficient week for the Caps.  This has been a very discriminating team this season in terms of shots, ranking 31st in the league in shots per game at week’s end.  They did, however, record 74 shots in the two games in Week 17, including 46 in the 4-2 win over the Florida Panthers to close the week.  The 6.8 percent shooting percentage was a far cry, though, from the 10.3 percent for the season.

The shots for the week extended what, for the Caps this season, is an odd streak.  In outshooting the Philadelphia Flyers (28-23) and the Panthers (46-34), the Caps have now gone four games without being out-shot, their longest such streak of the season.

The Caps have yet to cut loose, though, so far in the 2018 portion of the season.  They did score four goals against the Panthers, but they have yet to score more than that in regulation in nine games so far in 2018 (they did score a fifth goal in a 5-4 overtime win over Carolina in the first game of the new year).

The Caps have struggled at times with the volume of shots allowed, having allowed teams 35 or more shots 17 times going into Week 17.  They came out of the week without adding to that total, holding Philadelphia (23) and Florida (34) to a total of 57 shots.  In fact, that made four straight games that the Caps held teams under 35 shots, their longest streak of such games since mid-November, when they had an eight-game streak.  The Caps might finally be finding their defensive posture as a result.  Not since they allowed four goals to the Carolina Hurricanes in the first game of the calendar year have the Caps allowed four goals in regulation.

What was just as encouraging was the shot attempts allowed at 5-on-5.  The Caps allowed just 71 in the two games.  It was what drove a week in which the Caps shot attempts-for percentage was a very good 56.97 percent overall (numbers from NHL.com) and an even better 60.14 percent in close situations.

Braden Holtby got both starts in Week 17, and it was a very good week.  Holtby (and backup Philipp Grubauer) have had to deal with heavier and higher quality shot volumes this season, and it shows in the overall numbers (although Grubauer is particularly a victim of low goal support).  With a bit lower shot volume to contend with, Holtby resembled more the goalie Caps fans saw the past two years.

What was noteworthy about the week for Holtby was how he closed out games in regulation.  He stopped all 18 third period shots he faced in the two games for the week.  Not that he was a slouch in the first periods of games, where he stopped 18 of the 19 shots he faced (.947 save percentage).  It might have been a great week had he turned away the only shot he faced in overtime, but Travis Konecny scored on the only shot the Flyers recorded in overtime in the first game of the week to take a 2-1 decision.

The Caps had their best week –efficiency-wise – since Week 2.  With a 33.3 percent power play on a 3-for-9 week, they matched the 33.3 percent they had on 5-for-15 in the second week of the season.  The three goals were scored by three different players – Ovechkin, Brett Connolly, and Nicklas Backstrom.  Eight different players had power play points, Ovechkin having two as the only multi-point player with the man advantage.

The big thing for the power play in Week 17 was the shot volume.  Washington recorded two goals on 19 shots on goal against the Panther penalty killers in 9:24 of power play time on their way to finishing the week with three goals on 22 shots in just 14:08 of ice time.  On the other hand, the Caps did allow the Panthers four shots while shorthanded, which it a bit too loose for comfort on the man advantage. 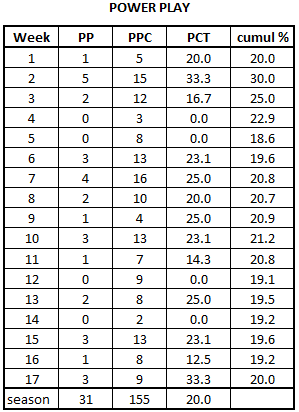 Week 17 was the sixth time that the Caps spent a perfect week killing penalties and their fourth in the last nine weeks, over which they are 59-for-70 (84.3 percent), an improvement over their full season penalty killing rate that was still under 80 percent overall before Week 17 started.  The perfect week made the Caps 13-for-14 over the past two weeks (92.9 percent).

The Caps were efficient as well as effective.  They allowed the Flyers and Panthers only 11 shots on goal in 14 minutes of shorthanded ice time in killing seven power plays. 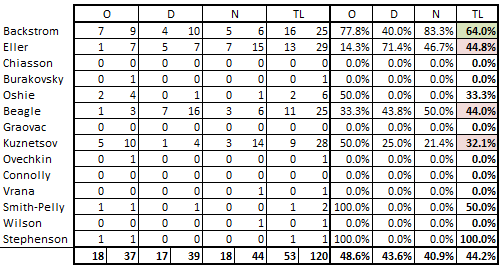 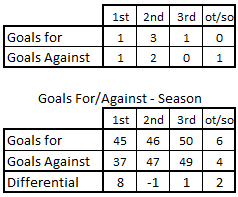 The Caps managed comparatively solid work holding teams off the scoreboard early.  They did allow one first period goal in two games, but that brought their total of first period goals allowed this season to 37, ten fewer than what they have allowed in the second periods of games and 12 fewer than in the third periods of games.  Those 37 goals allowed is now tied for tenth-fewest in the league.

That the Caps are six points clear of the rest of the division at the All-Star break, despite losing significant players (Matt Niskanen, T.J. Oshie, Andre Burakovsky) for large parts of the schedule is no small feat.  To do so in arguably the toughest division in the league and to do so on pace to finish with 49 wins and 105 points is perhaps even more impressive.

Week 17 had that blemish of an overtime loss to a division rival, but overall they were stingy on defense, had better possession numbers, dominated shot totals, and had very good special teams play.

And, with just two games in Week 17, the Caps showed enough discipline and focus to earn points in three of four games played over a 13-day period.  It was the sort of scheduling quirk that could have resulted in a loss of focus and a bleeding away of the division lead.

The Caps will start their rush to the trading deadline in a good position, but there will be a challenge right out of the All-Star break.  With four of their next six games to be played on home ice, and four of those six games against division rivals (Philadelphia, Pittsburgh, and a home-and-home against Columbus), the object will be to put some additional distance between themselves and the rest of the division before they embark on a four-game road trip in the middle of February.  And they will have to do so wondering to the extent Evgeny Kuznetsov will be available.  Nevertheless, Week 17 set the Caps up to address that challenge from a position of advantage.

Posted by The Peerless at 10:30 AM No comments: