What, you thought this would be easy?

The Washington Capitals could not stick a fork in the playoff hopes of the Winnipeg Jets last night and fell to the Jets, 3-2, at MTS Centre.  For the Caps it was the end of a four-game winning streak and a missed opportunity to draw within a point of the Florida Panthers for the top spot in the Southeast Division.  For the Jets, the win enabled them to halve their deficit with the Caps, from four points to two, in the battle for eighth place in the Eastern Conference.

This game was a matter of two teams trading shots – not many, as it turned out (50 in all between them) – and alternating goals.  Andrew Ladd recorded his fourth goal in his last five games when he opened the scoring in the game’s 12th minute.  The announcement had not yet been made when Brooks Laich answered for the Caps 22 seconds later.  Marcus Johansson kept the puck in at the Winnipeg line and snapped a shot at the net with two Caps headed there.  Tobias Enstrom had a choice to make – Alex Ovechkin or Laich.  He chose to step up on Ovechkin as Laich got behind everyone.  It was then only for Laich to get his stick on Johansson’s shot and redirect it past goalie Ondrej Pavelec to tie the game.

After Nik Antropov regained the lead for the Jets in the second period, Mathieu Perreault knotted things up again in the first minute of the third period on a power play.  It was not so much a product of the Caps’ being on the man advantage, though.  It was an eight-second man-on-man battle between Perreault and Jets defenseman Ron Hainsey.  Troy Brouwer sent the puck around the boards from the right wing corner.  It came out on the left side where Perreault and Hainsey jabbed at it.  Perrault came out with it and tried getting a shot off from the left wing faceoff dot.  Hainsey got a stick on it, but the puck came right back to Perreault. With Hainsey down on one knee and no other Jets in the vicinity, Perreault had a couple of beats to pick his spot.  He snapped the puck past Hainsey and Pavelec, and the game was tied a second time.

Dustin Byfuglien would break the tie for the last time just over nine minutes into the period.  With the teams at four-on-four, the Caps could not clear the puck.  Winnipeg worked it around the perimeter to Evander Kane at the left point.  Kane skated the puck down to the blue line and centered it for Byfuglien, who bulled his way to the top of the crease and with inside position on defenseman Karl Alzner.  Byfuglien redirected the feed past goalie Tomas Vokoun for the final margin.

-- How could that last goal have happened?  Well, let's look at the NHL.com feed… 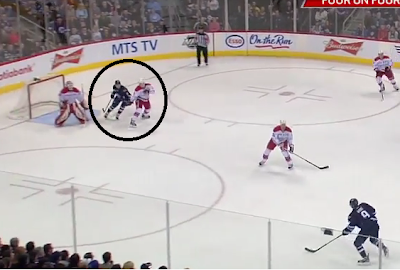 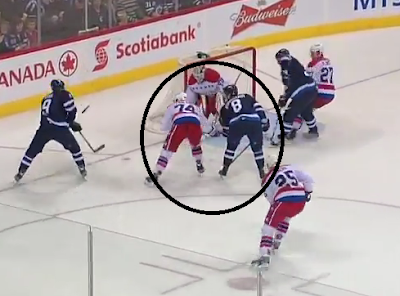 That first picture is at the 10:45 mark of the period.  In the circle, Alexander Burmistrov grabs the stick of Caps defenseman John Carlson and holds on for dear life.  The second is at the 10:41 mark and he still holding on as Kane is sliding the puck across for Byfuglien to tap in.  One referee is on the far side of the play, the other at the blue line, neither (apparently) seeing what should have been a two-minute penalty.  Oh, and look at Byfuglien's feet in the second picture.  Is that blue paint under them?

-- That aside, the Jets got production from players who have been producing lately – Ladd’s fourth goal in five games, Wheeler getting a point in his sixth straight game, Byfuglien with a goal and an assist (he is now 5-16-21 in his last 16 games).  The Caps did not.  Alex Ovechkin had five shots on goal without a point, and Alexander Semin had two shots on goal but was on ice for two of the Jets’ goals, to name two.

-- The Caps could not find a way to deal with Dustin Byfuglien.  He had the goal and assist, but he also had nine of the Jets’ 28 shots on goal.  The Caps were his china shop last night.

-- Give the Caps credit for one thing last night.  It was the first time since the opening night of the season that Winnipeg was awarded at least five power play goals at home and failed to convert any of them.  Tomas Vokoun turned away all eight shots he saw on the Winnipeg power play.

-- Brooks Laich is quietly putting together a nice run.  With his goal last night he has four in his last six games.

-- As for the “hit” by Mark Stuart on Marcus Johansson, that isn’t even legal in football.  That the penalty wasn’t called is incredible, seeing as how it was in open ice and a blow delivered by extending his arms to Johansson’s head.  If the league does not address the matter, one will wonder what Mike Green was doing sitting out for three games.

-- Speaking of Green, one can appreciate his changing role in this team’s structure, but no shots on goal in 18 minutes of play.  Green has not recorded a point since he had a four-point game (2-2-4) against Detroit on October 22nd.  Yes, there was that intervening injury and surgery and rehab, but his production is going to have to pick up if the Caps are going to catch Florida…or even hold off Winnipeg or Buffalo.

In the end, the Jets got more out of their big producers than the Caps did out of theirs. Tomas Vokoun probably kept the game closer than it should have been.  It was another opportunity lost in a season in which a lot of that has happened.  There are an awful lot of games of which it might be said after the season, “if only…”


programming note...We will be dark for a couple of days for a road trip of our own.  Hopefully, the Caps are still in the top-eight when we turn the lights back on.
Posted by The Peerless at 5:28 AM No comments: