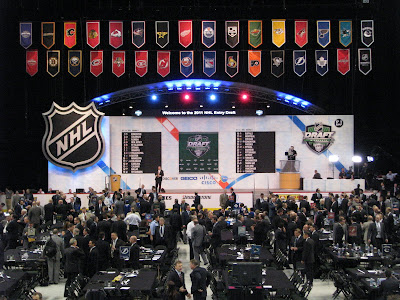 Now that we have finished up the 2011-2012 season with last night’s NHL awards celebration, we turn to futures – the 2012 NHL Entry Draft from Consol Energy Center in Pittsburgh. And we, being in the prognostication business, will offer up our take on who goes where. We make no pretentions about being especially informed on these fine young men. But hey, that doesn’t stop most folks offering up their ruminations, contemplations, and observations. So here are our prognostications…

1. Edmonton Oilers: Nail Yakupov – RW
Nail Yakupov is, as the astute observer of amateur talent knows, an anagram for “Voila, ya punk.” We expect he will announce his presence in the NHL with similar authority.

2. Columbus Blue Jackets: Ryan Murray – D
There have been 41 “Murray’s” who have played or coached in the NHL (either with that surname or that Christian name), including a “Murray Wing” (one game with Detroit in 1973-1974). Now a “Murray” defenseman.

3. Montreal Canadiens: Alex Galchenyuk – C
If this guy had a mob name, would it be Alex “The Chin” Galchenyuk?

4. New York Islanders: Filip Forsberg – C
There has been only one other “Forsberg” in NHL history. He was a center too. Oh, and as Joe Beninati might say… “no relation.”

5. Toronto Maple Leafs: Mathew Dumba – D
Let me guess… his nickname is “Ears.” For his sake, hope he doesn’t have “rabbit ears” going to Toronto.

8. Carolina Hurricanes: Griffin Reinhart – D
That’s the kind of name that the White House chief of staff character that goes to prison at the end of a made-for-TV movie has, not a hockey player.

9. Winnipeg Jets: Jacob Trouba – D
Little known fact… as a youngster, “Trouba” played the “Tombone” in marching band. OK, we made that up. There is no such thing as a Tombone.

10. Tampa Bay Lightning: Teuvo Teravainen – LW
For those of you with prior engagements, be sure to TiVo Teuvo.

11. Washington Capitals: Radek Faksa – C
The Capitals have never had a player named “Radek” on its roster. That’s good enough for us.

12. Buffalo Sabres: Cody Ceci - D
How does a kid with two names you’d give a poodle end up playing hockey?

13. Dallas Stars: Olli Maatta - D
We eagerly await the rest of the clan – brothers Whatsa and Itdont – to reach the NHL.

15. Ottawa Senators: Zemgus Girgensons - C
Shouldn’t he be laughing maniacally and plotting the takeover of the world?

20. Philadelphia Flyers: Thomas Wilson - RW
I got nothing here.

21. Buffalo Sabres: Malcolm Subban - G
You gotta hope this kid makes it in Buffalo and shuts out his big brother.

22. Pittsburgh Penguins: Scott Laughton - C
Loved him in “The Hunchback of Notre Dame.”

23. Florida Panthers: Slater Koekkoek - D
Barend Cornelis Koekkoek was a Dutch landscape artist and father of Johannes Hermanus Barend Koekkoek. Neither of them played professional hockey, so Slater… you’re probably going to be the first Koekkoek to make the NHL.

27. Phoenix Coyotes: Tanner Pearson - LW
So, is there a brother who is less tan?

28. New York Rangers: Pontus Aberg - LW
An anagram for “onstage burp?” Now that would be embarrassing.

29. New Jersey: Dalton Thrower - D
The name “Thrower” is one that is peculiar to eastern regions of England and means someone who twists fiber (wool, mostly) into thread or yarn. Maybe he can twist opponents into knots.

30. Los Angeles: Michael Matheson – D
This kid has the chance to be the first Matheson in the NHL since Godfrey played two games in the 1932-1933 season for the Chicago Blackhawks. No pressure, kid.

Congratulations to all these fine young men and all those not mentioned who will be drafted or, if not selected over the next couple of days will have their chances as free agents to realize their dreams to play in the NHL. Good luck, guys.
Posted by The Peerless at 5:58 PM No comments:

"[Washington Capitals season ticket] renewals at 96 to 97 percent; sold out of season tickets with a waiting list of about 3,000."
-- Sports Business Journal/The Sporting News (source: NHL club officials); June 18, 2012
"We would like to extend to you, a valued full season-ticket holder, the opportunity to purchase additional seats for the 2012-13 season."*
--The Washington Capitals, "Planholder Info;" June 20, 2012

* There is a maximum purchase of four (4) additional seats per account.
Posted by The Peerless at 6:37 AM 3 comments: