Week 19 was the kind of week in which everyone wants to do well.  The last week before the Olympic break, everyone wants to do well to feel good about themselves as they prepare for either a trip to Sochi to compete on the international stage or for a couple of weeks off from the NHL grind.  Then there is the matter of setting oneself up for the stretch run to follow, because once clubs do resume play, it will be 25 or fewer games left in the regular season, and the sprint will be on.  For the Washington Capitals, Week 19 set up the Olympic break about as well as could be expected. 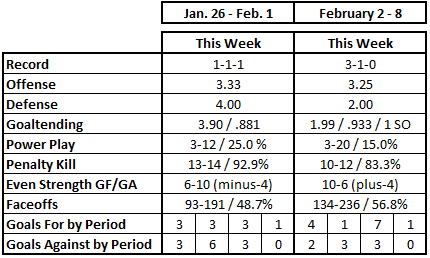 A lot of good things can be said about Week 19.  It was the first winning week for the Caps since Week 15.  It was also their first three-win week of the season.  The Caps broke a seven-game losing streak against Metropolitan Division teams.  They went 2-1-0 against Eastern Conference teams and jumped into fifth place in the division, one point out of a playoff spot.

But there was also that “1.”  That one loss for the week, a 1-0 decision dropped to the New York Islanders.  The Islanders were a team nine points behind the Caps on Tuesday night when the teams met in Washington, a team on a five-game losing streak, a team that allowed 21 goals in those five games.  The Caps could not solve them or goalie Evgeni Nabokov for any, though, and the 1-0 decision was the only thing keeping the Caps from their first four-win week since April 7-13 last season. 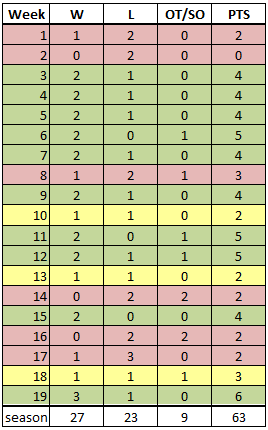 The Caps built on a solid Week 18 in offensive production.  Or so the raw numbers would suggest.  Thirteen goals in a four-game week is the kind of production one would look for on offense, but almost half of that came in a 6-5 overtime decision over the Detroit Red Wings, a game in which the Caps held three two-goal leads.  From an offensive point of view the Caps persevered in that game despite the let downs at the other end.

The rest of the week, though, did not impress.  Getting shut out by the Islanders, a team that went into the game 29th in the league in scoring defense, was difficult to believe, even if the goalie doing the shutting out was one (Evgeni Nabokov) with a history of mastering the Caps.  That game was the obvious example of offensive inconsistency.  The game to close the week, against the New Jersey Devils, threatened to put to sleep anyone watching.  The teams combined for 44 shots and no goals over the first 50:50 of the game.  At that point, things took a turn.  Julien Brouillette scored his first NHL goal.  Then Martin Erat scored his first goal of the season, an empty netter with 1:11 left.  Thirty six seconds after that, Troy Brouwer scored his first empty net goal of the season, and the Caps had what looked like a convincing 3-0 win.

Speaking of Brouwer, he led the Caps with a four-goal week.  For Brouwer it was a welcome change from the one goal in 14 games he was sporting coming into the week.  He jumped past Nicklas Backstrom, Jason Chimera, and Mikhail Grabovski into third place on the club in goals. Nicklas Backstrom did not have a goal for the week, but he did have five assists and went into the Olympic break third in the league in helpers, trailing only Joe Thornton and Sidney Crosby.  Joel Ward had a pair of goals for the Caps to reach 17 for the season, matching his career high set in the 2008-2009 season with the Nashville Predators.

The defense was something of a mirror image of the offense in that allowing eight goals for the week sounds worse than it really was.  Five of those goals came against Detroit to open the week, a game in which the Caps let three two-goal leads get away.  But what the Caps did over the four-game week was hold teams down in shots.  Only once, a 36-shot performance by the Winnipeg Jets, did the Caps allow an opponent more than 30 shots.  It continued a quiet trend for the Caps.  Heading into the Olympic break the Caps have allowed 30 or fewer shots in nine of their last 11 games.

Michal Neuvirth and Braden Holtby split the goaltending duties this week, Neuvirth getting the first two games and Holtby the last two.  Neuvirth opened the week a bit shaky, allowing five goals on 30 shots in the Caps’ 6-5 overtime win over the Red Wings on Sunday.  It was not a case of leaky defense in front of him in every case, either.  A rebound left in the low slot led to Detroit’s first goal, a shot from a low angle fooled him on the second, a backhander slithered through his pads for the fifth goal that sent the game to overtime.

Neuvirth was much sharper in his other appearance, allowing only a third-period goal through a screen on 28 shots faced, keeping the Caps in the contest when the Islanders peppered him with 13 shots in that third period.

When Neuvirth took ill on Thursday, Braden Holtby took over in net and turned in a fine performance against Winnipeg.  Holtby turned away 28 of 30 shots over the first 40 minutes to keep the game tied before the Caps won the third period, 2-0, and the game by a 4-2 margin.

Holtby got the nod in the last game of the week and did himself one, or rather two, better.  He stopped all 25 shots sent upon him by the New Jersey Devils to earn his third shutout of the season and his tenth career whitewashing.  That tenth career shutout made Holtby the fourth goaltender in franchise history to hit double digits in shutouts, trailing only Jim Carey, Don Beaupre, and Olaf Kolzig.

One of the things we look for on special teams is shots per minute.  Put enough pressure on a defense and goaltender in those situations, they will crack.  In the first game of the week the Caps managed nine shots in 8:01 of power play time over six power plays.  They got variety, too.  Three shots from Alex Ovechkin (one goal), two from Nicklas Backstrom, and single shots from Martin Erat, Troy Brouwer, Joel Ward (a goal), and John Carlson (a goal).

The odd part about the shots was the performance against the Islanders.  The Caps went 0-for-7 on their own power play but also allowed five shorthanded shots to the Isles.  That was not all.  The Caps allowed two shorthanded shots to both Winnipeg and New Jersey in the last two games of the week, making the power play shot totals an unlikely 20-9 for the Caps in the last three games of the week.

The week started poorly and ended well.  After allowing the Red Wings two power play goals in three opportunities, the Caps shut out the Islanders, Winnipeg, and New Jersey on nine chances to end the week.  The Caps did a good job limiting opportunities with opponents getting only 12 power play chances for the week.  Once confronted with shorthanded situations, the Caps shook off the poor performance against Detroit and held the last three opponents for the week to just 14 shots on goal in 14:57 of power play time.  Putting the week another way, Detroit’s Gustav Nyquist was 2-for-3 shooting against the Caps on the power play.  Washington was 15-for-15 stopping everyone else.

What the Caps could not replicate, though, was an ability to generate any threats when shorthanded.  The Caps did not have a shorthanded shot on goal for the week.

Win even-strength, win the week.  Tying even strength got the Caps to overtime against the Red Wings, where they won on a power play.  They lost the even-strength battle to the Islanders, then the game, by a 1-0 margin.  They then outscored Winnipeg and New Jersey by a combined 7-2 margin (two of the goals being empty netters).

Here is the thing, though.  The Caps were outshot for the week at even strength, 90-77.  The only game in which they won that battle came against the Devils by a 21-19 margin, the two goal difference a product of the two empty net goals at the end.

The Caps won each game, won each zone, and won the week in the circle.  Washington was especially successful in the defensive zone, winning it in all four games and going 47-for-73 for the week in that end (64.4 percent).  No Capital was under 50 percent in the defensive zone for the week, the team being led in draws taken by Nicklas Backstrom (11-for-14) and Jay Beagle (10-for-20).

Backstrom was a beast in the offensive end as well, taking 33 of the total of 83 offensive zone draws for the week.  He won 18 of them, a 54.6 percent winning percentage.

The second period, which has been kindest to the Caps on offense this season, saw but a single goal scored, that one by Joel Ward in the 6-5 overtime win over Detroit to open the week.

One thing the Caps did manage to do was extend the total of goals allowed within two minutes of scoring one.  In the third period of their win over the Red Wings the Caps allowed a goal by Justin Abdelkader 1:57 after Troy Brouwer scored for the Caps. It was the 24th time this season the Caps allowed a score less than two minutes after their own score.

The Caps were 3-1-0 for the week and take a 5-2-1 record in their last eight games into the Olympic break.  A good record to have, to be sure, but the Caps dug themselves a hole out of which they still need to climb.  While Alex Ovechkin, Nicklas Backstrom, John Carlson, Martin Erat, and Marcus Johansson are in Sochi, the rest of the club and the brain trust are going to have to find a way to parlay that record into something as good or better after the break when the schedule gets much tougher.  The Caps will have the second toughest schedule in the East after the break by one measure, the toughest overall by another.

Compounding the problem is the Caps’ regulation and overtime win (ROW) situation.  With 19 ROW, the Caps are seventh in the Metropolitan Division, 25th in the league.  Such heavy dependence on the trick shot phase of the game for points suggests that it will be that much more difficult for the Caps to climb into the playoff eligible portion of the standings when play resumes.

The Caps have 19 days between Week 19 and Week 20 of the season to get ready to make that climb.

Posted by The Peerless at 3:41 AM No comments: