The Peerless Prognosticator is ON THE AIR!!! -- Game 11: Capitals at Flames, October 26th

The Washington Capitals settle their season series with the Calgary Flames this evening when they visit the Scotiabank Silverdome for the first time since the 2010-2011 season.  That one was a pleasant visit for the Caps, spotting the Flames a 2-0 lead, then running off seven straight goals – six of them in the second period -- in a 7-2 win…

Cheerless!  What in the… you want to explain the camel?!?!

"Doncha get it, cuz?  Third game of a five-game road trip?" 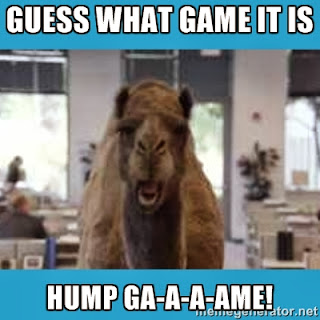 I guess.  In its own way, the notion seems to fit.  The Caps seem to be getting over the “hump” of their early season struggles, bringing a three-game winning streak and four wins in five games to Calgary.  On the other hand, the Flames have hit a rough patch.  After they opened the season with a 3-0-2 record, they took to the road for five games and lost four of them.  It has made for two very different five game pieces for Calgary:

Lee Stempniak (3-2-5) and Jiri Hudler (2-3-5) have done pretty well offensively over these last five games for the Flames.  After that, scoring drops off quickly.  Only Sean Monahan has as many as two goals, and only four other players have lit the lamp at all.  Monahan presents an interesting case for Calgary.  Taken sixth overall in the 2013 entry draft last summer, he has goals in six of the ten games his has played so far for the Flames.  He is currently tied for third among all rookies in points (ten) and is second in goals (six). His performance convinced Flames management to keep him for the rest of the season rather than return him to the Ottawa 67’s in Canadian junior hockey.

Meanwhile, the Flames’ defense and goaltending hardly shined over these last five games.  Joey MacDonald is 0-2-0, 3.05, .884 in two appearances, while Karri Ramo is 1-2-0, 4.05, .878 in three games.  It is not as if they faced a particularly heavy shot load.  In five games they faced a combined 152 shots in 295 minutes of work, about 31 shots per 60 minutes.  Those are middle-of-the-pack numbers in the league.  Here is how the two teams compare in their numbers to date… 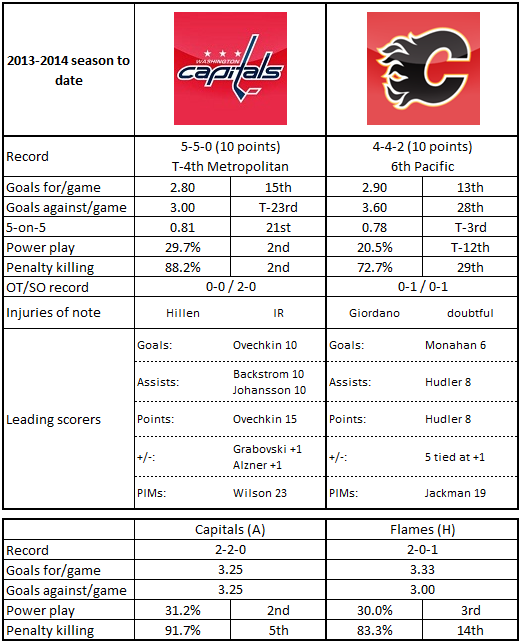 3.  Only the New York Rangers, who have yet to play in Madison Square Garden, have played fewer home games than the Flames so far.  Calgary has not lost in regulation time in any of their three games played at home.

4.  Mark Giordano missed the last two games for Calgary with an injury that has not been identified.  If he misses tonight’s game, the scoring load from the blue line likely falls to former Capital Dennis Wideman.  He is 0-2-2, minus-5 in his last four games.

5.  Mike Cammalleri, who missed the first meeting of the Caps and Flames, returned to the lineup last Monday after missing seven games with a hand injury.  He recorded a goal and an assist in a 3-2 win over the Los Angeles Kings, the Flames’ only win in their last five games.  Cammalleri is without a point in his last two contests.

1.  Alex Ovechkin is one of only four NHL player this season with ten or more shots in a game.  The others are Evander Kane, Henrik Zetterberg, and defenseman Jason Garrison.

2.  The Caps are the only team in the NHL with two players having 10 or more assists (Nicklas Backstrom and Marcus Johansson).

3.  Odd fact… the Caps rank only tied for 23rd in scoring defense, but they do not have a player among the top 40 in goals scored against/on ice.  John Carlson, who has been on ice for 12 goals against, is tied for 44th.  However, the Caps do have six players who have been on ice for ten or more goals against in ten games.

4.  Fans have taken note of Tom Wilson’s willingness to stand up for teammates, risking life and knuckles for the team.  However, the Caps are not among the fightingest teams in the league.  Only eight teams have recorded fewer fighting majors than the four the Caps.  Calgary being one of them (two), one would expect this to be a game without that brand of fan entertainment, even though there was one in the first game of this season series between the clubs (Wilson and Lance Bouma).

5.  Braden Holtby has finally dragged himself off the second page of the NHL.com goalie stats – 30th in goals against average (2.78) and 21st in save percentage (.919).

There might not be another Calgary player who represents the different five-game segments for the Flames than Curtis Glencross.  In his first five games he was 2-2-4, and Calgary was 3-0-2.  In his last five games he is without a point, is minus-3, and the Flames are 1-4-0.  It is no coincidence that he went scoreless on the five-game road trip.  He certainly is a player who likes his home cooking.  In 208 career games played on home ice he is 66-64-130, plus-36.  When packing a suitcase, he is 45-45-90, minus-29 in 200 games.  Maybe it’s the airline food.  He has only four career appearances against the Caps with a 2-0-2, even, scoring line.

Trivia Question – Among NHL rookie forwards, how many have at least ten shots on goal for the season without a goal?  If you said “two,” you win.  Of the 18 rookie forwards with ten or more shots on goal this season only Edmonton’s Mark Arcobello and Washington’s Tom Wilson are without a goal.  Arcobello has the charm of having recorded ten assists.  Wilson is, alas, without a point thus far.  Wilson topped the ten minute time on ice mark for the first time on Thursday against Edmonton (11:36), a product of his getting 1:17 in power play time.  It looks as if his responsibilities are slowly expanding, as will his opportunities to get that first goal.  The last time we made a pronosto like this it came true (Martin Erat getting a star against Columbus).  Here is another… Wilson gets his first NHL goal tonight.

1.  First five minutes.  After spending five games on the road and falling behind early in three of them, the Flames have perhaps settled into an unpleasant routine.  Only four teams have fewer first period goals than the Caps (five in ten games).  Calgary has not shown itself to be a successful come-from-behind team, either.

2.  Roll tide.  The Caps had only one player log more than 20 minutes of ice time in their 4-1 win over Edmonton.  The Caps could afford to do that because they took – and kept – a lead.  One begets the other, but what it means is that the Caps might be a bit fresher for this game as a result.  Now they have an opportunity to do it again.

Although the Caps have had their troubles going west over the years, Calgary has been something of an oasis.  Washington is 3-1-1 in their last five visits, outscoring the Flames by a 20-11 margin.  Given the history and the recent trends for the clubs, the Caps will get over the “hump,” so to speak.