The Peerless Prognosticator is ON THE AIR!!! -- Game 74: Blues at Capitals, March 26th

Both teams come into this game on a bit of a hot streak.  The Caps have won four of their last five contests, going 2-1-0 on their just-completed three-game road trip.  The Blues are on a three-game winning streak, all of the wins coming by way of shutout.

The author of those shutouts was goaltender Brian Elliott, who returned on March 19th after suffering a knee injury against the San Jose Sharks on February 22nd and missing ten games.  Elliott is perhaps the best goaltender in the league who gets almost no recognition.  Over five seasons in St. Louis, he is the only goaltender in the league with a goals against average under 2.10 (2.00), a save percentage of .925 or better (.925), and 25 or more shutouts (25).  He has been nothing short of spectacular in the 2016 portion of the season.  In 22 appearances he is 14-3-4, 1.73, .943, with four shutouts.  He also brings a personal eight-game winning streak into this game, if he gets the call (he shut out Vancouver on Friday night).  In ten career games against the Caps, Elliott is 6-2-0, 3.17, .886.

If it isn’t Elliott, it is likely to be Jake Allen in goal for the Blues.  Allen struggled in relief of Elliott, taking the loss in three consecutive games, including the game unfinished by Elliott against the Sharks on February 22nd.  He followed that up with six straight wins, but he struggled in his last two outings, allowing four goals on 17 shots in just 31 minutes of a 7-4 loss to Calgary on March 14, and then allowing five goals on 26 shots in a 6-4 loss to Edmonton on March 16th.  Allen has never faced the Capitals.

The Blues are not an especially prolific offensive team, tied for 19th in scoring offense in the league (2.57 goals per game).  They are not an especially balanced team, either.  Vladimir Tarasenko has been involved in just over a third of the 190 Blues’ goals scored this season (34-30-64) and almost half of their 46 power play goals (12-10-22).  Over the past four seasons, including this one, Tarasenko is one of 14 players to dress for at least 250 games and record at least 100 goals.  He notched his 100th career goal against Vancouver in a 3-0 win on March 19th.   In three career games against the Caps, Tarasenko is 1-1-2, plus-3.

Over the last five seasons, including this one, only nine defensemen have more points in the NHL than Kevin Shattenkirk (45-149-194 in 330 games).  This season, only five defensemen have more power play points than he does (23), and he has done it with at least 50 fewer power play minutes than any of the defensemen ranked ahead of him.  He comes into this game with points in six of his last nine games (3-5-8).  If there is an odd stat in his season line, especially given the team for which he plays, it is that he is a minus-16, by far the worst of his career (he was minus-11 in his rookie season in Colorado in 2010-2011 before being traded to St. Louis in mid-season).  In seven career games against the Caps, Shattenkirk is 1-4-5, plus-4. 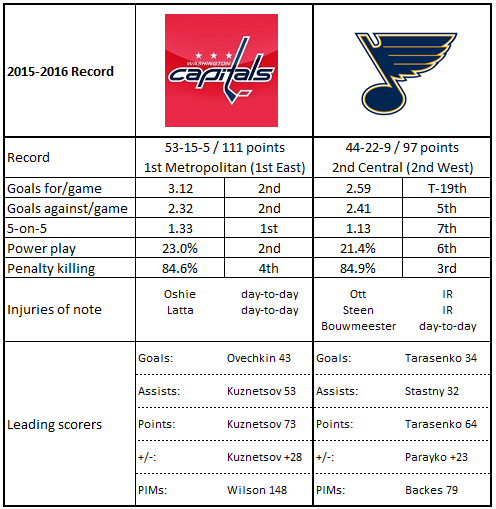 2.  No team has had fewer power play chances on the road this season than St. Louis (95).  Only once have they had more than four chances in a road game, that coming in Winnipeg against the Jets on October 18th.  They went 1-for-6 in that game, a 4-2 win.

2.  At the other end, the Caps are 26-9 in games settled by more than one goal, just one win short of the total number of wins posted by Vancouver and Toronto this season (27).

3.  John Carlson leads the team’s defensemen with 32 points, but if Matt Niskanen can post one more, and if Dmitry Orlov can get two more points, it would give the Caps three 30-point defensemen, matching the total they had last year and the most for the club in the post 2004-2005 lockout period.

5.  The Caps were improving at home, holding opponents to fewer than 50 shot attempts per 60 minutes at 5-on-5 on home ice for three straight games until they allowed 63.9/60 to Nashville in their last home contest.  Those three straight games under 50 attempts/60 minutes was pretty good in the context of the season in which they held opponents under 50 attempts/60 minutes only ten times overall (numbers from war-on-ice.com).

Of how many defensemen could it be said that a 5-24-29, plus-4, in 65 games is an “off” season?  For Alex Pietrangelo that might be the case.  The 29 points in 65 games (0.45 points per game) is the first time in six full seasons that he averaged less than half a point a game from the blue line.  Over those six full seasons, including this one, Pietrangelo ranks 12th overall among defensemen in points per game (0.56; minimum: 300 games).  And, he is a minutes-eater.  Only four defensemen in the league have logged more than 25 minutes in more games than Pietrangelo (48 games).  The 21:36 he had against Vancouver on Friday night was almost like a night off. It was his lowest ice time of the season.  He is 2-6-8, plus-10, over his last 13 contests, and in six career games against the Caps he has yet to record a point.

John Carlson returned to the lineup on Friday night after missing a month with a lower-body injury.  He did it in style, recording the first overtime goal of his career in the Caps’ 1-0 win over the New Jersey Devils.  His return comes just in time to give the Caps a healthy defense for their final stretch run before the playoffs.  And that cannot help but be a good thing, either.  The Caps, despite having the second best scoring offense in the league, does not get a lot of scoring from the back line.  Eight defensemen have points this season for the Caps (only St. Louis and the New York Rangers have fewer with points, seven apiece), and it is possible that no Capital defenseman will finish the season with as many as ten goals (Dmitry Orlov has eight).  Carlson’s seven goals in 48 games works out to a pace of 12 goals per 82 games, consistent with his last two seasons.  If he can be that threat from the blue line going forward, the Caps can become the formidable team they were over their first 50 games.  In eight career games against the Blues, Carlson is 1-3-4, even.

St. Louis is not an easy team to play against.  No Ken Hitchcock team is.  His teams will make opponents work for every inch over the 200 foot ice surface.  It puts a premium on the seemingly contradictory elements of quickness and patience.  The Caps will have to be disciplined and aware of hard-closing defenders to make quick, crisp passes, but they will have to be patient against a club that allows the eighth-fewest shot attempts at 5-on-5 in the league.  Close games have been a staple for the Caps, though.  Eight of their 12 games in March were one-goal decisions, and they are 6-1-1 in those contests.  This could be another in that string.

Posted by The Peerless at 2:08 AM No comments: