The Peerless Prognosticator is ON THE AIR!!! -- Game 9: Rangers at Capitals, October 18th

The Washington Capitals conclude their three-game home stand on Friday night when the New York Rangers come to town in a Metropolitan Division matchup.  The Caps will be out to end the home stand on a winning note after splitting their first two games, while the Rangers will be playing the back half of a back-to-back set of road games, arriving in DC after visiting the New Jersey Devils on Thursday night.

The Rangers have finally embraced the “R” word – “rebuild.”  It was a long time in coming.  After reaching the Stanley Cup final in 2013-2014, they lost in the conference final the following season and won only one series over the next two postseasons.  It all came crashing down in 2017-2018, when the Rangers went 34-39-9, finished last in the Metropolitan Division and missed the postseason after a string of seven straight and 11 of 12 seasons making the playoffs.  It was almost as bad last season, the Rangers finishing seventh in the division, out of the postseason, with a 32-36-14 record.

And now, the Rangers are going with youth.  Of the 19 skaters to dress for the Blueshirts over three games, ten are 25 years old or younger.  Their youngest player is last summer’s second overall draft pick, right winger Kaapo Kakko, at the moment the Rangers’ only player born in the 21st century (February 13, 2001).  He is expected to inject some high-octane offense into the Ranger lineup, based on his recent history – 22 goals in 45 games with TPS in the Finnish Elite League, 18 goals in 43 games of international play last year.  It took Kakko three games to get his first NHL goal, the only Ranger goal last Saturday in a 4-1 loss to the Edmonton Oilers.  It won’t be his last one, if history is an indication.  This will be Kakko’s first appearance against the Caps.

Five of the seven defensemen to dress for the Rangers so far are 25 or younger, but not all of them are unknown quantities.  Jacob Trouba (25 years old) spent six seasons with the Winnipeg Jets before he was traded to the Rangers last June for Neal Pionk and a first round draft pick.  A month later he signed a seven-year/$56 million contract that runs through the 2025-2026 season.  He is the defenseman around which the Rangers expect to build a blue line.  It seems a solid investment, based on performance.  He departed Winnipeg as the third leading goal scorer among defensemen in franchise history (42) and third in total points (179).  Trouba is tenth in his freshman class of 2013-2014 in goals among defensemen (42) and sixth in that class in points (179).  He started quickly with his new team, going 1-2-3 on Opening Night in his first game as a Ranger, a 6-4 win over his former club, the Winnipeg Jets.  In seven career games against Washington, Trouba is 0-1-1, minus-1.

On rebuilding teams, there is often a changing of the guard, and it is happening in goal for the Rangers.  Henrik Lundqvist, an all but certain Hall of Famer, is now the third oldest goalie in the league (only Ryan Miller and Craig Anderson are older).  At the other end, number one goalie in waiting at the moment Alexandar Georgiev is the fifth youngest goalie to dress so far this season.  The 37-year old Lundqvist, who put together seven straight seasons of save percentages over .920 from 2009-2010 through 2015-2016, Has not been over .915 in any of the last four seasons, including two games to start this season.  Last season, Lundqvist became the 11th goalie in league history to log more than 50,000 career minutes in goal (50,340), and sometime this season he will become the eighth goalie in league history to face at least 25,000 shots (he is 200 short).  Lundqvist is 21-12-7, 2.77, .906, with four shutouts in his career against the Caps.

Meanwhile, at the other end of the tenure spectrum, Georgiev is in his third season with the Rangers.  An undrafted goalie, he won a spot with the Rangers after the club invited him to development camp in 2017.  His career numbers are decent, if unspectacular for a backup: 19-17-5, 2.92, .916, with two shutouts in 44 career games.  One set of numbers from last year, though, was telling.  He got 30 starts for the Rangers and 33 appearances overall.  It would not be the biggest surprise if he at least matched those numbers this year.  Georgiev is 0-2-1, 4.06, .875 in three career appearances against Washington. 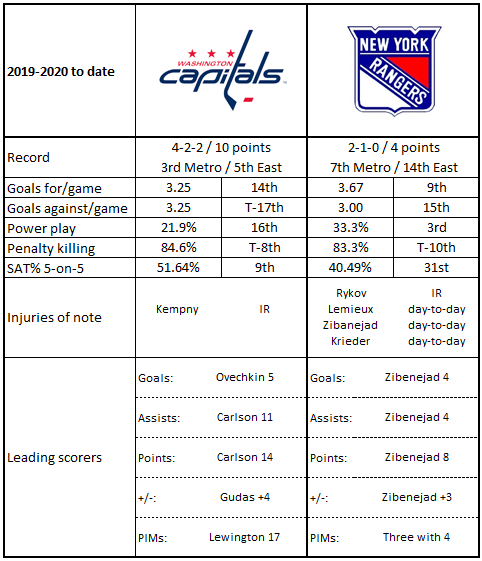 1.  The Rangers are the second straight team that the Caps are catching playing the back half of a back-to-back set of games.

2.  New York will be the last of the 31 teams to play their fourth game of the season when they face the New Jersey Devils on Thursday night.

3.  An odd lineup management for the Rangers so far is having dressed seven defensemen for each of their first three games.  Six of them have points; only Adam Fox is without one.

4.  It’s early, especially for the Rangers, but only Tampa Bay has a better shooting percentage among Eastern Conference teams (14.9) than the Rangers (13.3).

5.  Despite having played only three games through Wednesday night, the Rangers have the second-worst shot attempts differential at 5-on-5 in the league (minus47); only the Islanders are worse (minus-64 in six games).

1.  The Caps dodged a bullet when they beat Toronto on Wednesday night.  They avoided going winless at home in their first four games for the first time since opening the 1982-1983 home portion of the season 0-3 with one tie.  The last and only time they lost their first four games on home ice was in 1975-1976, their second season and a year in which they finished 11-59-10 overall and won only six home games all season.

2.  Through Wednesday’s games, John Carlson was the only defenseman ranked in the top-ten in points (third with 14).  He had three goals and 11 assists, while the other six defensemen to dress for the Caps so far had a total of one goal (Dmitry Orlov) and seven assists.

3.  Orlov has been skating in some bad luck (or was making or was witness to some glaring errors).  His on-ice shot attempts-for percentage at 5-on-5 was 54.27, but he was a team-worst minus-6 among all skaters.

4.   The Caps have dressed 20 skaters so far this season.  Only five are “plus” players through Wednesday’s games.  Nic Dowd (plus-1 in five games) and Garnet Hathaway (plus-2 in eight games) are the only forwards.

In the Rangers’ rush to get younger, one should not lose sight of the fact that their big free agent acquisition – left winger Artemi Panarin – will only turn 28 years old at the end of this month.  He is there to score goals.  Over his first four seasons, his 116 goals (with Chicago and Columbus) was more goals scored than any Ranger had over the last five seasons (Chris Kreider had 114 over those five seasons).  Panarin’s goal production should be a given, based on his first four seasons, over which he posted 30, 31, 27, and 28 goals last season.  But his setting up teammates should not be underrated, either.  His 204 assists over four seasons coming into this one was tied for 11th (with Evgeny Kuznetsov) in the league, and he was one of only five wingers among the top dozen in that category.  Panarin goes into tonight’s game against New Jersey with goals in two of his first three games as a Ranger, and he is 5-4-9, plus-4, in 12 career games against the Capitals.

After spending the first three games of the season on suspension, Evgeny Kuznetsov has points in each of the five games for which he has dressed so far (3-3-6).  But the Caps are 2-2-1 in those games.  Part of the problem is his personal shot attempts-for percentage at 5-on-5.  When he is on ice, the Caps are at 37.50 percent, his being the second worst such number on the club (Nic Dowd is at 30.77 percent).  He has been on ice for six goals against in five games, sixth-most among the 13 forwards to have dressed so far, despite his playing three fewer games than each of the forwards on ice for more goals against.  He is hardly alone in having night-and-day issues in the ends (Alex Ovechkin and Nicklas Backstrom lead all forwards in points but have the worst plus-minus numbers in that group), but he is part of a problem that needs correcting.  Hockey is a 60-minute game, but it is also a 200-foot game, and even if Kuznetsov is not going to be on short lists for a Selke Trophy as top defensive forward, he – and the Caps in general – need to display better balance than they have so far, especially considering that the Caps are under 50 percent in shot attempts-for percentage in each of the last four games.  Kuznetsov is 6-13-19, plus-7, in 20 career games against the Rangers.

The Caps are getting a young Ranger team coming off a game the previous night against another divisional rival.  The usual factors would seem to apply here.  Pressure early, frustrate the younger opponent, don’t let them get too confident in themselves.  One thing to look for here will be how the Caps defend the Rangers.  Washington has yet to hold an opponent under three goals in four games on home ice so far.  This game should break the string.