The Peerless Prognosticator is ON THE AIR!!! -- Caps vs. Islanders: October 30th

The Peerless Prognosticator is on the AIR!!!

Tonight the Capitals return home to finish up a back-to-back, this game against the New York islanders. The Caps defeated a game Islander squad last Saturday on Long Island, 3-2, in overtime. It is a surprisingly competitive team, given the predictions for it, in that they have played in seven one-goal games so far (1-1-5). They have that plucky, hard working ethic that characterized the Caps of a few years back when they were in the midst of hard times themselves. It is a tribute to…

Excuse me, can I help you? You looked a bit dazed.

And where are you from?

“I just came from an island… the Island of Dr. Garth Snow…”

“…of Dr. Garth Snow, that’s right. The things they’re doing on that island."

“Yes, a Witt-debeest. And then there is combination of a sloth and a rhinoceros that they call…”

Calm yourself. Tell me what you’ve seen.

“It’s something they put together from a goalie mask, a pair of linebacker shoulder pads, and parts that I don’t even know where they came from.”

“It looks like a goalie, but not a very good one, and always hurt.”

Who is this fiend you call Dr. Garth Snow?

Well, what Snow has put together so far and what he is called upon to manage might just have the makings of a pretty good team down the road, although for now, things are not going well… 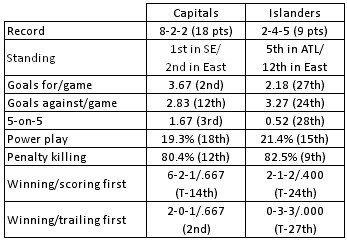 First, there are the kids – John Tavares, Kyle Okposo, and Josh Bailey, who are a combined 7-12-19 through 11 games, not bad for a trio whose oldest member (Okposo) won’t turn 22 until next April.

There is what, for lack of a better term, might be considered the “mid-range” prospects – players who have entered or are entering their mid-20’s who have not yet reached their prime – Jeff Tambellini (three goals in his last two games after being a scratch in five straight), Jack Hillen (a defenseman who got 40 games worth of experience last year with the Islanders), Blake Comeau (a winger whose production was virtually a carbon copy of Bailey’s last year), and Frans Nielsen (who has appeared in the last five games after arthroscopic surgery on his knee). None of this quartet has yet seen his 26th birthday.

There are guys here, too, who are the good soldiers. They are the veterans who almost certainly will not be Islanders when the club returns to competitiveness. Doug Weight is in his second year with the Islanders, and it’s been difficult. Last year, he was held to 53 games with knee and leg injuries. This year, it’s been a case of swine flu that has limited him to six games. He did return to the lineup in the Islanders’ last game – a 3-1 win over the Rangers. He was out for last Saturday’s game against the Caps, but he was 1-1-2 in three games against Washington with the Isles last year.

Richard Park is one of those players who you might think has been around forever, and in fact he has been in the league since 1994-1995 with six teams. He is also only 33 years old, and he is in his fourth year with the Islanders. In the last three years on the Island, he is 5-3-8, plus-2 in 13 games against the Caps. As much as anyone on the club, attention has to be paid to him.

Then there is the enigma that is Brendan Witt. Back in 2005, Witt – who had once been a co-captain for the Capitals – expressed a desire to be traded, not wanting to be a part of the rebuild that was just getting underway. He was sent to Nashville later that season, in time to join the Predators for a playoff appearance (they were eliminated in the first round). Then he moved to the Islanders for the 2006-2007 season, where he reached the playoffs once more (also eliminated in the first round). Since then, though, it’s been rough. His fortunes and the Islanders’ have marched in lock-step. While the Isles were going 35-38-9 in 2007-2008, Witt was limited to 59 games with ankle and knee injuries. Last year, the Isles were going 26-47-9, and Witt was struggling along with the team, finishing dead last in plus-minus among 885 skaters in the NHL (minus-34). He does, however, provide a physical presence and a degree of enforcement against other teams taking liberties with the young guys.

Under the Islanders faithful alternating of goaltenders, Martin Biron will get the call against the Caps. Biron has not yet won a game this year (0-3-2), and his other numbers are grim as well (3.45 GAA, .891 save percentage). Biron spent the past two and a half years with the Flyers, and in that time he was 1-2-2, 2.96, .905 against the Caps in the regular season. He did have that playoff win in a seven game playoff series in 2008 that Caps fans will remember. Biron has not face the Caps this year, but his last three games have been a struggle – 0-2-1, 3.96, .884.

An odd thing about the Islanders… in six of the 11 games they’ve played thus far they have allowed precisely three goals (not including the trick shot competition). And that’s not all. In all of them, the games went to extra time. The Islanders are 1-0-5 in those games. This is another of those games that on paper the Caps should win handily, certainly by scoring more than three goals. But if paper was the standard, we could cut to the chase and a Pittsburgh-Washington Eastern Conference final. But the fun is in the journey and in seeing what adventures lay along the way. Right, Prendick?

"Not me… I’m done with adventures." 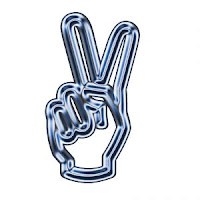 They gotta stop doing this.

Another run out to a lead, then hang on for dear life at the end sort of game against a team they should have squashed like a bug. But those are our Cappies these days, winners of a 4-3 decision last night.

Alex Ovechkin got his points early (2-1-3 in the first 25 minutes), Semyon Varlamov got his saves late (17 on 20 shots in the third period).

For all the teeth knashing that might have gone on in the third period (and Coach Bruce Boudreau had a look about him that would melt iron in the post game), the game turned on a five minute sequence in the first period. It started with a simple play that the Caps haven’t been getting right much lately. With Jim Slater in the box for the Thrashers after a hooking penalty, Brendan Morrison won a faceoff over to Brooks Laich along the boards. Laich sent the puck back to Mike Green, who forwarded it to Alex Ovechkin on the left point. Ovechkin wired it past goalie Ondrej Pavelec before he (or Marty Reasoner, who had that part of the ice to cover) could react, and the Caps had the lead.

Then, Jim Slater was hooked down as he was crossing the Caps’ blue line on a breakaway. A penalty shot was called, and Slater had his penalty shot attempt swallowed up by Varlamov. A minute later, Nicklas Backstrom found Ovechkin streaking down the middle, and Ovechkin undressed Pavelec with a leg-kick-wrist shot over the glove hand and just under the crossbar. What could have been a 1-1 game was 2-0, and with leading goal scorer Ilya Kovalchuk out of the lineup, it was a deep hole for the Thrashers to climb out of.

- We noted that the Caps scored a goal on a play that they hadn’t been getting right lately. Well, Brendan Morrison taking an offensive draw on a power play is a signal of a lingering problem. Nicklas Backstrom hasn’t finished a game on the plus side of faceoffs since October 10th against Detroit. Since then he has been over 40 percent only once and under 30 percent three times (including last night) in six games. Perhaps ironically, Backstrom was on the plus side in the offensive zone last night (4-for-7), while Morrison was not (4-for-9).

- Having said that about Backstrom, we have to point this out, too. His assist to Ovechkin was magnificent. From the top of the circles in his own zone, he lofted a saucer pass out and over Maxim Afinogenov’s stick between the Caps’ blue line and the red line, right onto Ovechkin’s stick blade just outside the Thrashers’ blue line. There aren’t three people on the planet who make that pass. Backstrom seems to make those saucer passes three times a game (though not that spectacularly).

- Brooks Laich: three assists. And yes, he has done it before, the last time being last March 27th against Tampa Bay.

- That’s two straight games the Caps have surrendered 20 shots on goal in the third period. That’s not something you’d like to see become a habit.

- Two minor penalties speak to the kind of road-game discipline you’d like to see. The two shorthanded situations faced is the low for the year so far.

- Tomas Fleischmann might not have gotten on the board, scoring-wise, but seven shot attempts, a hit, and splitting two faceoffs in 16 minutes of ice time was indicative that he’s ready to go.

- It was good to see Mike Knuble break the five game goal-less streak, even if it was an empty netter. The odd part, though, is that his 15:11 in ice time was his low for the year.

- Ice time was distributed rather evenly. Only three Caps had over 20 minutes, none of them forwards, and only Tyler Sloan skated for fewer than ten minutes.

All-in-all, it was another successful, if exasperating result. But, to wear the grooves on this record down some more – two points is two points, and they sure beat the alternative.
Posted by The Peerless at 6:41 AM No comments: