Washington Capitals: That Was The Week That Was -- Week 27

Week 27, the last week of the regular season in the NHL, was a good one for the Washington Capitals.  They completed their 16th winning week of the season and finished the regular season with only five losing weeks in 27.  It suggested a kind of consistency or, dare we say it, grit, that has often been lacking in previous editions of the franchise. 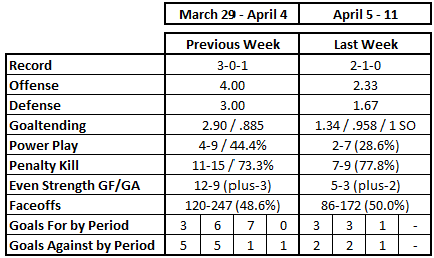 The two wins in Week 27 allowed the Caps to finish the regular season with 45 wins, the seventh time in 40 seasons that the Caps reached that mark in wins.  The 101-point season was their eighth 100-point season in franchise history and the fourth in ten seasons since the 2004-2005 lockout.  While 100 points is not quite what it used to be, the NHL now characterized by the frequent three-point game resulting from overtimes and shootouts, it was still a respectable end to a respectable season.  A welcome change from the way the 2013-2014 regular season ended, with wheeze – a 1-0 Gimmick loss in the last game of a lost season.

It was a comparatively light week on offense.  Only seven goals scored, no player with more than one.  The good part of that is that there were seven different goal scorers.  Call it balance of a sort.  Two of them had special meaning for the players involved.  Matt Niskanen scored against Boston, ending a 37-game streak without having scored a goal in the month of April, dating back to April 2008.  Stan Galiev scored a late goal against the Rangers in the last game of the week and the season, his first goal in his NHL career.  In a way, it was symbolic.  The first goal of the Caps’ season was the first of the player’s career – Andre Burakovsky against Montreal back on Opening Night.  The last one was another first-goal. An optimistic fan would think that a good sign for the future.

Overall, Nicklas Backstrom led the week in points (0-3-3) and finished the regular season as the league leader in assists.  It was his fourth 60-assist season and second in a row.  Since Backstrom came into the league, only Henrik Sedin has more 60-assist seasons (five).  Only Sedin (472) and Joe Thornton (451) have more total assists in that period than Backstrom (427).

The Caps managed to shave more than a third of a goal per game off their scoring defense from last season (from 2.79 to 2.44).  They cut their shots allowed per game by almost five (from 33.5 to 28.9).  In Week 27 the scoring defense was there – five goals allowed in three games, one of them an empty-netter – but the shots allowed were on the high side (32.3 per game).  The problem there was in the second periods of games. The Caps allowed 38 shots in the middle periods of the three games, 16 of them to the Detroit Red Wings in the game to open the week.

The Caps had a decent week in terms of their underlying numbers.  At 5-on-5 overall, their Corsi-for and Fenwick-for percentages were 50.2 and 51.3, respectively.  Those numbers might sound a little better than they were since the Corsi and Fenwick plus-minus values were plus-1 and plus 5, respectively.

The numbers were better in close score situations, the Corsi-for and Fenwick-for percentages being 53.8 and 58.6, respectively.  The Corsi and Fenwick plus-minus values were correspondingly better – plus-6 and plus-10, respectively.  The Caps were on the good side of 50 percent and the plus-minus divide in all three games in close score situations.

Braden Holtby ended the regular season with a flourish.  Not even the three-goals-allowed performance on Saturday could cause much of a blemish to either the week or the season.  For the season, Holtby tied a franchise record for games played (73, with Olaf Kolzig in 1999-2000).  He tied Kolzig for the team record in wins for a season (41).  Holtby set a team record for save percentage in a season (minimum: 40 games played).  His .923 save percentage topped the .920 set by Kolzig in 1997-1998.  He posted the second lowest goals against average in a season in team history (minimum: 40 games played) with his 2.22 GAA.  Only Kolzig’s 2.20 GAA in 1997-1998 was lower.  Holtby’s 4,247 minutes is the third-highest total in team history.

For the season he finished among the league leaders in a number of categories:
His performance in Week 27 was among his better overall weeks.  He allowed only two even strength goals for the week, both against the New York Rangers, on his way to posting a .972 even strength save percentage for the week.  He is heading into the post-season right where his season numbers suggest he should be.  Holtby was 9-2-1, 2.25, .923, with two shutouts over his last 13 appearances.

As has been the case so often this season, the Caps power play was effective (two goals) and efficient (28.6 percent conversion), but lacked frequency (seven instances in three games).  Washington finished 23rd in the league in total power play opportunities for the season, meaning that despite finishing with the league’s most efficient power play (25.3 percent), they were tied for second in goals – 60, with Philadelphia, ten behind Detroit, who had 57 more opportunities than the Caps.

The Caps made the best of scarce opportunities in Week 27.  They converted twice in seven opportunities, scoring their two goals on seven shots in just 10:46 of power play time for the week.  It was typical.  The Caps finished the season with total power play time (371:06) that was the third-lowest number in the league. Only Boston (368:31) and New Jersey (356:44) spent less time on the power play.  The low power play ice time number made the Caps the most efficient team in the league in another respect.  They average one power play goal for every 6:11 of power play time, far better than the second-place team in this regard (Detroit; one goal per 6:43 in power play ice time).

If there was one thing that killed the Caps’ playoff chances in 2013-2014, it was their ability to take advantage at 5-on-5.  Their goals-for/goals-against ratio of 0.90 was 23rd in the league.  Every team below them in the rankings missed the playoffs and earned fewer standings points than the Caps.  This season the Caps made progress.  They were not a dominating team at 5-on-5, but they did score more than they gave up, their 1.08 goals-for/goals-against ratio finishing tied for 12th in the league (coincidentally, with their first-round playoff opponent, the New York Islanders).

In Week 27 the Caps had a pretty good week.  Discounting the empty netter scored by the Rangers in their 4-2 win, the Caps were five to the good and two to the bad in goals.  It was better than their shot advantage (76-71, not counting the empty net goal).  The promising part of that was the Caps’ even strength shot advantage early.  They out-shot their opponents at even strength by a 34-24 margin in the first periods of games.

As is the case with a 50 percent week, it was not good, and it was not bad, at least at the top end level.  Drilling down, the Caps were just one over 50 percent in the offensive zone (29-for-57), and the best of that was among players from whom not a lot of offense is expected or who do not take a lot of draws.  Brooks Laich, Michael Latta, Joel Ward, and Curtis Glencross were a combined 12-for-16 (75.0 percent).  Not seeing scoring line centers there.

The Caps did worse overall in the defensive zone (30-for-63), and that is attributed to, in part, the guys who take few draws or are expected to contribute more on defense.  Laich, Latta, and Joel Ward were a combined 10-for-26 (38.5 percent).

Overall, the Caps finished 11th in the league with a 51.2 percent winning percentage.  It was an improvement over last season’s 23rd-place ranking (48.4 percent). 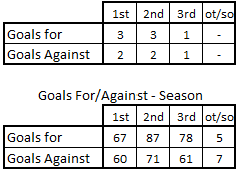 With the light scoring week, both for and against, there was not much to take from goals scored by period.  The Caps had an advantage in the first two periods, a product of scoring first in their first two games of the week (in fact, getting out to multi-goal leads), one in the first period of their 2-1 win over Detroit and two in their 3-0 win over Boston.  That was turned against them against the Rangers, who scored a pair of first period goals against the Caps in what would be Washington’s only loss for the week.

The week-by-week record of the Caps is perhaps their best argument for a long playoff run.  This is not a team given to streaks, but rather one that doggedly grinds out more wins than losses on a consistent basis.  The disappointment of years past in the post season has been the Caps ability to take a lead in series, but an inability to close the deal.  The 27-week performance of this team suggests perhaps a different profile.

As for Week 27, it was somewhat typical of so many weeks this season – an efficient power play that gets few opportunities to shine, a penalty kill that is middle-of-the road, excellent goaltending, decent possession numbers.  Most important, there was the winning, and 16 winning weeks with only five losing weeks in a 27-week season is a good way to be going into the post season.

Posted by The Peerless at 11:26 AM No comments: