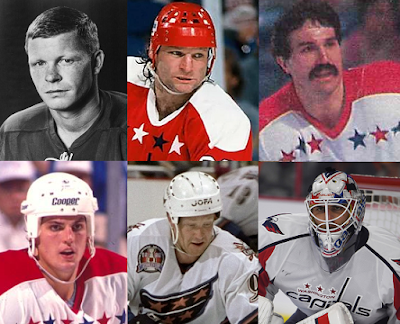 The Pause continues, and it continues to provide us an opportunity to take a look back at the Washington Capitals’ “All Alphabet Team” we posted in 2014.  Today, we are up to the “All-H Team.”  Back in 2014, that "All-H Team" was:

This is the second of the original All-Alphabet Teams whose five skaters pre-date the 2004-2005 lockout year (All-D Team was the other).  As a group, the five skaters of the original team were a diverse lot.  There was the journeyman at the end of a career in which he played for six teams over 12 seasons, his season and change in Washington being his last NHL stop (Hextall).  There was the feisty forward who has already become a legend of sorts in Quebec, who came to Washington (we won’t talk about the draft pick going to Quebec being used to draft Joe Sakic), eventually ascended to the team captaincy, and had a career worthy of having his number retired (Hunter).  There was the player who spent barely a full season in Washington, but who stayed long enough to post a career high in goals for a season (Houston, who had 25 goals in 1982-1983).  There was the defenseman who, by the time his career ended with the Caps after the 1993-1994 season, was the career leader among Caps defenseman at that time in goals (149), power play goals (50), game-winning goals (24), and had – still has, in fact – the single season team record for goals by a defenseman (Hatcher, who had 34 goals in 1992-1993).  There was the defenseman signed as a free agent on the back-half/bounce around the league portion of a hall of fame career (the Caps were the sixth of eight teams for which he would play) who showed glimpses of his earlier glory but could not push the Caps to a title in their first Stanley Cup final appearance (Housley).

Given this group and its diversity, not to mention its somewhat uneven performance, there might be an opportunity for a replacement or two on the All-H Team roster of skaters.  We can dispose of the matter of defensemen right away.  There has been one defenseman who dressed for the Caps whose last name start with the letter “H” since the original team was published in 2014 – Jack Hillen.  His tenure in Washington actually straddles that publication, having arrived in 2012-2013 as a free agent from Nashville and playing for the Caps into the 2014-2015 season, during which he was traded to Carolina.  His five points in 35 games (all assists) for the Caps in that 2014-2015 season do not merit replacing either Hatcher or Housley.

At forward, we might consider if either Carl Hagelin or Garnet Hathaway are worthy replacements for either Dennis Hextall or Ken Houston.  Hagelin is a particularly interesting case.  He has the reputation of being more of a defensive player, very adept in penalty killing, but he has been “sneaky” productive for the Caps in his 78 games with the club, going 11-25-36, almost a half-point per game scoring pace.  And, five of his 11 goals for the club have been either game-winners (three) or shorthanded (two, neither of which was a game-winner).  In the matter of the left wingers, it is not really a close call between Hextall (3-10-13 in 41 games with the Caps) and Hagelin.  Hextall takes a seat in favor of Hagelin.

On the other wing, it is a closer call, but not particularly close.  Hathaway has been the player as advertised when he was signed as a free agent by the Caps last summer – a decent two-way player who plays with an edge.  Nine goals and 16 points, to go along with 79 penalty minutes in 66 games attests to that.  On the other hand, Ken Houston had 25 goals and 39 points in 75 games with the Caps and had 97 penalty minutes of his own in those 75 games.  It is not a landslide decision, but we would be inclined for the moment to keep Houston on the All-H Team roster.

In goal, circumstances make the decision even easier.  There is no goaltender having dressed for the Caps whose last name starts with “H” since the roster was published in 2014 other than Braden Holtby.  His before and after numbers using that 2014 roster publication as a baseline are similar.  His 60-31-8/2.60/.919 record, with 11 shutouts, merited his selection on the original roster.  His 222-91-38/2.52/.915 record, with 24 shutouts, not to mention a Stanley Cup, supports keeping him there, the absence of possible replacements notwithstanding.

The 2014 version of the “All-H Team” is an odd mix of a group.  A defenseman might be the best offensive player (Hatcher), and the best defender of the revised group might be a forward (Hagelin).  It is a team that can get under the skin of opponents (Hunter, and even Hatcher, who had 999 penalty minutes as a Cap) and has considerable experience, even if most of it among some players came before arriving in Washington (Houston, Housley).  And, it is anchored by arguably the best goalie in team history (Holtby).  In many respects, this team resembles a lot of teams the early competitive years of the franchise – a decent offensive punch and hard to play against.