Today in Caps History and the Other Side of a Trade

We were flipping through the Caps’ media guide this morning, curious to see what, if anything, occurred on this date in Caps history. Now that the Tomas Kaberle episode has run its course (for the moment), this is what passes for excitement on the hockey front.

What we learned was that on this date 31 years ago, the Capitals traded a third-round pick in the 1981 draft to the Philadelphia Flyers for goaltender Wayne Stephenson, who passed away earlier this summer. But what caught our eye was the player the Flyers chose with that pick – Barry Tabobondung. Hockey has more than its share of interesting names, and this one seems to be among the more interesting, so we looked it up. And what we found at the hockeydraftcentral.com web site was quite a story.

First, there was the matter of his feistiness. Playing for Oshawa in the OMJHL in 1980-1981 leading up to the 1981 draft (he was eligible in 1980 but was not selected), he amassed 320 minutes in penalties in 61 games after moving from defense to left wing. Yet, he still managed 18 goals. It was a combination that led the Flyers to take him with the 47th overall pick in the 1981 draft (only seven picks after Chris Chelios as it turns out). But being picked did not appear to be enough for the young Mr. Tabobondung. Hockey Draft Central picks it up from here…


“Tabobondung attended the 1981 NHL Entry Draft in Montreal, marking only the second year that junior players had attended the draft in large numbers beyond those likely to be taken in the first round. Tabobondung was so excited to be chosen in the third round that he jumped over the front row of seats at the Montreal Forum in order to greet Flyers officials at their draft table. Unfortunately, in one of the draft's most embarrassing moments ever, Tabobondung's foot got stuck in a folding seat, and arena attendants, along with Flyers special-assignments coach Joe Watson, needed at least five minutes in order to get Tabobondung out of the seat. One of the arena attendants had to unscrew a portion of the folding seat to free the player.

“As Tabobondung was being extracted from the seat, NHL executive vice-president Brian O'Neill, who was running the draft from the main podium, joked the Flyers could at least be sure that Tabobondung would be available for all of their games in Montreal. Flyers coach Pat Quinn responded to O'Neill's joke by saying "We gotta play the kid. Obviously, we can't afford to have him sit." Asked about the incident, Tabobondung jokingly told Jay Greenburg of The Hockey News that he wasn't even embarrassed and was glad he was able to "do something to get the attention off the first-rounders."

Hard to imagine something like that taking place at a draft these days. Unfortunately, that was likely his high-water mark as an NHL prospect. Tabobondung bounced around after that, playing for the Maine Mariners of the AHL, the Peoria Prancers of the IHL, and doing stints with two teams in Erie – the Golden Blades of the ACHL (he was the league’s most valuable player in 1984-1985) and the Panthers of the ECHL. He never played a game in the NHL.

He returned to his hometown of Parry Sound, Ontario (hometown to another player a bit more famous – Bobby Orr), where he coached hockey for kids and was active in the First Nations community (Tabobondung was a full-blooded Ojibway). Unfortunately, though, his life would come to an untimely end in July 2000. Again, from Hockey Draft Central…


“[He] died in a vehicular accident at age 39 in native Wasausking First Nation neighborhood. The accident happened when Tabobondung and his 8-year-old son, Thomas, were riding in the cab of a road grader in which Tabobondung was working. Tommy Tabobondung fell out of the vehicle, and Barry jumped out of the cab to try to save his son from being run over. Barry and Thomas both got caught under the road grader's rear tires. Barry Tabobondung was taken to the West Parry Sound Health Center, where he was pronounced dead. His death wasn't in vain. Police on the scene said there was no doubt Barry Tabobodung managed to save his son's life, and the young boy came through the accident with only a broken leg.”

He seems to have been quite a fellow.
Posted by The Peerless at 11:33 AM 1 comment: 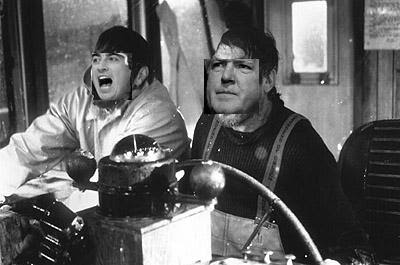 The clouds part on the no trade clause, a sliver of sunlight peeks through. But then…

Captain Billy Burke: She's not gonna let us out.

BB: No school for it. Never was.

BK: Skip, we made the right call.

BK: We were so close.

Posted by The Peerless at 11:24 AM No comments: