The Peerless Prognosticator is ON THE AIR!!! -- Game 33: Capitals at Hurricanes, December 21st

The Washington Capitals take the ice for the last game before Christmas when they visit the Carolina Hurricanes on Monday night.  The Caps, fresh off two thrilling comeback victories, will be looking to head into the five-day holiday break on an up note by extending their winning streak to six games.

Offense has not been a problem for the Caps over the last week, having scored 18 goals in their last four games.  This will test their stamina, though, insofar as it will be their fifth game over an eight day period.

The Hurricanes have been more or less treading water since Thanksgiving, posting a record of 5-5-1 in 11 games since Turkey Day.  Offense has not been a problem for the Hurricanes in that stretch.  They average 3.00 goals per game in those 11 contests, and their power play went 10-for-34 (29.4 percent).   Defense, on the other hand, gave it all back and then some.  In those last 11 games the Hurricanes have allowed an average of 3.36 goals per game, and their penalty kill is just 23-for-30 (76.7 percent).

It would be hard to find a player hotter than Jeff Skinner at the moment.  In the 11 games played by Carolina since Thanksgiving, Skinner is 9-2-11, plus-1, and has a pair of hat tricks, one against the Anaheim Ducks on December 11th and another against the Philadelphia Flyers on December 15th.  Skinner, who despite being in his sixth NHL season is still only 23 years old, is looking to rebound from a disappointing 2014-2015 season in which he had only 18 goals in 77 games.  He has 14 in 33 games to lead Carolina.  Skinner is 9-11-20, even, in 26 career games against the Caps.  Oh, and one tantrum…

Victor Rask had a nice rookie season for the Hurricanes in 2014-2015, going 11-22-33 in 80 games.  He is on a pace to improve upon that this season.  Rask is 9-14-23 in 33 games so far this season, including a 3-7-10 run in 11 games since Thanksgiving, second best on the club in total scoring.  Rask’s improvement this season has come in his shooting efficiency, which stands at 12.7 percent at the moment, well above the 6.4 percent shooting with which he finished last year.  He has also shown himself to be a reliable power play contributor, second on the club with 11 power play points.  He has a pair of assists in five career games against Washington.

When both of your goalies are on the wrong side of .900 in save percentage, your team is going to struggle.  It is not as if Cam Ward and Eddie Lack are facing a ton of shots, either.  Carolina has given up the fewest shots per game in the league (26.2), but there are there are Ward (.899) and Lack (.876) struggling in net.  Carolina is the only team in the league having two goaltenders with more than 500 minutes of ice time and save percentages under .900.  Among 47 goalies playing at least 500 minutes this season, Ward and Lack rank 41st and 46th in save percentage, respectively.  Ward is 16-14-4, 2.64, .917, with four shutouts in 35 career appearances against the Caps, while Lack has one career appearance against the Caps, allowing four goals on 21 shots in a 4-3 loss to the Caps on March 14, 2014, while he was tending goal for the Vancouver Canucks. 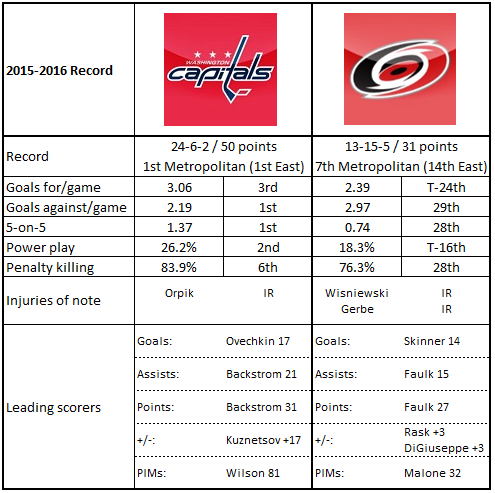 1.  Carolina certainly has spread its scoring around lately.  Over their last 11 games, 21 different player share in the points, including goalie Eddie Lack, who has a pair of assists.  There are 16 different skaters recording goals over the same span.

2.  The Hurricanes don’t do that whole “scoring first” thing very well.  They have scored first only 14 times; only six teams have done so fewer times.  Their winning percentage of .571 in those games (8-2-4) is third-worst in the league, ahead of only the Calgary Flames (.556) and the Vancouver Canucks (.467).

3.  While the Hurricanes have a decent offense, they have difficulty getting started in games (as evidenced by that “scoring first” thing).  Their 17 goals scored in the first period is third-fewest in the league, ahead of only the Buffalo Sabres and the Philadelphia Flyers (14 apiece).

2.  Washington took a roundabout way in doing it, but they won their 17th game of the season when scoring first when they beat the Rangers on Sunday night.  The 17 wins ranks second in the league to the Chicago Blackhawks, who have 18 wins when scoring first.  The Caps’ .944 winning percentage (17-1-0) in such games leads the league.

5.  The Caps’ possession struggles continue.  The Rangers out-attempted the Caps, 51-36, on Sunday night (41.4 percent Corsi-for).  The Caps are below 45 percent in four of their last five games and below 40 percent in two of them (numbers from war-on-ice.com).

The next assist Jordan Staal records will be his 200th in the NHL.  He has been on a roll of late to get himself into position to reach that milestone.  Staal is 4-4-8 over his last 12 games and has points in four of his last five contests.  It is quite an improvement over the 3-3-6 scoring line he posted over his first 21 games this season.  He still has some work to do to get to the half-point per game player he was for the Hurricanes in his first three seasons after arriving in Carolina from Pittsburgh (95 points in 176 games).  Staal’s scoring this season has had the flavor of empty calories, though.  In 11 games in which he registered a point, the Hurricanes are 7-3-1, a winning percentage ahead of their overall pace, but not particularly impressive otherwise.  Staal is 7-3-10, minus-5, in 34 career games against Washington.

T.J. Oshie is hot as a pistol at the moment.  Over his last four games he is 5-3-8 and is shooting 62.5 percent (five goals on eight shots).  He has settled in quite nicely as the top-line right wing.  There is an odd statistic that attaches to Oshie, too.  Hits… he is third on the team in credited hits with 61, behind only Alex Ovechkin (93) and Tom Wilson (91).  With the departure of Troy Brouwer and the injury to Brooks Orpik, the Caps are not credited with hits with the frequency they might have otherwise, but it is still an interesting number, given that Oshie is not the biggest player out there (5’11”/189 pounds).   Oshie is 2-5-7, even, in nine career games against Carolina.

They say that only winning matters, and on one level that is true.  But winning as a habit is a product of playing well, and the Caps have not done so as well as the five game winning streak they bring into this game suggests.  Carolina has the capacity, given their ability to minimize shots and do well in possession numbers, to frustrate the Caps in this last game before the holiday.  The Caps just have not been a very good possession team now for more than a month.   At some point one would expect this to catch up with them, and that puts a premium on getting back to basics and pinning teams in their own end of the ice.  If they can do that against the Hurricanes, the home team’s goaltending issues come into play, and this could be a nice present to take into the holiday break.