The Peerless Prognosticator is ON THE AIR!!! -- Caps vs. Islanders, December 16th

Just sit right back and you'll hear a tale,
A tale of a fateful trip
That started from this Island port
Aboard this tiny ship.

The team, they skated on the ice
Of this old storied barn

The millionaire and his wife.

The professor and Mary Ann...

So this is the tale of the Islanders,
They've sucked for a long, long time,
They'll have to make the best of things,
It's an uphill climb.

The goalie and the Skipper too,
Will do their very best,
To make the others comfortable,
In the New York island nest.

No goals, no wins, no points this month,
Not a single standings point,
The fans they all were askin’,
"Who’s running this here joint?”

So join us here tonight my friends,
It’s hard to find a smile,
From 20 stranded Islanders,
Here on "Charles Wang’s Isle."


The Islanders have not won in December…at all. Starting with a 5-2 loss to the Capitals on December 4th, the Islanders are 0-6-0 in December. They’ve only had as much as one one-goal game (a 4-3 loss to the Flyers in Philadelphia a week ago). They have been outscored 30-11, and it isn’t as if they’ve been falling to the Red Wings or the Sharks in the midst of this… a 5-1 loss to Atlanta… a 4-2 loss to Toronto… a 3-1 loss to Columbus. When they finally did play a top team on top of their game, the Islanders melted faster than a scoop of Chunky Monkey on a hot plate, getting stomped by Pittsburgh, 9-2.

- In none of those games have the Islanders reached the 30-shot mark, but they have given up at least 35 in four of them.

- In 18 periods of hockey, they have allowed at least one goal in 15 of them.

- They have been outscored 9-2 in the third period. That is on the heels of being outscored 11-3 in the second period. This team isn’t finishing games well.

- Here is how bad it is for the Islanders… their leader in plus-minus is Andy Sutton (+2). The rest of the overall isn't pretty, either... 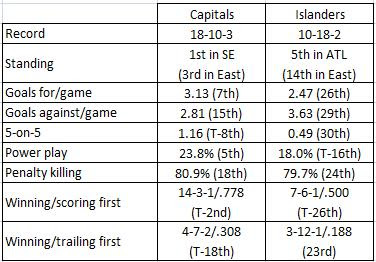 The Islanders are yet another team that is banged up. They have no fewer than six players on injured reserve: goalie Rick DiPietro, Mike Comrie, Kyle Okposo, Frans Nielsen, Bruno Gervais, and Radek Martinek.

Bill Guerin is tied for the team lead in goals scored (11), and he had points in the first four games on this six-game losing streak before being held scoreless by Pittsburgh and Columbus. He is 23-9-32, -2 in 45 career games against the Caps.

Trent Hunter is also tied for the team lead in goals (11) but doesn’t have one since finding the back of the net against the Caps on December 4th. Including that goal, he is 4-7-11, +8 in 18 games against Washington.

Of course, there is Sim…Jon Sim. Cap Killer Jon Sim, with his 11 goals in 22 career games against Washington (46 in 316 games against everyone else). He has never, however, had one as a member of the Islanders. OK, he’s only played against the Caps once in an Islander sweater, so it’s hard to spot a trend.

On the blue line, Brendan Witt brings in a streak of 11 consecutive games without finding himself on the plus-side of the ledger (he has only two such games this year). That’s the longest current streak of any Islander defender.

In goal, the cracks have spread in Joey MacDonald’s game. He was arguably the best Islander on the ice when he allowed four goals on 46 shots in a 5-2 loss to Washington on December 4th. Since then, he’s allowed 16 goals on 108 shots (.852 save percentage) in losing four straight decisions. He has one win in his last eight decisions dating back to November 26th, and in those eight games he has allowed fewer than four goals only twice.

The problem for the Islanders is they really have nowhere else to turn. Yann Danis has appeared twice on this six-game losing streak and been shelled to the tune of nine goals on 44 shots (.796).

The Islanders aren’t going to get a lot of chances, if their recent history is a guide. What chances they do get, they will need to capitalize on, and that means converting power plays. Streit leads the team in power play goals and is second (to Weight) in total power play scoring. He’s got to have a big night with his big shot to avoid this going badly for the Islanders.

The Islanders might lack talent and might be depleted, but they can be difficult to play against. They will look to cause grief in the Caps’ end, and that means limiting mistakes in their own end for the Caps. The Islanders might try to pay particular attention to Alzner in forcing him to make decisions with the puck sooner in the hope of causing turnovers. Alzner is a steady, level-headed guy. This will be tested.

This is a dangerous game. The Islanders are thin on talent when healthy. They are absolutely anorexic at the moment. They haven’t played well, or at least successfully in a while. But in Weight and Guerin they have veterans who, if their best days are (long) in their past, still know how to play the game. And there is no team against which a club can just show up and win. The Caps have won five of six, including a couple of stirring wins in their last couple in the midst of goaltending adventures. They might be feeling a bit fat and happy with themselves – a recipe for disaster. Plus, the Caps are still only 6-9-2 on the road.

There are enough warning signs surrounding this game so that the Islanders should have the Caps’ attention. And if they do, they have no business winning this game. They won’t…

There is a lot of ink and storage space being devoted to the exploits of several NHL players this year… Buffalo’s Thomas Vanek and his 24 goals… Pittsburgh’s Evgeni Malkin and his 49 points… even Tim Thomas and his microscopic goals-against average. But if you’re looking at early Hart and Pearson Trophy contenders, you’d better bring your “A” game to dethrone the champ.

Alexander Ovechkin, through 29 games played, is 17-23-40, +10, which ranks him third among scorers, behind Sidney Crosby and Evgeni Malkin. But here is where things get interesting and reflect the next step in the development of Ovechkin…

Ovechkin is the only player in the NHL who ranks in the top-five among all players in goal, assists, points, and hits. More to the point, he is in some respects outpacing his results over a comparable number of games last year: 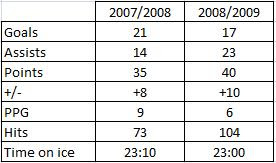 Vanek is on a pace for 66 goals in his race for the Richard Trophy (and fewer assists -- 14 -- than Ovechkin has right now). Malkin is on a pace for 134 points in his race for the Ross Trophy. But given Ovechkin’s remarkable consistency over his career, if someone else is going to win the Richard, the Ross, or even the Hart, or the Pearson, they’ll have to earn it.
Posted by The Peerless at 2:18 PM 2 comments: