“Unless we progress, we regress.”
-- Dwight D. Eisenhower

When the 2013-2014 season dawned Marcus Johansson was fifth in his 2009 draft class in career points (95), trailing only Ryan O’Reilly (127), Evander Kane (159), Matt Duchene (193), and John Tavares (249), not bad for the 24th overall pick in that 2009 draft.  After posting progressively better seasons in points per game over his first three seasons (0.39, 0.58, 0.65), it seemed reasonable to expect that Johansson would improve once more skating with Nicklas Backstrom and Alex Ovechkin, and doing so under the tutelage of head coach Adam Oates.

Things did not quite work out that way.  To say the 2013-2014 season was a step backward for Johansson is the reflexive reaction to his performance (8-36-44 in 80 games, 0.55 points per game), but that is a bit too simple.  At the 30,000 foot level Johansson’s season suffered from two things.  First, he continued a career trend of not being an especially prolific shooter.  Over his first three seasons Johansson averaged 1.27 shots per game.  In 2013-2014 he actually averaged slightly more (1.33).  However, Johansson shot to a career low 7.5 percent, compared with his career shooting percentage of 14.2 coming into this season.  That 7.5 shooting percentage was tied for 237th among 287 qualifying forwards in the NHL this season.  It might have worked out better for the Caps if Johansson was more efficient.  The Caps were 5-2-1 in games in which Johansson scored a goal.

It gets worse.  Johansson recorded one goal in his last 37 games on 46 shots, a shooting percentage of 2.2.  His shooting percentage at even strength for the season was 2.5 percent (two goals on 80 shots), 290th of 293 forwards playing in at least 75 percent of their team’s games.  Johansson had one even strength goal in his last 64 games (1.1 percent shooting on 88 shots on goal).

It does not get better.  Looking at Johansson’s ten-game segments, he started hot with ten points in his first ten games (all assists), then slowly leaked oil over the rest of the season until he ended up with just four points in his last segment (11 of the last 12 games of the season).

It was not as if Johansson was skating in unfamiliar territory.  At 5-on-5 he spent most of his time with Alex Ovechkin (600:11) and Nicklas Backstrom (578:06),  although as a share of his total 5-on-5 ice time that was somewhat lower than in 2012-2013.  He spent 56.2 percent of his 5-on-5 ice time with Ovechkin in 2013-2014 compared to 72.7 percent in 2012-2013.  With Backstrom the respective percentages were 54.2 and 72.0.  But strangely enough, Johansson did not have either of his even-strength goals with Ovechkin or Backstrom, nor did he have either of them with the next two forwards on the most ice-time together list, Troy Brouwer and Jay Beagle.  Those even strength goals came skating with Jason Chimera and Joel Ward (against Philadelphia on March 2nd), and with Brooks Laich and Tom Wilson (against Minnesota on November 7th), none of whom he spent as many as 100 minutes of 5-on-5 ice time with this season. 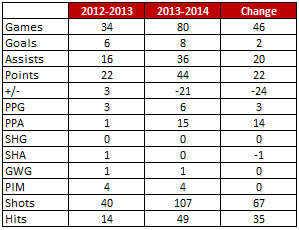 Cheerless’ Take… Once you dig through all the fancy stats, Johansson’s goals-for percentage at 5-on-5 was 41.2 percent.  That is 8.1 percentage points lower than the team.  That 41.2 percent was 247th of 293 forwards playing in at least 75 percent of their games.  The minus-8.1 percent was 241st among that group of forwards.  Why?  Only 27 forwards in that group were on ice for more goals against.

Game to Remember… November 7th versus Minnesota.  Marcus Johansson had just come off a two-point, game-winning goal effort against the New York Islanders when the Caps hosted the Minnesota Wild on November 7th.  Minnesota was coming into Verizon Center on a three-game winning streak, seeing success through tight defense, having allowed just one goal over the two games preceding their visit to Washington.  Minnesota was continuing their run of good defense against the Caps, limiting the Caps to one goal over the first 40 minutes, that coming on a power play goal by Alex Ovechkin on which Johansson assisted.

As the clock was winding down it looked as if that was all the Caps would get with the Wild clinging to a 2-1 lead.  Then, with just over three minutes left in regulation, Brooks Laich and Mikko Koivu battled for a loose puck behind the Minnesota net.  The puck squirted out to Tom Wilson in the right wing corner.  Wilson used his big frame to set a legal pick as Johansson circled around and picked up the puck.  He continued out from the corner, circling into the right wing circle where he snapped a wrist shot that caromed off the leg of defenseman Nate Prosser and past goalie Josh Harding to tie the game with 3:08 left.  Regulation would end that way, the teams tied at 2-2. Washington would earn the extra standings point in the Gimmick to end the Wild’s three game winning streak and extend the Caps winning streak to a season-high four games.

Game to Forget… January 30th versus Columbus.  This one was over early, and Marcus Johansson got a good look at it.  The Blue Jackets got their fans into it early with a shorthanded goal 12:18 into the game.  After that, the home team made short work of the Caps.  Columbus added to the lead less than five minutes after the shortie, then made it 3-0 just 24 seconds into the second period.  When Ryan Johansen made it 4-0 12 minutes into the second period, the competitive portion of the game was over, Marcus Johansson being on ice for each of the last three goals against.  Johansson would finish the game with a minus-4 and no shot attempts in 16:41 of ice time in a 5-2 Capitals loss.

The best that could be said for Marcus Johansson’s season is that it was not a big step backward.  However, it was not a step forward, either, which is disappointing for a 23-year old still expected to be on the upward arc of his developmental curve.  Perhaps it was luck of  a bad sort that made for a lackluster season.  It was not so much his shooting frequency that depressed his goal total as much as his shooting percentage, which was cut in half from his career average.  His even strength play was an anchor on a line that did not perform the way one would expect of a number one line, his two even strength goals itself a source of frustration, but his 23 even strength points failing to finish in the top-50 among left wings in the league.

There are times when Johansson still seems to have the mental approach of a center while playing wing, looking to make a play rather than finish it.  Would a more selfish approach to finishing plays benefit the club?  That is a question to ponder heading into next season.  There is also the matter of defense, or at least holding one’s own in the defensive end.  That Corsi-for percentage at 5-on-5 of 48.3 and goals-for percentage of 41.2 (247th of 293 forwards playing at least 75 percent of their team’s games) will need work, too.  All in all, it had the look of a step backward for Marcus Johansson in 2013-2014.

Posted by The Peerless at 9:05 PM No comments: