The Peerless Prognosticator is ON THE AIR!!! -- Game 31: Capitals at Blue Jackets, December 18th

The Washington Capitals take to the ice on Thursday night to face the Columbus Blue Jackets in the middle game of their three-game road trip.  The teams played just a week ago, but the intervening seven days have been, shall we say, eventful for both teams.

The Caps played two game since losing to the Blue Jackets in overtime last Thursday, taking three of four points from Florida teams – a 4-2 win over the Tampa Bay Lightning (completing the sweep of a two-game set played over a four day period) and a 2-1 Gimmick loss to the Florida Panthers that featured a record-setting 20-round trick shot competition.

Over on the other side, the Blue Jackets have played twice since facing the Caps, and both of their games went to extra time, both to the freestyle competition, beating Pittsburgh (4-3) and Detroit (1-0).  The two Gimmick wins extended to four the number of consecutive games played by Columbus that went to extra time, and five of their last six games.  One odd part about the run is that the Blue Jackets won all five games settled in extra time, three of them in the Gimmick.  Another is that the five games in six settled in extra time follow 24 games to start the season in which Columbus was involved in only two extra time games.

It would appear likely that Sergei Bobrovsky will get the call in goal for Columbus in what would be his eighth straight appearance.  Why not?  He’s on quite a roll.  In seven appearances since the start of December, Bobrovsky is 7-0-0, 1.63, .950.  That 7-0-0 run coincides with a month of December in which Columbus has risen from dead last in the Eastern Conference when the month began to fifth place in the Metropolitan Division, six point behind the fourth-place Capitals, and 12th of 16 teams in the conference.

Not that the Columbus record in December is pure, unalloyed gold.  Consider their opponents.  In addition to playing games on the margin (six one-goal wins in seven victories), their colectio of opponents has ranged from “meh” to depleted.  Columbus has beaten Florida twice (ok, the Panthers beat the Caps), a team that, it should be remember, has lost 16 of 29 games.  They have beaten Philadelphia, a team that has lost 19 of 30 games.  They beat Pittsburgh when the Penguins had seven players out of the lineup, including Sidney Crosby.

What the Blue Jackets have done in the seven-game streak is display a certain consistency on offense.  Embedded in the streak is another one in which they scored three goals in regulation or overtime in five straight games.  Drilling down, though, the offense is anything but balanced.  Boone Jenner (5) and Nick Foligno (4) have combined for nine of the 17 goals scored in the seven-game winning streak.

Here is how the number compare overall between the teams… 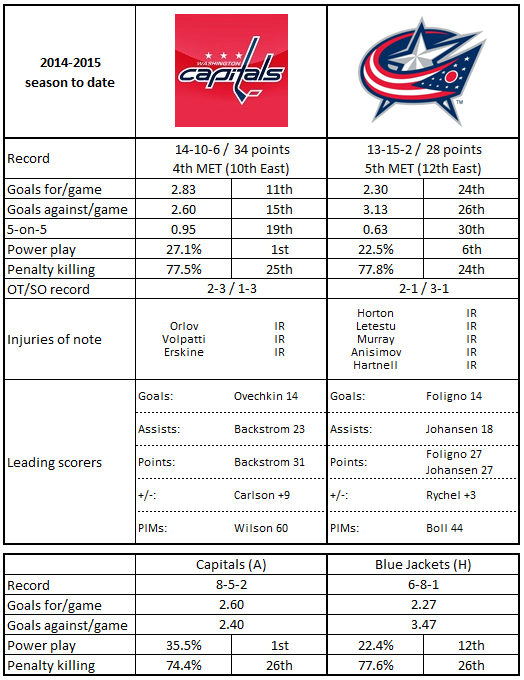 2.  That PDO number has been pretty good, too.  At 105.2 overall in the seven-game winning streak (10.2 shooting percentage, 95.0 save percentage), the question becomes one of whether the Blue Jackets are in for a correction.

1.  Once upon a time, the Caps were denying teams shots.  December did not start that way, the Caps allowing 30 or more shots on goal in three straight games, the first time this season they allowed 30 or more in three straight contests.  In their last three games, however, they are back to allowing less than 30.  Unfortunately, the Caps lost two of those games, both in extra time.

2.  When the Caps lost to the Blue Jackets in overtime last Thursday, it was the first Washington loss to Columbus on home ice since they dropped a 5-4 decision in overtime on November 1, 2009.  When visiting Columbus, the Caps have not fared as well.  They lost their two most recently played games in Columbus by a combined score of 10-3.

For a while there, Ryan Johansen was scoring points in bunches – two against Tampa Bay on November 8th, four points against Philadelphia on November 14th, three against Boston on November 21st.  That three-point effort against the Bruins on November 21st was Johansen’s last multi-point game.  Since then he is 2-2-4 in 11 games, and he is without a goal in his last seven contests.  He is still tied for the team lead in points, but one has the feeling his production is going to have to improve if the Blue Jackets are going to continue climbing back up in the standings.  He is 3-2-5, plus-1 in seven career games against Washington.

Mike Green has once more had to deal with the injury bug, most recently missing seven games to an upper-body injury.  Still, Green is without a point in his last six games, and he is without a goal in 17 straight contests, his last one coming on October 22nd in a 3-2 loss to Edmonton.  The subject of, if not loud, then persistent trade chatter, Green has assumed what amounts to third-pair minutes for the Caps.  He is fifth among defensemen in even strength ice time per game (16:44), with only partner Nate Schmidt logging fewer minutes per night at evens (14:06) among defensemen appearing in at least 20 games.  With the emergence of John Carlson, the arrival of Matt Niskanen and Brooks Orpik, and his missing more time to injury, Green does not cast a large shadow on the blue line these days.  Although Green has been a dominant player in a subtle way, it would be nice to see some of the old Green come out to play from time to time.  He is 1-4-5, minus-3 in 10 career games against Columbus.

Last Saturday, the Caps had to deal with a Tampa Bay team bent on revenge for a loss pinned on them by the Caps.  Now, it is Washington playing the role of the team looking to settle a score after dropping the 3-2 overtime decision to Columbus last week.  The Caps have the incentive of trying to extend a nice streak of games with standings points earned (4-0-2) and have a chance to stop the Columbus advance up the standings in its tracks.