The Peerless Prognosticator is ON THE AIR!!! -- Game 64: Devils at Capitals, March 2nd

The Washington Capitals take the ice for game two of their five-game home stand with an opportunity before them. First, they can take a big wet bite out of the New Jersey Devils and their six-point lead over the Caps in the Eastern Conference standings when the Devils stop by Verizon Center. Second, the Caps can establish some momentum with a win in that it would be their fourth in a row. It would tie the Caps for their longest winning streak under Coach Dale Hunter (December 28 – January 3) and longest since their seven-game winning streak to start the season. And, it would at the very least put some additional pressure on Southeast Division rivals Florida (three points ahead of Washington going into Thursday’s action) and Winnipeg (one point ahead the Caps).

Meanwhile, the Devils come to Washington to play the second part of a back-to-back set of games, flying in from Boston, where the Devils lost in overtime to the Bruins, 4-3, last night.

Here is now the teams stack up against one another: 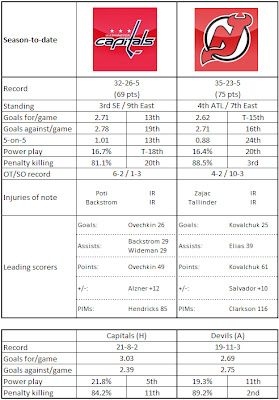 1. The Devils are among the class of the league when it comes to penalty killing. They rank third overall and second on the road. That speaks to the Devils’ efficiency in penalty killing. But they are also effective in this respect – only twice in 20 games did the Devils allow more than three power play opportunities to the opposition. Good thing, because there have been some cracks in the Devils’ penalty killing façade in those 20 games. They are 43-for-52 (82.7 percent) in that stretch.

3. New Jersey has 35 wins so far this season. That total ranks tied for fourth in the Eastern Conference. However, they have only 25 wins in regulation and overtime – 11th in the East. If the Devils make the playoffs, their 56.4 percent shooting percentage and 22 goals in the Gimmick that they currently have (both of which lead the league by significant margins) will be the margin of success.

3. No team has more one-goal wins than do the Devils. In years past, that might have been a product of the goaltending of Martin Brodeur and an offensively-challenged, but opportunistic group of skaters. This year, take away the Gimmick record, and New Jersey goes from 19-6-5 in one-goal games to 9-6-2 in one-goal games.

4. New Jersey has for years had a reputation as a superb defensive team, but this year there is this. The Devils have allowed a total of 92 goals in the first 40 minutes of games this season. They have allowed 77 goals in the third period alone. Only Carolina and Columbus have allowed more in the last 20 minutes.

1. In the last four seasons, the Caps last 20-games-of-the-season records have been as follows:

An average of 14-4-2. Remember that as they Caps take to the home stretch.

5. Jeff Schultz is known more as a defensive defenseman. But he has recorded double-digits in points the last four seasons. He will have to haul it some to reach that mark in the last 19 games. He is currently 1-5-6. He has it in him. Two years ago he finished 0-6-6 in his last 19 games. OK, we are probably reaching here.

Mike Green has six games under his belt since recuperating from sports hernia surgery. He has yet to record a point. That is going to have to change if the Caps are to make the post-season. The Devils might be the team against which the Caps – and Green – can kill two birds with one stick, as it were. Green has a career scoring line against the Devils of 5-5-10, plus-4, in 18 games. However, among those five goals and five assists are three of each on the power play. Perfect…he gets of the schneid on the score sheet, the Caps do something about their power play. What could go wrong?

2. Make ‘em count. The Devils do not allow many power plays. The Caps do not get many (sixth lowest total power play opportunities at home). They have to make those infrequent opportunities count.

3. No tricks, no Gimmicks. New Jersey is 10-3 in trick shot competitions this season, 25-23-2 in hockey games decided in the hockey portion of the show. Do the math.

In the end, these are teams that at the moment are headed in opposite directions. The Caps are 3-0-0 in their last three games and have held opponents to two or fewer goals in five of their last seven games. The Devils are 0-3-1 in their last four, have not scored more than three goals in regulation in seven straight games (and nine of their last ten), and are coming off an overtime loss on the road last night. The stars are aligned for a Caps win here. Uh…yeah. How accurate are the stars, anyway.