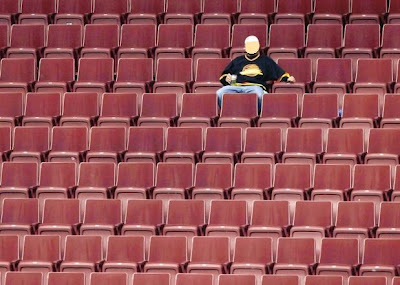 I’m a lot like any other working stiff.  I get up early in the morning, prepare for the day, head to the train, and go to work.  Once at the office I have to deal often with people debating over large sums of money.  At the end of the day – usually a long day – I get back on the train and try not to think about tomorrow’s responsibilities at the office.  I get home, open the mail, and I find bills – the mortgage, insurance, the credit cards, utilities.  I spend a portion of the evening dealing with those matters. The weekend comes.  It is a time to relax, but it is also a time to fix the leaky faucet, clear the clogged gutters, mow the lawn, trim the bushes, and clean out the garage.

I steal away some time for myself by buying a ticket to see competition on the ice and excellence in the display of talent.  I go out of a passion for those qualities, for the game, for the sheer entertainment of it.  It is recreation in the literal sense of the word.  I feel better; my spirit is “re-created” for having spent some time away from the commute, the job, and the chores.  It is an opportunity to step outside my life for a few hours.

For the last two months, the NHL and the NHL Players Association have debated over large sums of money.  They have put men in suits in the headlines, not men in jerseys.  The news is about talking, not competing.  It is about negotiation, not the game.

You want to know why fans are mad?  They have taken our game and made it look like our lives.

Posted by The Peerless at 11:05 AM No comments: 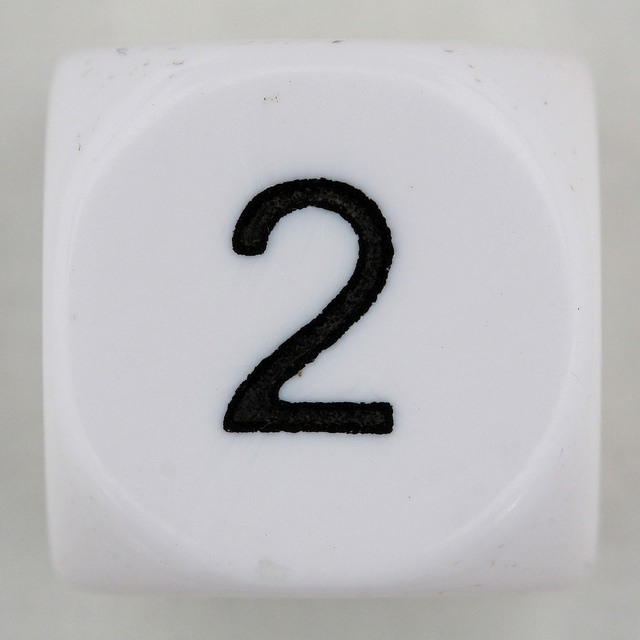 The Washington Capitals entertained the Edmonton Oilers on Thursday night in a game that featured the once-thought to be “in” team of young and precocious stars skating against a team that is thought to be the next “in” team of young and precocious stars.  The Caps of Alex Ovechkin, Nicklas Backstrom, and Mike Green have the experience of being spoken of as fresh, exciting, and a contender for years to come.  Unfortunately for the Caps, it has not quite worked out that way.  The Oilers, on the other hand, with Taylor Hall, Ryan Nugent-Hopkins, Jordan Eberle, and now last June’s number one draft pick Nail Yakupov, represent the latest version of “fresh and exciting” the NHL has to offer.

Fresh and exciting was not exactly how this contest started for the Oilers.  A big reason for that is despite the obvious talent and potential Edmonton has up front, there is still work to do on the back end.  That shortcoming was on display early in the first period when Mathieu Perrault beat defenseman Ryan Whitney to a loose puck deep in the Edmonton end to avoid an icing call.  Perreault slipped behind the Oiler net to goalie Devan Dubnyk’s left.  Coming out the other side Perreault had an opportunity to shoot, but he found Jason Chimera on the opposite side with a stride on the other Oiler defenseman Ladislav Smid.  Perreault found Chimera with a pass that merely had to be redirected through the short side before Dubnyk could get across to block the shot.  Chimera did just that, and the Caps had a 1-0 lead at 5:33 of the period.

It was a good start for the Caps, but the Oilers paid it no mind.  Barely two minutes later the visitors got the goal back when Nugent-Hopkins stepped around Jay Beagle, then froze defenseman Mike Green with a faked shot.  It gave Nugent-Hopkins time to take one more step to get a better shooting angle, and his wrister from between the hash-marks beat goalie Michal Neuvirth cleanly to tie the game.

The Oilers took the lead when Nugent-Hopkins played the role of set-up man.  Holding the puck at the goal-line to the left of Neuvirth he sent the puck through the slot to Jordan Eberle left open at the edge of the left wing circle.  Eberle one-timed the puck over Neuvirth’s left shoulder to put the Oilers on top, 2-1.  There was no other scoring in the period, but enough damage was done for the Oilers to take that lead and a lead on the shot meter of 13-5 into the locker room after 20 minutes.

The Oilers came out flying in the second period, the Caps seeming to be a step or more behind every time an Oiler forward touched the puck.  What seemed inevitable came to pass in the fourth minute of the period when Sam Gagner and Taylor Hall worked a give-and-go, Hall finishing the return pass to put the Oiler up by a 3-1 margin at the 3:48 mark.

Sometimes with a young group of talented players, their focus will start to wander when things are going well.  That might have been the case when the Oilers had a chance to put the game away mid-way through the period.  The Oilers were guilty of over-passing and passing up good opportunities, and it finally bit them.  Nugent-Hopkins tried to backhand a pass through the hash-marks, and Karl Alzner got a stick on it to deflect it to the side boards.  Brooks Laich was there to collect the puck, and he sent it up to Chimera, who was streaking out of the Caps’ zone.  Having taken Laich’s lead pass in stride, Chimera used his speed to foil the angle that Nick Schultz thought he had on him.  His snap shot from between the circles beat Dubnyk through the five-hole, and the Caps were back to within a goal.

The goal got the Caps’ crowd back into the game, and the cheering turned into a roar when Nail Yakupov made the mistake of lowering his head as he was about to cut into the middle of the ice just inside the Caps’ blue line with just over five minutes left in the period.  Just as he crossed over, Alex Ovechkin lowered his shoulder into the rookie and dropped him to the ice like a sack of wet cement.  Yakupov skated slowly to the Edmonton bench, but did return later.  The hit changed the momentum to the Capitals, putting the Oilers back on their heels and exposing once more their comparatively weaker blue line and goaltending.  Mathieu Perreault took advantage of it when he settled into open ice at Dubnyk’s left late in the period.  From there he put the finishing touches on a pass from behind the Oiler cage by Marcus Johansson, drawing the Caps even at 3-3 with just over a minute left in the middle period.  The teams went to their locker rooms with no further scoring, but the Oilers still holding a 27-17 edge in shots.

Once momentum is lost it is hard to regain, and the Oilers found that out when the Caps struck in the first minute of the third period.  Matt Hendricks scored his first goal of the season when he and Jay Beagle double-teamed Theo Peckham in the left wing corner to Dubnyk’s right.  Hendricks kicked the puck free and headed to the net while Beagle chased the puck down along the end wall.  Before Peckham could recover and throttle Beagle, the Caps forward slid the puck out front where Hendricks batted it in through Dubnyk’s pads to give the Caps the lead again at 4-3.

Jack Hillen scored his first goal as a Capital in the period’s eighth minute when his wrist shot was deadened in front by an Oiler.  The puck’s change of pace and direction was cause for it to skitter by Dubnyk’s left pad on the far side, giving the Caps a two-goal margin at 5-3.  From there the Caps forced Edmonton to play zone-to-zone, denying them the opportunity for stretch or cross-ice passes that could break a skater free for a scoring chance.  The Oilers played into the Caps’ hand by trying to force passes through the middle of the ice or trying 60-foot passes that were frequently deflected away from their targets.  It made for a boring final ten minutes of the game, especially considering the scoring over the first 50 minutes, but that suited the Caps just fine as they skated off with their fifth straight win, 5-3. 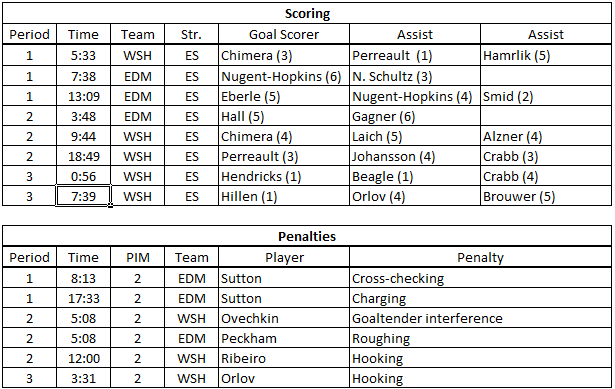 Posted by The Peerless at 3:56 AM No comments: