The Washington Capitals ended the old year in dismal fashion, hoping 2013 would be more successful than the year they left behind at Consol Energy Center in Pittsburgh.  The Caps were a team fighting a flu bug, and it showed as they dropped a 4-1 decision to the Penguins on Monday night.

The Caps were missing Mike Ribeiro, Marcus Johansson, and Dmitry Orlov to illness, leading the club to calling up Zach Hamill from the Hershey Bears for his first appearance in a Caps uniform, and to give Jeff Schultz a sweater for the first time since October.

The first period passed without scoring, the teams exchanging unsuccessful power plays when the Caps’ John Carlson was sent off at 12:43 for interference and Matt Cooke for the Penguins at 18:22.

The second period started a bit differently.  Mike Green was sent to the penalty box for elbowing 44 seconds into the period.  At 1:13 the Penguins converted the opportunity when Evgeni Malkin backhanded a centering feed from Sidney Crosby past Caps goalie Braden Holtby.

Pittsburgh doubled their lead at 13:36 when Malkin struck again.  This time it was more of an individual effort, picking up a pass from Kris Letang as he was heading into the neutral zone.  He feinted toward the middle, which froze Roman Hamrlik.  Malkin used the opening to curl wide where there was a clear path to the Capitals’ net.  He pulled the puck onto his forehand and slipped it between Holtby’s pads to give the home team a 2-0 lead, a score that stood up as the teams went to the second intermission.

Pittsburgh widened its lead in the eighth minute of the final period when Malkin drew two Caps to him, and Malkin found James Neal for a quick snap shot that sailed past Holtby’s glove.

The Caps got one back when Joey Crabb poked a loose puck past Pens goalie Marc-Andre Fleury after a goal-mouth scramble, but that would be as close as the Caps would come.  Craig Adams potted an empty-net goal with 29 seconds left to ice the game and send the Caps home with their second straight loss and fourth in six games by a 4-1 margin. 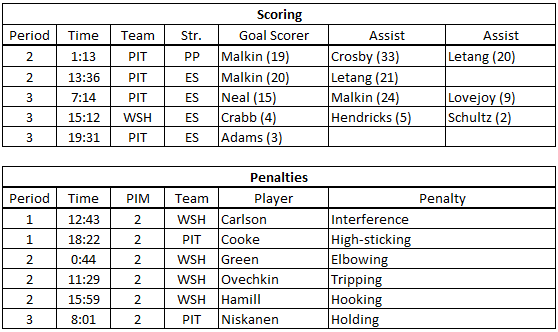 Posted by The Peerless at 9:03 AM No comments: