The Peerless Prognosticator is ON THE AIR!!! -- Game 29: Predators at Capitals, December 7th

It’s been awhile – four days – but the Washington Capitals head back to the ice, hosting the Nashiville Predators at Verizon Center on Saturday night.  It is fitting that the Predators come to town just as a wintry mix descends on the Capital region.  Nashville has lost four games in a row and has only five goals in those four games.  They are, as you might say, cold.

This is not a team that the Capitals have a lot of history against.  Only 17 times in 14 seasons have these clubs met coming into this season.  Washington leads the all-time series with a 10-6-1 record.  The last time these teams met was back on December 20, 2011, a 4-1 Capitals win at Verizon Center.  Just to show how rosters can change, eight of the 18 skaters on that night for the Caps are no longer with the club (Dennis Wideman, Jeff Halpern, Mike Knuble, Matt Hendricks, Alexander Semin, Roman Hamrlik, Jeff Schultz, and Mathieu Perreault, if you are keeping score at home).  The backup goaltender on that night – Tomas Vokoun – is tending goal (or not, he being injured at the moment) in Pittsburgh these days.

As for the current edition of the Predators, as we noted, they come into this game losers of their last four games.  The Preds have had trouble finding the back of the net.  Not that they are a potent offense normally – tied for 25th in scoring offense in the league – but over their four straight losses they have a total of five goals.  Colin Wilson has a pair, Mike Fisher has a pair, and Viktor Stalberg has the other one.

A preview of a game against the Predators would normally include some mention of how goalie Pekka Rinne might influence the results.  He will not be doing any such thing in this game.  Rinne had arthroscopic surgery on his hip last spring and in October developed a bacterial infection in that same hip than has kept him on the shelf since.  That has meant something of a revolving door to the Nashville crease.

Carter Hutton was the contestant early on to replace the incapacitated Rinne, but after going 4-1-1 in his first seven appearances (including one no-decision), he allowed eight goals on 31 shots in 80 minutes over two appearances (both losses), and has been relegated to backup and relief duty.  Enter Marek Mazanec, a sixth round draft pick in 2012 from Czech Republic.  He was the goalie of record in each game of the 0-3-1 streak Nashville is on, but he can hardly be faulted for that result.  Overall he has a 2.99 goals against average and a .887 save percentage, but that is influenced by a difficult go of it in his last appearance – four goals on just 13 shots in 40 minutes of a 5-2 loss to Carolina on Thursday.

Here is how the clubs compare overall… 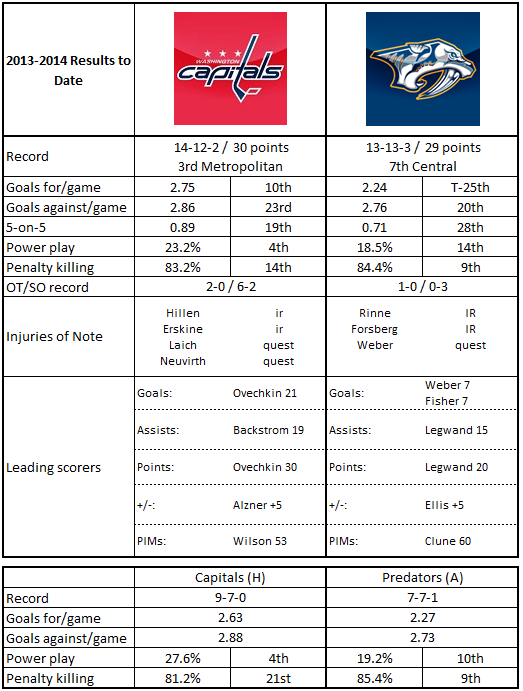 1.  In none of those four straight losses the Predators are carrying into this game did they score the game’s first goal.  That’s too bad for Nashville, and it is something that bears watching in this game.  The Preds are 11-1-2 in games in which they score first, 2-12-1 when they don’t.

2.  Nashville has had uniform difficulty outscoring teams on a period-by period basis in their four-game skid.  In none of the 12 periods of hockey or their one overtime did they outscore their opponent, and they were outscored by a 2-1 total in first periods, 6-3 in second periods, and by 5-1 in the third periods of games.

3.  Special teams have been a mixed bag for the Predators lately.  The power play has gone into a ditch.  Nashville is 0-for-13 over their 0-3-1 skid and just 1-for-18 over their last seven games.  The penalty kill has fared a bit better, killing off 13 of 15 shorthanded situations (86.7 percent) during the losing streak, although they have allowed power play goals in each of their last two contests.  They are 27-for-29 over their last ten games (93.1 percent).

4.  Shea Weber and Mike Fisher are tied for the team lead in goals with seven apiece.  There are 85 players in the league with more.

5.  Caps fans will not get to see erstwhile first-round draft pick Filip Forsberg for the Predators.  He has an upper body injury.  Shea Weber might play for the Predators after missing a week after taking a puck to the eye against Edmonton on Thanksgiving.

2.  Only Toronto stands between Washington and the top spot (or bottom, depending on your point of view) in shots allowed per game.  The Caps are allowing 35.0 per game to 36.6 for the Maple Leafs.

3.  Mike Green is the only Capital with a Fenwick-for relative percentage (difference between “for” and “against”) in 5-on-5 close situations greater than +10 percent.  He happens to be second in the league among defensemen in that particular fancy stat (Anton Stralman of the Rangers is at +13.8 percent).

4.  Ah, but forwards?  Only Joel Ward ranks in the top-50 in that same Fenwick-for relative percentage in 5-on-5 close situations.  He ranks 45th with a +5.2 percent.   If you are a glutton for punishment, Brooks Laich and Troy Brouwer rank 268th and 272nd among 284 ranked forwards in that statistic.

5.  All seven Capitals participating in the Gimmick thus far this season have at least one goal.  They are the only team that can say that.  They might not want to say it too loudly, though.

Matt Hendricks had a devoted following in Washington.  He was the kind of guy you root for… free agent signing, has a skill set that won’t make him a star, but he does whatever he can to stand up for his teammates and help them win.  And how can you root against a guy who displays this kind of support?  Hendricks left the Caps for Nashville in the off-season, and the change has not been kind to his game.  In 25 contests to date Hendircks has but one goal and one point on his scoring ledger, that coming on Hallowe’en against Phoenix.  He has been getting decent doses of ice time, despite the lack of offensive production; he has logged less than ten minutes of ice time only three times in those 25 games.  Oddly enough, one of those was his goal-scoring night.  After he scored his goal he left the game to an upper body injury after only 5:32 of ice time.  The cruelty of that was that he was not around for the shootout – his specialty – and the Preds dropped a 5-4 decision to the Coyotes.  He has only one career appearance against the Caps with no points recorded.

Yesterday, in what seemed like a bit of flash-mob analysis (and we mean that in the best possible way), we were shown just how meager the production of certain players has been this season at even-strength.  “The Brouwery Boys” have a combined assist total that is less than that of Paul Bissonette (4), who has played in only 17 games.  It is less than that of Boyd Gordon (remember him?).  It is less than former Capital draft pick Tim Kennedy (traded for a pick that became Mathieu Perreault, who was later traded for John Mitchell… no, not that John Mitchell, who happens to have more than twice as many even strength assists as these three…this John Mitchell).  Needless to say, something has to give here.  It’s not that they’re not trying hard.  But 28 games in?  Three even strength assists?  Good heavens.

1.  Five-by-five and five-on-five.  Look, this is really what it comes down to.  If the Caps can’t get well at evens against this team – the third worst ratio of goals for to goals against at 5-on-5 in the league – then this team has serious problems.

2.  Volume.  Assuming Marek Mazanec gets the start (he started the Preds’ last dozen games), dealing with high shot volumes has not been in his history.  Only five times has he faced more than 30 shots, and he is 2-3-0 in those games.

3.  Close fast.  The biggest problem the Predators have had in their mini-skid is letting things get away from them in the third periods of games.  They have allowed goals in the final frame in each of the four games and have been outscored, 5-1.  The Caps have not been an especially prolific team in the third period, tied for 22nd in third period goals scored.

In the end, it’s another Western Conference team, and the Caps have struggled with such teams that do not call Alberta “home” (3-5-1).  It is not the best way to turn around from their recent 2-4-1 slide (1-4-0 at home), and as a matter of style it is not the easiest team to do it against.  What it is, is an opportunity to get back to fundamentals, because a Barry Trotz-coached team is going to do just that.  If the Caps don’t match them, the Predators will diligently, persistently, and mechanically make the Caps’ night uncomfortable.  Do the right things the right way, and the Caps have too much skill for this team.

Posted by The Peerless at 9:48 AM No comments: