Capitals vs. Penguins: Takeaways and Throwaways from Game 1 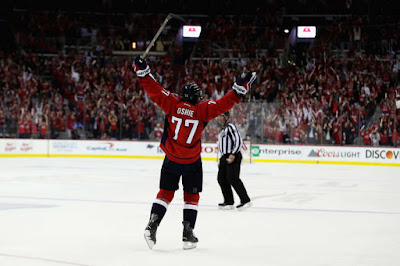 Game 1 of the Eastern Conference semifinal series between the Washington Capitals and the Pittsburgh Penguins is in the books.  And what a game it was.  You really don’t want to throw any of it away; you just want to watch it a few times to get some richer context and more nuances with each viewing.  But this is the space in which we do have those takeaways and throwaways, so let’s get to them.

The only thing that matters now is winning.  Whether is it pounding the puck and winning the Corsi battle, getting a wink from the hockey gods, or sunspots, winning is the bottom line on a one line balance sheet.  And the Caps have one win.  Trouble is, winning the first one is hardly new to the Caps over the history of this postseason rivalry, and the Pens are neither very successful in Game 1’s or in playoff overtimes in their recent history.  It suggest that the Caps are going to have to find a higher level of performance to get to “four” before the Penguins in this series.  There were some good signs on that score in Game 1, but there are some serious issues (second line, third defensive pair) that need to be addressed and improved as the teams go to Game 2.

Washington Capitals Win in Overtime...It Sure Looked Like a Goal

How close do two teams have to play to go to overtime tied, then have the game settled on a goal on which the puck crawled (or not, depending on your point of view) over the goal line?  Looking at the NHL Situation Room video on the overtime goal scored by T.J. Oshie on goalie Matt Murray, it sure looked as if it was a good goal...


Look at where the puck is resting at what appears to be the deepest point at which it entered the goal (it is partially obscured by the shaft of Murray's stick, near the post)... 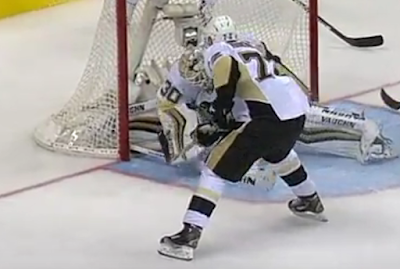 Not conclusive enough?...How about this (with the goal line enhanced)?...

It sure looks as if the entire puck has crossed the entire line.  But hey, your eyes might tell you something else.

And this was just Game 1.  Hang on tight.  It's going to be a crazy ride.
Posted by The Peerless at 7:55 AM No comments: 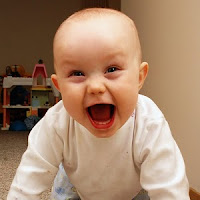 If Game 1 of the playoff series between the Washington Capitals and Pittsburgh Penguins is an indicator of what the rest of the series will be like, it will be one for the ages. The Caps took a lead then fell behind, dominated then were dominated. But in the end, they prevailed in overtime, taking Game 1 in the first extra session, 4-3.

T.J. Oshie was the hero for the Caps, recording a hat trick, including the game-winner in overtime. It was Andre Burakovsky who got the Caps started, however. He started the play by muffling a pass from Evgeni Malkin in the Caps’ zone and starting the puck the other way. Taking a pass from Jason Chimera to start the ensuing rush, he carried the puck down the right side into the Penguins’ zone. At the top of the right wing circle he fed Chimera skating down the middle. Chimera’s shot was stopped by goalie Matt Murray, but Burakovsky followed up and batted the loose puck into the empty net past Murray at the 10:13 mark.

That goal held up until mid-way in the second period when the Pens struck twice in short order. Ben Lovejoy followed up a shot by Nick Bonino, sneaking it past the right pad of goalie Braden Holtby at the 10:40 mark to tie the game. Then, Evgeni Malkin struck just 57 seconds later on a superb backhand shot that he lifted over the right shoulder of Holtby to make it 2-1, Penguins, 11:37 into the period.

The Penguin lead lasted just 33 seconds, though. T.J. Oshie gladly accepted a giveaway by defenseman Olli Maatta just inside the Caps’ blue line and headed the other way. Skating in on Murray, Oshie snapped a shot over the goalie’s left shoulder and under the crossbar to tie the game 12:10 into the period.

Oshie gave the Caps the lead early in the third period, the product of another turnover by the Pens at the Caps’ blue line. This time it was Alex Ovechkin collecting the loose puck and racing down the left side. His shot from the left wing circle was blocked by defenseman Trevor Daley, but the puck came back to Ovechkin. He spied Oshie cutting down the middle and fed him for a backhand shot that slid under the right pad of Murray to make it 3-2, 3:23 into the third period.

Pittsburgh tied the game mid-way through the period, taking advantage of some misfortune on the Caps’ part. The Penguins moved the puck around the wall from Phil Kessel to Carl Hagelin behind the Caps’ net. Hagelin fed Nick Bonino cutting to the net. Bonino one-timed the puck, the shot ticking off the stick of defenseman Nate Schmidt and past Braden Holtby to make it 3-3 at the 8:42 mark.

That would be all the scoring in regulation. Overtime was hardly a passive affair, the teams exchanging a healthy volume of shots. It was the Caps’ eighth shot of the extra period that would decide the contest, and not without some controversy. Trevor Daley tried to backhand the puck up the wall at the players bench, but had his attempt intercepted by Oshie in the neutral zone. Oshie skated into the Penguin zone diagonally across the ice, then circled around the Pittsburgh net. His wrap-around shot appeared to beat Murray’s right pad to the post and sneak over the line, and it was signaled thus by the referee as a good goal. The play went to video review, where it was upheld, Oshie’s hat trick goal being the game-winner at the 9:33 mark, giving the Caps the 4-3 win and a 1-0 lead in the series.

-- Team defense was occasionally an adventure for the Caps in this game. The goal scored by Ben Lovejoy might have been the most obvious example. With Nick Bonino entering the Caps’ zone with the puck at the start of the play, Nate Schmidt and Dmitry Orlov bumped into one another, allowing Bonino to step around them and take an unimpeded path to the net. His initial shot was stopped by Braden Holtby, but Lovejoy was there for the follow-up with neither defenseman in sight.

-- Jay Beagle was a force of nature in this game, in a figurative sense.  He exhibited an uncommon force of gravity with respect to sticks, getting one caught in his visor (giving him the look of a unicorn drawn by Salvador Dali) and another caught in his skate.  He still managed to record six hits, block two shots, and win 12 of 19 faceoffs.

-- Speaking of hits, Tom Wilson had six, but the long term effects of his effort might not be reflected in that column of the score sheet.  He endeared himself to Penguin fans for his on-the-edge takedown of Conor Sheary (that Pens fans, no doubt, will consider a kneeing penalty that wasn’t called) and goading Evgeni Malkin into an embellishment penalty.  Wilson took a coincidental cross-checking penalty on the play, but that is an exchange the Caps will take.

-- In the “game within a game,” strength versus strength favored the Caps in this contest.  The top line for the Caps (Alex Ovechkin, Nicklas Backstrom, and T.J. Oshie) were on-ice for three goals for, while the top line for Pittsburgh (Sheary, Sidney Crosby, and Patric Hornqvist) was on ice for the same three goals against.

-- In the “game within a game, part two,” Crosby was held without a point, had one shot on goal, but did win 19 of 28 faceoffs.  Ovechkin recorded an assist, had four shots on goals, and was credited with seven hits.

-- Every one of the 18 Pittsburgh skaters, except for Olli Maatta, recorded at least one shot on goal.

-- Braden Holtby allowed more than two goals in a game for the first time since he allowed four on 28 shots in a 4-3 Game 6 loss to the New York Rangers in last year’s Eastern Conference semifinal.  In the next seven playoff games he played leading up to last night, he was 4-3, 0.98, .964, with two shutouts.  Only in that context could a .933 save percentage (42 saves on 45 shots) last night even hint at an “off” night.

-- Brooks Orpik returned to action last night and logged 25:58 in ice time.  He was one of four defensemen to get more than 25 minutes on the night.  Why?  Nate Schmidt finished with 12:13 in ice time, and Dmitry Orlov finished with a total of 5:44, getting only one shift after the second period, none in the last 27:25 of the game.

Don’t get cocky, Caps fans (as if you could, given this team’s history).  The Penguins have a bad recent history in Game 1’s and in playoff overtime.  The loss was Pittsburgh’s eighth straight loss in overtime of a playoff game.  The last time they won one, it was Brooks Orpik delivering the game-winner to eliminate the New York Islanders in 2013.  It was also the seventh straight time the Penguins lost Game 1 when playing on the road.  And we won’t linger on the matter of the Pens and Capitals and Game 1’s and their utter lack of influence on the final series results.

Still, the Caps played well.  One could argue that they could play better, two of the goals coming from breakdowns that allowed Penguins far too much open space in the middle of the ice to dart to the net.  Then again, another goal was off a Capital, but that’s hockey.

The Caps got what they so sorely lacked in previous playoff games, especially against this opponent – someone to have a big game who is not named “Ovechkin.”  T.J. Oshie stepped up in a big way in this game, scoring in a variety of styles – off the rush, in close, using speed around the net.  It is that next dimension of skill that makes this Caps team as formidable as it is.   But that is hardly a collection of slugs and shrinking violets they are facing, too.  Game 1 is done.  Put it away, and get ready for Game 2.  Count on the Pens being ready.