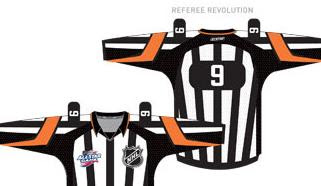 OK, so the referees are debuting new uniforms at the All Star Game. They were described by Keith Leach, Director of NHL Merchandising, Reebok, thusly...

"Aesthetically, the design of the 2009 NHL All-Star Eastern and Western Conference uniforms is a deliberate break from traditional hockey uniform patterning and symbolizes the revolutionary advances the sport has made in both technology and popularity. The asymmetric cut lines are meant to create visual motion in the uniform, which is both a literal reference to the speed of the game and symbolic reference to its evolution into the future. The officials' jerseys will enhance the way the referees and linesmen follow the action on the ice without fear that their microphones will become entangled."

"Yeah, what he said... (Don VanMassenhoven)
"Will people stop telling me how much they loved me in 'A Few Good Men?'" (Kevin Pollock)
"Piping! Where's the piping?!" (Gary Bettman)
Posted by The Peerless at 6:25 PM 2 comments:

Email ThisBlogThis!Share to TwitterShare to FacebookShare to Pinterest
Labels: referees, things that make you go 'hmm...'

"Guys are going to start losing their penalty killing jobs if they don't start getting with the program.."

That's what Bruce Boudreau had to say about the penalty killing for the Caps after the team gave up three in a 3-2 loss to the Ottawa Senators last night. Small wonder - that's eight straight games giving up at least one power play goal.

16 Caps have been on the ice for at least one power play goal against over the last eight games.

Four Caps have been on the ice for at least five of the 12 -- Karl Alzner (eight), David Steckel (seven), Brooks Laich (five), and Jeff Schultz (five). Steckel (healthy scratch against the Islanders) and Schultz (two games missed with an injured finger) have missed time in this stretch. Schultz, though, has been on the ice for all of his five power play goals against in the last four games -- on ice for five of the last six power play goals scored against the Caps.

All four of the players mentioned have been on the ice for at least one 5-on-3 power play goal scored against; Laich has been on for two of them.

In terms of goals allowed-per-minutes played on the penalty kill, Steckel has had the worst number, on ice for one power play goal for every 4:10. Schultz isn't far behind (4:18), nor is Alzner (4:35). Laich has been on for a power play goal against approximately every six minutes of penalty killing ice time.

Is it their fault? Penalty killing is as much a team effort as anything in hockey, but the fact remains that bad things have happened -- often -- when these four have been on the ice in that role. But we're not sure which is worse, the high numbers these four have or the fact that 16 different skaters have been on the ice for at least one power play goal against in the last eight games.

The coach is right...""If the [penalty kill] doesn't start getting better, [they're] not going nowhere."
Posted by The Peerless at 6:30 AM 5 comments: