The Peerless Prognosticator is ON THE AIR!!! -- Game 66: Wild at Capitals, March 5th

The Washington Capitals resume their alternating home-road contests by returning home on Thursday night to host the Minnesota Wild in what will be the Wild’s only visit to Washington this season.  We would rather they not bring the expected snow with them, but they are, after all, from Minnesota.

As for the Caps, this game continues a trend that began with a 3-2 Gimmick win over the New York Islanders back on February 21st.  Starting with that game the Caps have alternated contests at home and on the road:
The Caps get a chance to edge over .500 in this seventh game of alternating home-road contests when the Wild streak into Verzion Center.  And we do mean “streak.”  If there has been a streakier team in the NHL this season than the Wild, we are not aware of it.  Minnesota has had four winning streaks of three or more games (including the one they bring to Washington) with a high of six in a row from January 27th through February 9th.  They have had three losing streaks of four or more games with a season high of six (0-5-1) set from January 3rd through January 13th.

The current three-game winning streak on which the Wild find themselves has elevated them into the second wild card spot for the playoffs, three points ahead of the Los Angeles Kings and San Jose Sharks in the Western Conference.  Those three straight wins have something in common that extends much further back in their schedule – stinginess in allowing goals.  The Wild, and specifically goalie Devan Dubnyk, allowed only five goals over those three games, extending to 17 their streak (and again, specifically Dubnyk, who was the goalie of record in all of them) of games allowing three or fewer goals.

In fact, the Wild (yeah, and Dubnyk) allowed only 27 goals over those 17 games.  Dubnyk has found his inner Dryden, is channeling Roy, is Georges Vezina reincarnate.  Over the 17-game streak, Dubnyk is 14-2-1, 1.52, .944, with four shutouts.  This is a goalie who had a rather pedestrian 9-5-2 record in 19 appearances with the Arizona Coyotes (with a 2.72 goals against average and .916 save percentage, with one shutout) before he was traded to Minnesota on January 14th for a third round draft pick in this year’s entry draft.  When one considers that the other three goalies employed by the Wild this season (Darcy Kuemper, Niklas Backstrom, and John Curry) are a combined 18-19-6, 2.83, .895, with three shutouts, one could make a case that Dubnyk is the Wild’s most valuable player this season.

At the other end of the ice, the offense for the Wild is one that might best be characterized as one that “gets by” without a lot of flash.  Forty three times in 63 games they have been held to three or fewer goals (not including shootout goals scored), 30 times to two or fewer goals.  Given the talent on this team, the offensive output is somewhat disappointing. Take Thomas Vanek (bet you wondered where he was these days).  Last July he signed a three-year/$19.5 million deal with the Wild, hoping to expand on a resume that included an average of 34 goals per 82 games over his nine-year career coming into this season.  To date, he has 13 goals in 63 games.  Vanek got off to a horrid start – one goal in his first 21 games with his new club, but 12 in 42 games after that (a 23-goal pace) is not what Wild fans were expecting.

Here is how the two teams compare overall: 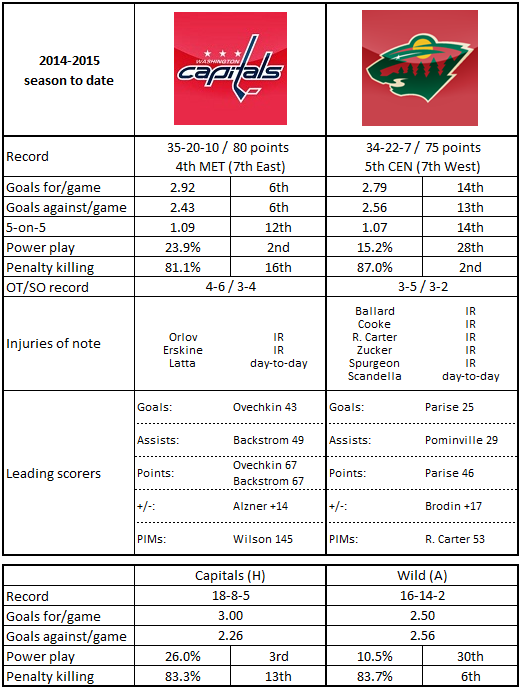 2.  The penalty kill is an entirely different matter.  The Wild have killed 46 of their last 47 shorthanded situations over their last 17 games (97.9 percent), 26-for-26 of that on the road in nine games.

3.  New Jersey is in a class by itself when allowing goals in the first period, only 29 in 64 games.  However, fourth-ranked Minnesota has allowed only three more first period goals (41) than second-best Ottawa (38).

4.  No team in the Western Conference – not Edmonton, not Arizona – has fewer wins against the Metropolitan Division than Minnesota (3-7-0).

5.  In this 14-2-1 run over their last 17 games, one would think the Wild dominated possession numbers.  They haven’t, at least not as much as one might think.  Their Corsi-for/Fenwick-for percentages at 5-on-5 are 50.3/51.8 – good, but no dominating.  And, they were a Corsi plus-22 in games against Edmonton and Colorado.  Take those out, and the Wild are minus-34 in their other 15 games.  In close score situations the numbers are 51.5/52.6 – again, good but hardly dominating (all numbers from war-on-ice.com).

2.  Alex Ovechkin leads the Caps in goals (five) and total scoring (5-1-6) over those six games; John Carlson is close behind in scoring at 1-4-5).  What is more surprising is that Jason Chimera is tied for the team lead in assists over those six games (four, with Carlson and Nicklas Backstrom).

3.  The Caps have allowed 15 goals in this six game run, five in each regulation period.

Folks have a certain familiarity with defenseman Ryan Suter – his contract (13 years/$98 million), his propensity to gobble up minutes (29:10/game, second among all NHL skaters), his hat trick against the Caps last season (one of only two career multi-goal games).  Folks might not be as well acquainted with defenseman Jonas Brodin.  He ranks second behind Suter in average ice time (24:32) for the Wild and leads the team in plus-minus (plus-17 in just 52 games).  He has been a “minus” player only once in his last 18 games (plus-10 overall)., and he has points in five of his last eight games (0-5-5).  His next shot on goal will be his 200th and will set a career high (75).  What he would probably like is to be more accurate.  He had eight goals on 74 shots last season (10.8 percent), but Brodin has just two goals on 74 shots this season (2.7 percent).  He is 0-1-1, minus-1, in two career games against the Caps.

Last season Marcus Johansson suffered a lack of goal scoring, finishing with just eight goals in 80 games.  It was not so much the shots as the efficiency part.  Having scored on 14.2 percent of the shots on goal he recorded over his first three seasons, he managed just eight goals on 107 shots (7.5 percent).  This season he is back to his more efficient ways, recording  a career high 16 goals on a career high 110 shots (14.5 percent).  He is on a pace to finish with the first 20-goal season of his career.  He comes into this game with goals in consecutive games, the first time he has done that since November 4/7 against Calgary and Chicago.  It is the third time he has done it this season.  Johansson is 2-2-4, plus-2, in three career games against Minnesota.

Minnesota poses an interesting challenge for the Capitals.  Frankly, it is a team against which the Caps might not match up very well.  The Wild have been next to impossible to score upon on the power play, and they have the very embodiment of the “hot goaltender” in Devan Dubnyk.  However, the Caps have won four straight against Minnesota on Verizon Center ice, and they have a solid 10-5-0 record in their last 15 games.  It won’t be easy, and it is likely to be frustrating at times, but Minnesota’s woes against the Metro continue.