The Peerless Prognosticator is ON THE AIR!!! -- Game 50: Capitals at Canadiens, January 27th

The Washington Capitals start the new week with Game 50 on their schedule, a visit to Montreal to face the Canadiens at Bell Centre on Monday night.  The Caps will be continue the momentum they built going into their eight-day break, winning their last three games.  On the other side, the Canadiens will be looking to maintain some momentum of their own, having won four of five games (4-1-0) before heading out of town for their own eight-day break. 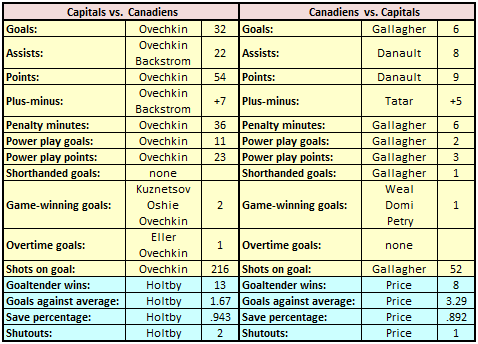 Arturi Lehkonen is tied for the team lead in goals since the first of the new year for the Canadiens (four).  The four goals he has posted in ten games in January brought his total for the season to 11 in 50 games, matching his total for last season in 82 games.  Lehtonen was Montreal’s second pick in the second round of the 2013 Entry Draft, taken with the 55th overall pick (their first selection, goaltender Zachary Fucale, taken with the 36th overall pick, has since moved on to the Tampa Bay Lightning organization after spending some time in the Vegas Golden Knights organization and has yet to appear in an NHL game).  After spending the next three seasons in Europe, he joined the Canadiens in 2016-2017, posting 18 goals (a career high to date) as a rookie, tied with Tampa Bay’s Braden Point for ninth-most among rookies in the 2016-2017 class.

Despite the four goals in ten games this month, Lehkonen has struggled to find the net on home ice.  The two goals he posted in a 3-2 overtime loss to Pittsburgh on January 4th are his only goals on home ice over his last 12 games at Bell Centre.  Overall, Lehkonen’s goal scoring has an odd quality to it.  Montreal is just 3-5-1 in the nine games in which he has goals and has lost both games in which he posted two goals, both at home (a loss to the New York Rangers in November in addition to the overtime loss to Pittsburgh).  His ice time also has a strange aspect to it.  Overall, when skating more than 16:30, the Canadiens are 5-9-2 in 14 games.  However, when he skated more than 17:40, they were 5-1-0, while they were 0-8-2 in games in which he skated between 16:30 and 17:40.  Lehkonen is 1-3-4, even, in ten career games against Washington.

Jeff Petry is the points leader among Montreal defensemen in the new year (1-3-4).  He is reached or is closing in on some personal landmarks in his Montreal career.  With three more goals he will become the 15th defenseman in Canadiens history to record 50 goals with the club (unless Shea Weber, who has 49 goals, gets there first).  He is one of 15 defensemen in Canadiens’ history to record at least ten game-winning goals (he has ten).  Before the season is over, he is likely to become the 28th defenseman in team history to appear in at least 400 games for the Canadiens (he has 364 games played so far in Montreal).

Petry is one of two defensemen to dress for Montreal this season to have passed his 30th birthday (at 32 years of age, he is two years younger than Weber).  He has never been an especially prolific defenseman in the offensive end, but he did record his first two career 40-point seasons in the NHL in the two seasons preceding this one, and he is on a pace to make it three in a row this season and match his career high in points set last year (46).  Petry is 3-5-8, minus-1, in 17 career games against the Capitals.

Carey Price deserves mention among the best goaltenders in the history of a franchise known for excellence at the position.  He is the all-time leader in games played for the franchise, which is noteworthy on a personal level since the four goalies to trail him (Jacques Plante, Patrick Roy, Ken Dryden, and Bill Durnan) all are members of the Hockey Hall of Fame.  His 341 career wins for the Canadiens is also most in team history.  The same four hall of fame netminders trail him.  Since Price came into the league in 2007-2008, he ranks third in games played (664, behind only Henrik Lundqvist (759) and Marc-Andre Fleury (696)), fourth in wins (341), seventh in save percentage (.918; minimum: 10,000 minutes played), 16th in goals against average (2.49), and seventh in shutouts (46).

This season, Price is doing his best to keep the Canadiens afloat, leading the league’s goalies in minutes played (2,363), but his numbers reflect the struggles the Canadiens are having.  Among 39 goalies with at least 1,200 minutes played this season, Price ranks 19th in goals against average and 21st in save percentage (.908).  His numbers have been weaker on home ice, a 2.97 goals against average and a .895 save percentage in 21 games played at Bell Centre this season.  What he does have going into this game is a personal four-game winning streak, his longest of the season, over which he stopped 142 of 148 shots and posted a shutout against Calgary on January 13th.  Price is 8-14-5, 3.29, .892, with one shutout in 27 appearances against Washington in his career. 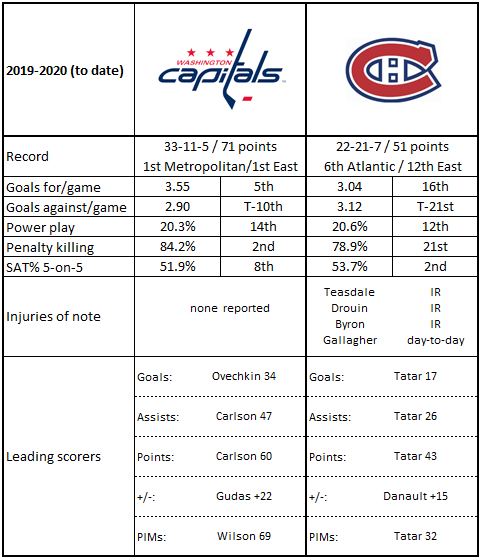 1.  Montreal is among the worst home teams in the league.  Their ten wins at home rank 29th, their 24 standings points earned are tied with Winnipeg for 27th, and their .462 points percentage at home ranks 29th.

3.  Montreal is also a bottom-ten dweller in special teams on home ice. They rank 27th on power plays (14.5 percent) and dead last in net power play (with shorthanded goals allowed factored in) at 7.9 percent.  Their penalty kill ranks 23rd at home (78.6 percent), but their net penalty kill (also at 78.6 percent) ranks 28th.

4.  The poor net penalty kill at home is a product of the fact that they are one of two teams (St. Louis is the other) who have yet to score a shorthanded goal on home ice.

5.  The Canadiens have played in a bit of bad luck at home, or they have been just good enough to lose.  They are tied with Columbus for most one-goal losses in regulation at home (five), and they have lost another four games in extra time.

5.  When the Caps outshoot an opponent on the road, they win.  Their 11-3-0 record when outshooting opponents while on the road leads the league in both wins and winning percentage.

Well, give the Canadiens credit for creativity.  In the midst of a dreadful 7-12-3 run that saw them sink from second in the Atlantic Division standings to sixth in the division and 13th in the 16-team Eastern Conference, Montreal went out and signed Ilya Kovalchuk to a one-year/$700,000 contract.  Kovalchuk started the season in his second year with the Los Angeles Kings, who signed Kovalchuk to a contract after he spent five years with SKA St. Petersburg in the KHL.  But he lasted just 17 games into the new season, going 3-6-9, minus-10, in 17 games before being effectively relieved of any further on-ice responsibilities in mid-November.  He deal with the Kings was terminated on December 17th, and his career was in limbo before the Canadiens came calling.

One would not call Kovalchuk’s arrival in Montreal the remedy to save the Canadiens’ season, but that is not Kovalchuk’s fault as much as it reflects the broader personnel issues the team has.  Kovalchuk has actually been something of a pleasant surprise.  Since joining the club he is averaging a point per game in eight games, and his four goals is tied for the team lead in January.  Those four goals already surpassed his total in 17 games with the Kings earlier this season (three).  Two of his four goals with Montreal are game-winners, and he scored his first goal at Bell Centre as a Canadien in Montreal’s 5-4 Gimmick win over Vegas just before the break (he added a goal to open the freestyle competition in that contest).  Kovalchuk is 29-30-59, plus-8, in 55 career games against Washington.

No one wants to say it, at least too loudly, but Washington has a goaltending issue.  Yes, Ilya Samsonov has been electric in goal for the Caps so far, but the key phrase there is “so far.”  As a rookie who has not played in more than 37 games in a regular season since he began his career splitting time between Stalnye Lisy and Metallurg Magnitogorsk in Russia in 2014-2015, is there a wall he is approaching that he will struggle with and have to battle through as part of his development?

That question adds only more weight to the burden the Caps have trying to get Braden Holtby untracked.  Holtby, who trails only Olaf Kolzig for the top spot in just about every statistical category for goaltenders in franchise history, is in the midst of what is arguably his worst season in ten as a Capital.  His goals against average of 3.09 is the worst of his career, as is his save percentage of .897.  And, it has not been a sudden onset of iffy play.  Since he finished second in voting for the Vezina Trophy in 2016-2017 on a record of 42-13-6, 2.07, .925, and a league-leading nine shutouts, Holtby is 84-44-13, 2.94, .907, with three shutouts in 146 games over three seasons.

Holtby seemed to be climbing out of his doldrums earlier this season when he posted a record of 14-1-2, 2.42, .924 over a 17-appearance run from October 18th through December 6th.  Since then, however, he is 3-7-0, 3.75, .866, and he has been pulled twice in 11 appearances.  If there is a team and a place Holtby can find his game once more, it would be against the Canadiens at Bell Centre.  Since March 15, 2011, when he won in his first appearance in Montreal, a 24-save effort in a 4-2 Capitals win, no goalie has won more often there than Holtby (9-1-1), he ranks fifth among 34 goalies logging at least 200 minutes at Bell Centre in goals against average (1.66), he has the sixth-best save percentage in that group (.941), and he is one of five goalies with two shutouts in Montreal in that span.  If Holtby is going to find a spark in his game, Montreal would be the place to do it.  If he gets the call, and his troubles continue, the Capitals will have an issue with which they would prefer not to deal.

The Capitals have 33 games left in the regular season, starting with this game.  And if there is one thing that has characterized this club in recent years, it has been their finishing kick.  Since 2007-2008, when the Caps put on a frantic rush to qualify for the postseason, the team has finished with 20 or more wins in their last 33 games ten times in 12 tries, including in the abbreviated 2012-2013 season.  Twenty wins in their last 33 games this season would place this club fourth in wins for a season in team history (53).  Matching their high in victories over the period (23) would tie them with the 2015-2016 team for wins in a season (56).  And in case you are wondering, yes, the 2017-2018 Stanley Cup winning squad did record 20 wins in their last 33 games (20-11-2).

Getting to those marks requires taking advantage of teams that are struggling.  Montreal qualifies as such a club, especially and strangely enough, on home ice.  Everyone is coming off a break, so there should be no falling back on that excuse for an indifferent effort or an unpleasant result.  They might be rusty, but the Caps have too much depth and skill for their hosts to let this one get away.