The Peerless Prognosticator is ON THE AIR!!! -- Game 18: Golden Knights at Capitals, November 9th

The Washington Capitals renew their brief, but intense rivalry with the Vegas Golden Knights on Saturday at Capital One Arena.  The Caps come into the contest among the hottest teams in the league (9-0-1 in their last ten games), while the Golden Knights have struggled of late (3-2-3).

This will be only the fifth regular season meeting between the clubs, equaling the number of games the teams played against one another in the 2018 Stanley Cup final won by the Capitals, four games to one.  The Caps are 1-3-0 against the Golden Knights in the regular season series, outscored by a 14-11 margin.  The Caps are 1-1-0 against Vegas at Capital One Arena, the lone win a 5-2 decision on October 10, 2018. 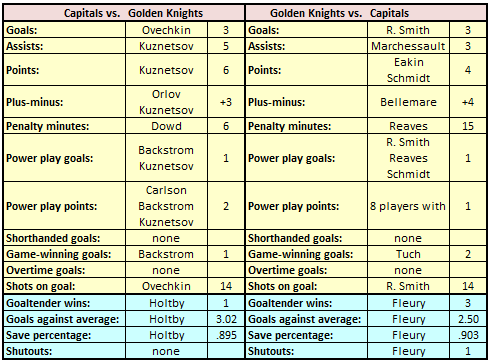 Vegas is the “Washington, D.C.” of NHL teams.  Everyone comes from somewhere else.  This is the lot of the third-year expansion team.  The Golden Knights are, however, starting to work home-grown players into their lineup.  Four players from their 2017 draft – their first draft -- have appeared in the NHL, two of them for the Knights in this, their respective rookie seasons.  Center Cody Glass was taken sixth overall in the 2017 Entry Draft, and after spending two more seasons in Canadian junior, plus a handful of games with the Chicago Wolves affiliate in the AHL, he was in the lineup on Opening Night this season against the San Jose Sharks.  From that game he took the memory of his first NHL goal, and he is a respectable 3-4-7, even, through 17 games so far this season.  Defenseman Nicolas Hague is the other Vegas-drafted rookie to dress this season.  Taken in the second round (34th overall) of that 2017 draft, he has not been in the lineup as frequently as Glass, appearing in ten games to date, and he has been up and down between Vegas and Chicago in the early going.  On Wednesday he was sent down to the Wolves after going 0-2-2, even, in ten games and averaging 14 minutes and change in ice time per game.  Neither has appeared against the Caps.

Mark Stone is one of those “from somewhere else” players.  Drafted in the sixth round of the 2010 Entry Drsaft (178th overall) by the Ottawa Senators, Stone is one of only 23 players among the 210 taken in that draft to appear in at least 400 NHL games (401).  Most of those – 366 of them – were played for the Senators before he was traded last February to Vegas with Tobias Lindberg to the Dallas Stars for Oscar Lindberg, Erik Brannstrom and a 2nd round pick in the 2020 Entry Draft.  He put up good numbers in his year-end tour with the Golden Knights (5-6-11, plus-4), but he has been more productive in the offensive end to start this season, going 8-10-18, those 18 points leading the team.

Stone been consistent (points in 13 of 17 games), but has scored in bunches as well with five two-point games.  Only one of the multi-point games have come on the road, and that was in the Golden Knights’ first road game of the season.  After going 2-4-6 with points in five of his first six games on the road, Stone is without a point in his last two road contests, although the Knights are 1-0-1 in those games.  Odd Stone fact… Vegas is 7-2-0 in the nine games he skated less than 20 minutes, 2-3-3 in the eight games he skated more than 20 minutes.  He is 4-4-8, plus-5, in 14 career games against the Caps.

Seven of the eight defensemen to dress for Vegas so far have posted points.  Shea Theodore leads that group (1-5-6 in 17 games).  Theodore was one of those players involved in the run-up to the 2017 expansion draft who was moved for other considerations related to the draft.  It was an “agreement” trade, Theodore going to the Golden Knights in exchange for an agreement by Vegas to select defenseman Clayton Stoner in the expansion draft.  Stoner, who was a 31-year old defenseman coming off a season in which he played in only 14 games for the Ducks, limited by an abdominal injury.  Stoner did not play again and has since joined the Vegas organization in a coaching capacity. https://www.cbssports.com/fantasy/hockey/news/clayton-stoner-moving-onto-bench/

Meanwhile,  Theodore is the all-time franchise leader among defensemen in goals scored (19) and points (72).  He had a fine start to this season, going 1-4-5, even, in his first six games.  Since then, however, Theodore has only an assist in 11 games and is minus-4 over that span.  It might not be coincidence that the Golden Knights were 4-2-0 in those first six games but only 5-3-3 in the 11 games since.  Odd Theodore fact… Vegas has not lost a game in regulation in which Theodore skated less than 20 minutes (4-0-2).  In six career games against the Caps, Theodore is 0-1-1, even. 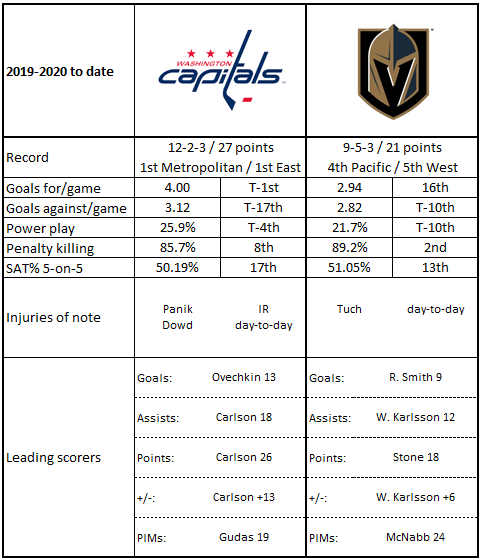 2.  Vegas has spent a lot of time killing penalties on the road, more than 60 minutes in eight games so far.  The 7:31 in shorthanded ice time per game is within rounding error of the New York Rangers for most in the league in road games through Thursday.

3.  No team has scored more shorthanded goals on the road than the Golden Knights (four).

5.  After a rough stretch of four road games in which the Golden Knights were in minus territory in shot attempts at fives in each game (minus-44 overall), they were in plus territory in two of their last three road games and were plus-18 overall.

1.  The Caps return to Capital One Arena having played in only seven home games.  Only four teams have played on home ice fewer times: Vancouver (six), Florida (six), Minnesota (five), and Tampa Bay (four) through Thursday.

5.  The Caps have 27 goals scored in seven home games.  More than a third of them have come from Jakub Vrana (six) and T.J. Oshie (five).

Cody Eakin might be one of those “keep putting one foot ahead of the other” sorts of players.  He was drafted by the Capitals in the third round (85th overall) in the 2009 Entry Draft and after a typical development arc out of Canadian junior and the AHL, he appeared in 30 games for the Caps as a rookie in 2011-2012.  Those would be his only games for the Caps, who out of a sense of “win now” traded him to Dallas with a 2012 second round draft pick for Mike Ribeiro.  In five years in primarily a checking forward role with the Stars he posted 61 goals and 146 points in 349 games.  But he was left exposed by the Stars in the 2017 expansion draft, and Vegas took him with their sixth selection.  He was a respectable 11-16-27 in 80 games with the Knights in their inaugural season before posting career highs in goals (22) and points (41) last season with Vegas.

When we posted the preview for Brendan Leipsic before the season started,  we noted that “from a distance, the love of hockey and the love (or at least tolerance) of travel intersect in the career of Washington Capitals forward Brendan Leipsic.”  Four teams in three seasons and 126 games makes for a lot of miles.  But Leipsic still managed to offer hints of having some offensive pop despite his modest role as a bottom six checker.  In each of the two seasons preceding this one he posted more than 20 points despite not playing in more than 62 games in either of them and doing it while skating for three different teams, including the Vegas Golden Knights (2-11-13 in 44 games in 2017-2018; he was traded to Vancouver before Vegas started the playoffs and did not appear against the Caps in the 2018 final).

Through 17 games this season he is slightly off his points per game pace of the last two seasons, but he is still on pace to challenge, if not surpass the 23 points he posted last season with Vancouver and Los Angeles.  Leipsic got off to a bit of a slow start with his new club, posting a pair of assists over his first dozen games.  However, in the Caps’ current five-game winning streak he is 1-2-3 despite averaging barely eight minutes per game (8:14).  Odd Leipsic fact… of 354 forwards to dress for at least ten games so far, Leipsic is one of 12 to average less than ten minutes of ice time per game (9:18).  He is 0-2-2, minus-8, in eight career games against Vegas.

The Caps come into this game firing on all offensive cylinders, averaging 4.60 goals per game on their 9-0-1 run.  On the other side, the Golden Knights have been all over the place defensively of late.  Over their last eight games, Vegas allowed five of more goals three times (0-2-1 record) and two or fewer four times (3-0-1 record).  Which team shows up for Vegas could make a difference, although the Caps are dominating everyone over the last three weeks.