Semyon Varlamov has yet to lose a regular season game in regulation thus far in his young career (8-0-1). But he sure has had some adventures along the way. In five of his last seven regular season appearances (including a no-decision) he has allowed at least four goals.

How does he do that, you ask?

Well, it seems he might be one of those guys who resemble that occasional major league pitcher who wins a ton of games, but can't get anyone out doing it. For example, in 2006, Randy Johnson won 17 games for the New York Yankees, tying for fourth in all the major leagues in wins that season. But he had a ghastly ERA of 5.00 in doing it. He had a ton of run-support. Some guys get it.

Some goalies might get goal support, too. In his nine decisions as an NHL goaltender, Varlamov has been the beneficiary of 36 goals scored by the Caps (4.00/game). That doesn't include the four goals the Caps scored in a game this season in which Varlamov was pulled after giving up four goals of his own (a 6-5 overtime loss to the Flyers in which he did not figure in the decision).

Sometimes, it's better to be lucky than good.

Still, we'd rather he be good.
Posted by The Peerless at 1:15 PM No comments:

A quote from an article in yesterday's Washington Post feature on Nicklas Backstrom got us to thinking. Here is the quote...

"Through the first eight games of his third season, Backstrom has two goals and nine assists -- four on Ovechkin goals -- and is on pace to notch a career-high 112 points to become only the second Capitals center to reach the 100-point plateau. (Dennis Maruk notched 136 in 1981-82.)"

First it reminded us that the Caps haven't ever really had much in the way of high-end scoring out of the center position in their history. Second, it reminded us of that old saying about success in team sports that you have to be "strong down the middle."

In terms of scoring out of the center position in hockey, perhaps not as much as you'd think. Looking back at 41 seasons since the original expansion, in 16 of those seasons at least one of the centers on the Stanley Cup champion had at least 100 points. In six other seasons, the Cup winner had a 90-point or better center. Here is the breakdown... 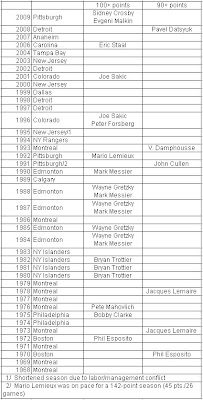 For some reason, we thought that the champions would be represented by more 100-point centers. Just something to think about on a cloudy Friday.

In only five games, no less.

Take THAT, Schultz haters.
Posted by The Peerless at 8:34 AM 1 comment: 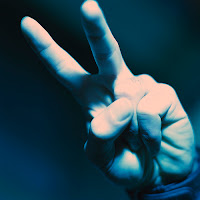 Back in those dark days of 2005-2006 and 2006-2007, there were nights when the Capitals lost, and fans, coaches, and players alike yet could say that it felt like a win. Such was the relationship between expectations (not much) and results (occasionally playing elite teams close).

Well, that was then. Now, the relationship of expectations to results has changed. Fans, players, and coaches expect big things from this team, and they expect that they will win on most nights and in dominating fashion against many of those opponents.

That is why last night’s 5-4 win over the Atlanta Thrashers has an odd taste to it. Not bitter, perhaps, for a win is still a win. But… off. Like milk that is about to spoil.

Things were still fresh when the Caps ran out to a 5-2 lead not 32 minutes into the 60 minute game after Chris Clark netted his first goal in a regular season game since New Year’s Day last season, the last of three goals scored in an 88-second span in the third period.

Then, the milk started to turn.

The Caps had one more shot in the last eight minutes of the second period, which served as something of a momentum-turning period in the game. While Atlanta was unable to carve into the Caps’ lead, they did stop the bleeding going into the second intermission.

The Caps still had an opportunity to regain that momentum when Marty Reasoner took an interference penalty early in the third period. But instead of driving the stake into the Thrashers – the Caps would finish the night 0-for-7 on the power play – Zach Bogosian would give the Thrashers some life by circling into the Capitals’ zone shorthanded and throwing the puck past Mike Knuble’s outstretched stick and Semyon Varlamov’s blocker on the far side (one Varlamov surely would want back) to get the Thrashers within two goals.

And it wasn’t as if the Caps didn’t have more chances to end the competitive portion of the evening after that. Maxim Afinogenov and Pavel Kubina took penalties 52 seconds apart later in the third period to give the Caps 1:08 of a two man advantage. The Caps managed four shots on the 5-on-3, but the power play ended when Mike Knuble took a slashing penalty in the offensive zone (ugh…). That was followed by a Jeff Schultz penalty almost two minutes after that. While Atlanta did not score on the brief 5-on-3, they did manage to close within one three seconds after the Knuble penalty expired to make it a one-goal game with 39 seconds left.

It then got equal parts ugly and interesting moments later when Alex Ovechkin was guilty of a borderline slew-footing of Rich Peverley. Atlanta managed three shots on goal in the last 30 seconds, but none of them got past Varlamov. The Caps escaped with a win… but it didn’t feel like one.

- Four players had their first goals of the season last night – Eric Fehr, Alexandre Giroux, Chris Clark, and Jeff Schultz. Add to that Matt Bradley scoring his third goal of the year, and it was an odd night for the top two lines.

- Schultz was 1-2-3, plus-3. It was his biggest point night of his career, although the one he’ll be talking about when he’s bouncing his grandson off his knee years from now is the one where blasted a 175-foot laser past Thrasher goalie Ondrej Pavelec. It was a laser, I tell ya (except for the half dozen bounces it took on the way in).

- 14 of 18 skaters finished on the plus side of the ledger, so we might be thankful for some sort of balance.

- Will Ovechkin be suspended? Almost certainly not. But he might find his wallet a bit lighter.

- Five hits? Five? None by Ovechkin? Pretty tame night, all things considered (like, this being a division “rival” and all)

- Two giveaways is the sort of number you’d like to see more of, but was that responsibility with the puck or official scoring quirks?

- Mike Green has eight giveaways this year – none last night. That might be tied for 17th among all NHL defensemen, but that’s not a bad number for a guy who has the puck on his stick as much as Green, especially since he’s tied for seventh in takeaways by defensemen (and no, he didn’t have any of those last night, either).

- Eight power plays allowed is way too much, especially against a team that can score like Atlanta. The Caps took four penalties in the last 10:23 of the game. If you want an example of losing focus and mailing it in for the last part of the game (the Caps were up 5-3 when the parade to the box started), well, there you go.

- Varlamov did not have a good game. On the first Thrasher goal – by Maxim Afinogenov (see…he was a torment for the Caps) – Varlamov did not look ready for the quick move off the faceoff. Bogosian’s goal should never have made it through on the long side. We think he has to get a pass for the Kovalchuk goal, when Kovalchuk stormed down the slot with no Cap in sight to slam home a rebound, and on the last goal, he had a great view of Nik Antropov’s backside as the puck was passing through.

Two points is two points, and the Caps have won three in a row. But the performances against Nashville and Atlanta in the last two were hardly sharp. The Islanders are next, and if the Caps want to tempt fate with another 40 minute performance, they do so at the peril of sustaining an embarrassing loss. Maybe it’s a bit of a let down after facing so many top teams right out of the gate. But whatever the reason, the Caps do not yet have the look of a team firing on all cylinders for 60 minutes.
Posted by The Peerless at 6:58 AM No comments: