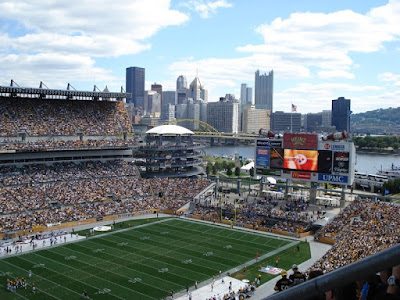 The Washington Capitals will visit the Pittsburgh Penguins on New Years Day in the 2011 Bridgestone NHL Winter Classic, which will be played at Heinz Field, home of the Pittsburgh Steelers.  Commissioner Gary Bettman confirmed the long-rumored matchup this afternoon.

In addition to confirming the teams and venue for this year's Winter Classic, the Commissioner provided what might have been unexpected news that Washington will host a Winter Classic in the next two to three years.  This should provide Caps fans with no end to speculation on where the game might be held -- FedEx Field, Nationals Stadium, the National Mall, the Dulles Greenway -- and which team might serve as the guest to the event.

So make your hotel reservations, Caps fans.  New Years Eve in Pittsburgh.  Bring your own noisemakers.
Posted by The Peerless at 3:04 PM No comments:

Theme: “We love to expect, and when expectation is either disappointed or gratified, we want to be again expecting.”
-- Samuel Johnson

Semyon Varlamov gives teasing glimpses of what he can be. In 51 NHL games (regular season and playoffs), he is 29-13-7, 2.51, .913, with four shutouts. Not bad for a goaltender who just turned 22. This year, Varlamov finished the regular season 15-4-6, 2.55, .909, and two shutouts, a performance that would appear to position him to permanently take over the number one goaltending job for the Capitals next season.

That’s the good news. But look at the ten-game splits a little more closely, and you can start to see the blemishes… 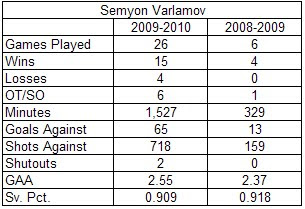 First, there is the matter of his missing the entirety of the fourth, fifth, and sixth segments of the season. Varlamov went down to an injury in early December, going on the shelf with a groin injury right after shutting out the Tampa Bay Lightning 3-0 on December 7th. He would end up missing two months of the season, returning on February 11th against Ottawa.

In the playoffs, Varlamov reprised his role of last season, coming to the rescue in relief of a shaky Jose Theodore. He did not have as scorchingly brilliant a performance against Montreal that he had against the Rangers in his first tour in the role, going 3-3, 2.41, .908. But comparing his playoff performance with, say, the goaltenders facing one another in the finals, one can see where he has to elevate his game. His save percentage in the six games at even strength of .924 is comparable to that of Chicago’s Antti Niemi (.927), although both trail Michael Leighton’s .951. But when shorthanded, while Leighton (.923) and Niemi (.913) have seen little drop-off in performance, Varlamov trailed badly at .828. Penalty killing was a problem for the Caps all season, but as the saying goes, your goaltender has to be your best penalty killer. Varlamov was not that for the Caps.

The injury to Varlamov denied the young goalie any sense of continuity to his season. He was injured in the midst of perhaps his best stretch of goaltending for the year, and he did not get enough steady work upon his return to get into any sort of rhythm. In the playoffs, his play certainly was not the primary cause of the Caps’ disappointing loss to the Canadiens, but he did not have an especially impressive series, especially against Montreal’s power play. He and the Caps are going to have to improve in this area to become a more difficult team to play against.

Next year, Varlamov is the prohibitive favorite to start the year as the number one goaltender, although given Michal Neuvirth’s performance last year and this, especially in the AHL playoffs, Varlamov will be pushed for that job. What is sometimes easy to forget is that goaltenders often take a while to mature. For example, of the 26 goaltenders selected in his 2006 draft class, Varlamov is second in regular season games played so far in the NHL (32). Only Steve Mason (112) has more. In fact, he has more games played than the other five goalies with NHL experience combined (note that Michal Neuvirth is third on this list with 22 games played). None of the goalies in the 2006 draft class has had Varlamov’s amount of playoff experience.

Varlamov can be spectacular when he’s on. He can look lost when he’s not. Taking over the number one goaltender job will give him the added responsibility of being more consistent, of being able to carry his team for stretches. He certainly seems to have the talent. Now he has to add the maturity and experience to reach that level of play. But for this year…

Grade: B
Posted by The Peerless at 6:11 AM No comments: