The Peerless Prognosticator is ON THE AIR!!! -- Caps vs. Canucks, October 13th

And we're live here at Peerless Central on this Columbus Day holiday in the U.S. of A., where we celebrate that man who didn't really "discover" America as much as he had a better literary agent. Tonight, the Caps host the Vancouver Canucks. It's been awhile since the Caps have defeated the Canucks in Washington. It's been since November 22, 2000, in fact (a 3-2 win in overtime). It is so long ago...

There was no Lu-on-go in Vancouver. He was enduring the first year of his incarceration in Florida with the Panthers, sentenced to toil in front of a team that can't score...sort of like now.

Todd Bertuzzi hadn't yet scored 30 goals for the Canucks (and hadn't yet jumped anyone on the ice yet, either).

Donald Brashear was on that team. So was Jarkko Ruutu...and Matt Cooke. We're betting they fought over rolls of tape on that team.

The Sedins were rookies.

It's been a while.

As for these Canucks, we'll borrow (steal, Peerless...it's called "steal") a page from the pop-up videos and bring you some things to know about the visitors... 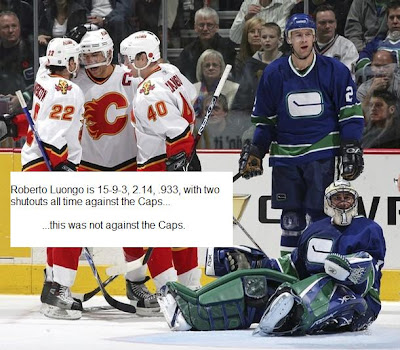 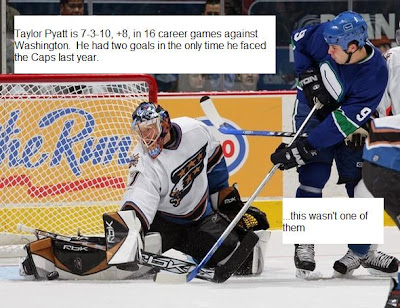 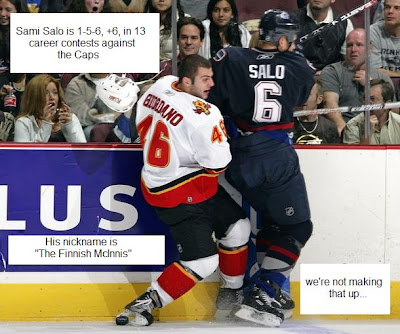 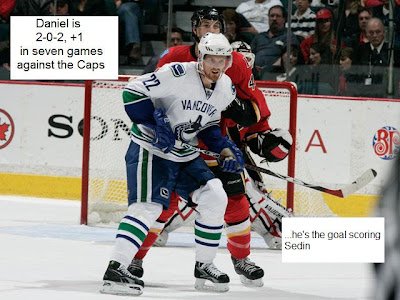 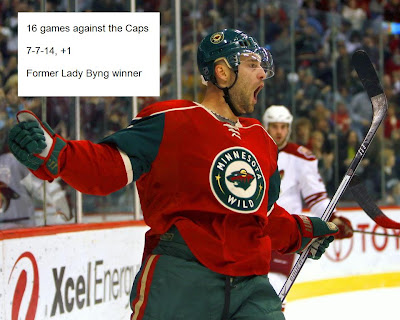 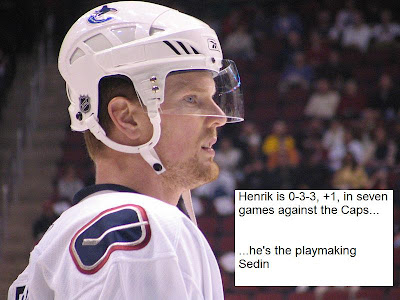 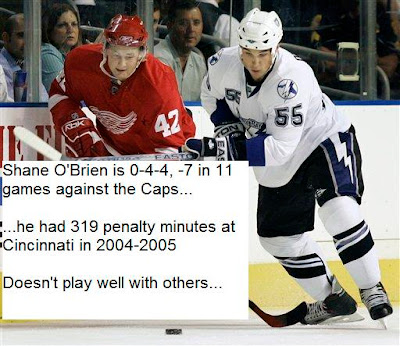 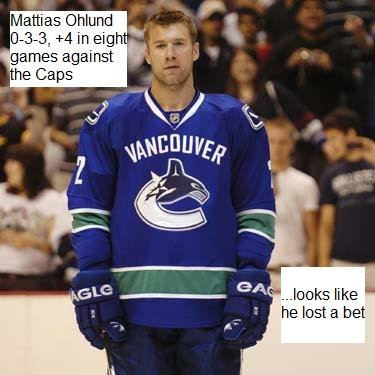 History repeats itself. Even Halley's Comet stops by every 76 years. And so it will be tonight, as the Men in Red defeat the visitors from the far northwest.

Email ThisBlogThis!Share to TwitterShare to FacebookShare to Pinterest
Labels: Gameday 2008-2009

It’s early in the year, not much has transpired, schedule-wise, so we were clicking through the clubs to see what they’re doing in terms of promotions to see what caught our eye…

Anaheim…only four “promotional nights?” Shirt, hat, magnet schedule, team photo. Ducks…starts with a “D,” and that’s what they get for imagination.

Carolina…flags on opening night, a magnet schedule, and bobbleheads (Eric Staal, Tim Gleason, Justin Williams, and Cam Ward). Carolina…starts with “C.” They get the gentleman’s grade for lack of imagination but volume of bobbleheads.

Columbus…the Blue Jackets are big on food. They have ten “all you can eat” package evenings and five dollar hot dog nights. As far as chotchkies, the Jackets have a John H. MConnell commemorative hat (McConnell was majority owner who passed away last April), magnet schedule, Rick Nash t-shirt, 2009 calendar, white-out t-shirt giveaway, and a team poster. The Blue Jackets get a "B" for giving fans a break on food and for some variety on the giveaways.

Edmonton…The Oilers will have a “Caps for Cancer Night” – pink and blue caps signed by an Oiler for a $20 contribution to fight cancer. They’re also having a “Shirts of Our Backs” Night…in December. And, it’s the ladies. The Edmonton Oilers Community Foundation and Edmonton Oilers Ladies will be conducting a raffle, winners getting a signed Oiler jersey. What, you were expecting…get your mind outta the gutter. A St. Patrick’s Day Puck Surprise has the ladies sponsoring a sale of autographed pucks for a $20 donation for selected charities. The Oilers get a “B” for their community support efforts.

Montreal…The Habs have a magnetic calendar and a car flag. They do have a series of “centennial jersey” nights, which aren’t technically giveaways, but which should be interesting, since they will feature players wearing vintage Canadiens sweaters. But, this being the centennial of the club, they could have done more in this area…”D.”

Ottawa…a red metallic pom-pom and “cool Sens luggage tag” on opening night. That’s it for the giveaways, but the Senators do have “sport chek kids games” (50% off tickets for kids) and vouchers for food at McDonalds. Still…looks like a “C” effort.

Philadelphia…the giveaways on their promotional schedule – three of them – are marked with an asterisk, but they don’t indicate what the giveaway is (maybe they don’t want to telegraph to fans anything they could throw), but they do have a “dollar dog night.” We’re trying to figure out the “Go Green Night” on October 22nd. Maybe they celebrate St. Patrick’s Day according to a different calendar. “D” for the Flyers. Oh, heck…give ‘em an “F,” it’s Philly.

Phoenix…Olli Jokinen bobblehead, short-sleeved t-shirt, winter gloves (in Arizona?), fleece blanket (in Arizona??), “build a bear,” and a Coyotes hat. They had three nights on which they gave away magnetic schedules – all preseason games (incentive to attend, I guess). They make a point to say that “season ticket holders are guaranteed all promotional giveaway items.” Well, hey…sign me up. “C”

Vancouver…the Canucks appear to shun giveaways in favor of contests…a “pick ‘n’ win” contest where you win tickets based on predictions, a “VIP chalk talk contest” where the winner gets a copy of the game plan from the coach (we’ll try to score and at the same time try to keep the other guys from scoring) before watching the game in a suite, and a “lucky traveler” contest that offers game tickets an trips (not to hockey games, apparently). Sorry, we want freebees…”D”

We just hope that beach towel on Fan Appreciation Day isn’t for crying into.

edit: After we posted this, we came across this one, courtesy of James Mirtle.
Posted by The Peerless at 2:31 AM No comments: