Washington Capitals: Will They Run Out of Time?

At the end of the day, the epitaph of this season for the Washington Capitals might read, “they ran out of time.”  A couple of weeks ago, we thought the Caps were pretty much done with respect to any hopes of securing a playoff berth.  Last week, we did not think their chances were altogether that good.

But today, the NHL trading deadline, the playoffs are not entirely out of the question.  Why?  Because the Washington Capitals have had two seasons in one, which is not all that surprising given that the Caps’ players did not have a training camp with which to familiarize themselves with a new coach with a new philosophy, one that resembles his predecessor’s philosophy only in that it is still ice hockey.

The Capitals got off to a miserable 2-8-1 start.  By February 7th they sat in last place in the Eastern Conference. They were already seven points out of the Southeast Division lead and five points out of eighth-place, the last qualifier for the post season.  Given the way the schedule was set up, with all games being of an “intra-conference” nature and so many opportunities for teams ahead of the Caps to earn points even while losing games, the climb back into contention looked daunting, even after just 11 games of a 48-game season.

But in the “second season” for the Caps, they are 15-9-1 since that awful start.  If you compare the standings of teams today with those of February 7th, the Caps have the fifth-highest points-per-game average since February 7th.  In fact, even “fifth place” might not be as bad as it sounds.  If you look at records of Eastern Conference clubs since February 7th, there is a certain amount of clumping going on: 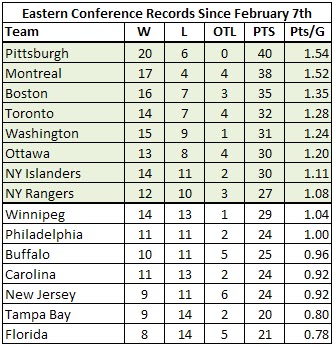 Put another way, since the Caps’ grisly start to the season, they are 102-point pace team over a full season.  This is, now, a playoff-caliber team.  That is not to say that they are a playoff team.  That poor start looms large, and the Caps are still two points out of the division lead and three points out of eighth place with 12 games left to play.

The Caps have several things going for them as they head down the home stretch.  First, they are playing comparatively well.  Not a Pittsburgh of Montreal level of well, but not insignificantly, either.  Second, the Caps will have eight of their last 12 games at home.  The Caps have had, to date, a poor home record (8-8-0), but that is an anomaly given the Caps dominance at home over the past several years.  One would think – or at least hope – that something to play for in front of their own fans will inspire the club to raise its game at home.  Then there is the matter of their learning curve in adopting head coach Adam Oates’ style of hockey.  The Caps still have only 36 games of real-time experience in applying Oates’ philosophy in NHL games.  There is still an arc to travel on that curve, which suggests that further improvement is possible.

The players have earned themselves a shot at pushing for the playoffs without blowing up this roster.  And while we do not have particular use for the phrase “anything can happen in the playoffs” (anything “can” happen, but anything rarely “does” happen, it seems, after the first round), the New Jersey Devils finished sixth in the East last season and went to a Stanley Cup final.  The Capitals might be that team that "no one wants to play against" in the post-season.  We cannot know at this point what effects and trading deadline deals might have on the Caps or their competitors, but the fact remains that the Caps have the fifth highest points-per-game average since their terrible start.  It is still an uphill climb, but it might be time to cue the music.

…unless they just run out of time.

Posted by The Peerless at 6:46 AM No comments: 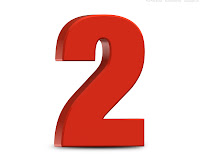 Well, 2010 anyway.  Last night in Raleigh, the Washington Capitals went back to the future, falling behind by two goals early, then roaring back behind a barrage from their big guns in defeating the Carolina Hurricanes, 5-3.  The win, coupled with a Winnipeg Jets loss to the New York Islanders, left the Caps just two points out of the Southeast Division lead with the Caps holding two games in hand on the Jets.

It did not start out well for the Caps as the Hurricanes posted two goals on the board midway through the first period.  The first came when Jiri Tlusty batted in a rebound of a Bobby Sanguinetti shot from the top of the crease with three Capitals surrounding him.  Tlusty gave Carolina a 2-0 lead less than three minutes after his first goal when on a power play Karl Alzner could not step out from a pick by Alexander Semin, freeing Tlusty to tee up a wrist shot that beat goalie Braden Holtby and putting the Caps in a two-goal deficit 14:07 into the game.

That would be the high point for the hosts.  As they have so often in what is now a 1-8-1 run over their last ten games, Carolina wilted under an avalanche of goals as the game wore on.  Alex Ovechkin got it started for the Caps before the first period ended, finishing a breakout just as one draws it up.  Braden Holtby got it started by holding the puck behind his own net, then sending it off to Jack Hillen along the wall in the corner.  Hillen sent the puck up to John Carlson exiting the defensive zone, who relayed it to Nicklas Backstrom heading through the neutral zone.  Backstrom gained the blue line, then left the puck for Ovechkin.  Using defenseman Brett Bellemore as a screen, Ovechkin wristed the puck to the long side, off the far post, and in to halve the Carolina lead going into the first intermission.

Mike Green tied the game just 42 seconds into the second period.  After what seemed like five minutes that Nicklas Backstrom held the puck on a power play looking for an option, he floated a pass to Green at the high point.  Green had time to tee up a slap shot and the puck sailed through a clot of bodies in front, once more hitting the post to goalie Dan Ellis’ right and settling into the back of the net.

Jiri Tlusty completed his hat trick 70 seconds after Green’s goal with a door-step deflection of an Eric Staal pass on a Carolina power play, but then the Caps took over for good.  Mike Green got his second of the game and seventh of the season less than three minutes after Tlusty’s goal.  It was another product of Nicklas’ Backstrom’s work.  When the puck squirted free from a battle between Jason Chimera and Eric Staal along the boards in the neutral zone, Backstrom picked it up and curled to the middle where he drove to the net.  As he approached the hash marks Backstrom left the puck for Green, who followed in Backstrom’s wake and wristed a shot over Ellis’ blocker to tie the game once more at three apiece.  That goal ended Ellis’ night in favor of Justin Peters.

The Caps took the lead on some good luck followed by taking advantage of the opportunity the luck provided.  Joni Pitkanen tried a long lead pass out of the Carolina end, but the pass was interrupted by the skate of Alex Ovechkin.  Marcus Johansson tipped the loose puck to Nicklas Backstrom at center ice, and Backstrom took it the other way.  Backstrom skated in aggressively and found Ovechkin behind Patrick Dwyer, trying to get back to back check.  Ovechkin snapped the puck over Peters’ glove, and the rout was on.

Joel Ward finished things up for the Caps in style with 44.9 seconds left in the second period when he converted a two-on-one shorthanded break with Marcus Johansson to give the Caps their final 5-3 margin.

-- With this win the Caps reached the .500 mark (percentage of standings points earned) for the first time this season.

-- With two goals in this game, Alex Ovechkin is now tied for third in goals with 20, behind Steven Stamkos (25) and John Tavares (23).  By adding an assist, Ovechkin is tied for tenth in total scoring with 37 points.

-- What’s with Ovechkin and empty nets?  If he’s not ringing chances off iron, he’s shooting it into old friends.  Alexander Semin blocked an empty net attempt with 61 seconds left to deny his old buddy a hat trick.  Hey, what are friends for?  Ovechkin might want to remember that the next time the teams meet (a week from tomorrow in Washington) and he has Semin lined up for a hit.

-- Here is another way to think about Ovechkin and empty nets.  Had he converted all of his empty net chances this season (four), he would have a shooting percentage of 14.5 percent, just off his career best – 14.6 percent in his 65-goal 2007-2008 season.

-- Nicklas Backstrom tied a career high with his four-assist night.  It is the seventh time he turned the trick, the first time since getting four helpers in a 6-3 win over Tampa Bay on Veterans Day, 2010.

--  Mike Green’s two-goal night was his first since getting a pair in a 7-1 win over Detroit on October 22, 2011.  Caps fans will remember that game as the last win in a seven-game winning streak to open the 2011-2012 season.  It was also the last time we saw a “healthy” Mike Green for quite some time.  After that game he played in only three games over the next four months.

-- And as if for good measure, the departed “Young Gun” – Alexander Semin – had a pair of assists of his own, but he was a minus-2, and yes, he did take an offensive zone tripping penalty.  Like the old days.

-- One more on Ovechkin… he is shooting again.  Over his last 29 games he has averaged 4.8 shots per game (a 396-shot pace over 82 games).  Not coincidentally, he has 18 goals in that span of games, a 51-goal pace.  He has almost a third of the Capitals’ shots in this game (six of 19).  Ovechkin has never been a sniper in the mold of a Mike Bossy or even a Peter Bondra.  He’s been the gattling gun that shreds opponents with volume.  And he seems to be back.  Like the old days.

-- Braden Holtby allowed three goals, the fourth straight game in which he has allowed three or more.  It is the longest such streak of his brief career to date.

In the end, this did look a lot like a game out of the 2009-2010 playbook.  Fall behind early?  Yeah, sure.  So what?  Then they come roaring back with timely offense from the guys who need to be timely with their offense.  Then they get enough goaltending and defense late (Holtby stopped the last 22 shots he faced) to seal the deal.  The question is, will that be a winning formula going forward?  We would just as soon dispense with the falling behind early part.

It ended up being a successful (2-0-1) road trip for the Caps, and they get a bit of a break in the schedule.  They will have to contend with the surging Islanders, but then they get Florida and Tampa Bay before midnight on Sunday.  They have dealt with adversity to put themselves in a position to rip the division lead out of Winnipeg’s mitts.  Let’s see how they deal with their recent good fortune.