The Peerless Prognosticator is ON THE AIR!!! -- Game 80: Capitals at Lightning, April 2nd

It has been a disappointing season for the Lightning. After having gone to the Eastern Conference finals a year ago and taking the eventual champion Boston Bruins to a Game 7, with Steven Stamkos having hit the 90 point threshold for the second straight season, with general manager Steve Yzerman and head coach Guy Boucher being the new thing in suits in the NHL, bigger things were hoped for on Florida’s left coast.

Then, the 2011-2012 season started, and the Lightning dug themselves a hole right out of the blocks. Tampa Bay lost five of their first six games (1-3-2). They would crawl out of it, going 7-2-0 over their next nine, but the 8-5-2 record they had over their first 15 games would be as far as they would go over .500. They would muddle along over the next seven weeks, finishing the 2011 portion of the season at .500 (17-17-3), but then a seven-game losing streak (0-6-1) to open the 2012 portion of the season rendered dim any hope of the playoffs. On January 15th the Lightning were 17-23-4 and 14th in the Eastern Conference standings. Not even an ensuing five-game winning streak could get them close enough to have any reasonable hope of reaching the top-eight. Since then the Lightning have alternated streaks. They have had three streaks of three wins or more while their losses have come in groups of two or more, six in all (four two-game skids and two three-game losing streaks). 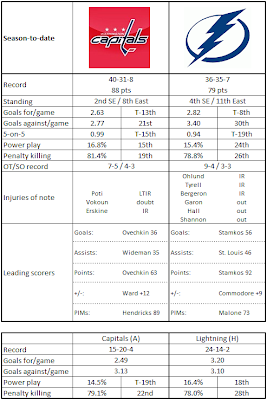 1. The Lightning have allowed five or more goals 20 times this season in 78 games. Sixteen different teams have reached that total with Pittsburgh, Toronto, San Jose, and the New York Islanders (not the Rangers, the Islanders) doing it twice apiece. They have allowed five of more goals nine times at home, 11 times on the road. They have one win in those 20 games, a 6-5 overtime win against San Jose on February 16th.

2. For all the goals allowed, the Lightning do a good job in one-goal games. Their 24 wins is the second most one-goal wins in the league (Vancouver has 26), and their .706 winning percentage (24-3-7) is best in the league. But when they can’t score… 12-32 in games decided by two or more goals.

3. Tampa Bay is the old diesel engine that takes forever to warm up. They are a minus-22 (goals scored/goals allowed) in the first period of games this season. That has contributed to their having a lead only 22 times after 20 minutes. Only four teams have had fewer leads at the first intermission, and there are six teams that have as many or more wins with leads after the first period than Tampa Bay has had leads.

4. More goals have been scored in games involving Tampa Bay than in games played by any other team this season (6.22/game). But low scoring games? Tampa Bay is 7-25-4 in games in which they score two or fewer goals.

5. Odds and Ends… No team has enjoyed more power plays in overtime than Tampa Bay (five)… Only New Jersey has allowed more shorthanded goals (13) than the Lightning (12), while no team has fewer shorthanded goals of their own than the Lightning (two, both on the road)… Tampa Bay is tied for the league high for minor penalties taken in a game this season – 12 against the Rangers on December 8th in a 3-2 win (the Rangers had nine; there were no fighting majors, but there were 11 roughing minors doled out).

2. Troy Brouwer leads the Caps in the season series with the Lightning with five of the 16 goals scored by the Caps, including a hat trick on January 13th. Jason Chimera, Alex Ovechkin, and Marcus Johansson have two apiece.

4. Scoring first matters, when it is the other team. Only five teams have more losses in regulation than the Capitals (25) when allowing the first goal.

After a 14-goal season last year, Ryan Malone returned to the 20-goal club this season (his fourth). He did it by scoring six goals in his last four games, five in his last two. He has been very economical in doing things lately, too. Those six goals have come on a total of 11 shots. He is 7-12-19 in 32 career games against the Caps, including a 1-3-4 scoring line in four games this season.

Roman Hamrlik was the very first draft pick of the Tampa Bay Lightning. A lot of players from that class have come and gone – Cory Stillman, Mike Peca, Anson Carter, Matthew Barnaby, Darius Kasparitis among them. Hamrlik is the games-played leader of that class (1,376) and fifth in points, the second-leading point getter among defensemen (Sergei Gonchar has 746 points to Hamrlik’s 634). What he does not have is a point in his last 13 games for the Caps, but he is a plus-6 in those games. Despite being abused by Tomas Plekanec for a goal in the Caps’ 3-2 Gimmick win over Montreal on Saturday, he has been playing rather well of late. He might not get the assignment of helping stop Stamkos, but he could be important in helping the Caps keep Malone from doing any damage.

1. Score four or more. Tampa Bay is 3-29-3 when allowing four or more goals and have not won a game in regulation when doing so. Part of doing that is shots on goal, something you might expect for a team with shaky goaltending. The Lightning are 2-8-0 when allowing 35 of more shots on goal, and neither win came in regulation. And, the Caps are 21-2-0 when scoring at least four goals.

3. Hammer Stammer. Steven Stamkos has 37 goals in 49 games in which he recorded four or more shots on goal. In the other 39 games – 19 goals. A respectable total, to be sure (a pace that would still be a 40-goal season), but certainly less formidable. Sure enough, in three of the four games this season in which Stamkos had four or more shots against the Caps, he recorded a goal (and in both of Tampa Bay’s wins). Keeping from him from getting into comfortable places for shots will be Job 1.

In the end, it is a division matchup, and as much as any rivals in the Southeast Division, these teams have a history. Tampa Bay has eliminated the Caps from the playoffs twice, and they have a chance to take a big wet bite out of the Caps’ chances to qualify for them this season. They are going to want to do right by their fans on the second of two “Fan Appreciation Nights” the Lightning are holding to close the home season. One hopes they appreciate the gifts and not the result.