The Peerless Prognosticator is ON THE AIR!!! -- Caps vs. Lightning, January 12th

It’s the middle game of a three-game road swing as the Caps head into Tampa to take on the Lightning in hopes of extending their franchise-longest winning streak against one team to 13 games. The last time the Caps lost to the Lightning was November 16, 2007, a 5-2 loss. In 12 games since then, the Caps have outscored the Lightning 50-24. And if there is anyone in these parts who knows losing streaks, it is the former coach of the NFL’s Tampa Bay Buccaneers (one-time owners of an 0-14 season), John McKay. Coach, welcome…

“The pleasure is all yours, Peerless.”

Uh, yeah. Coach, would you say that over this 12-game losing streak against the Caps that the Lightning have lacked emotion?

"Emotion is highly overrated... My wife Corky is emotional as hell but can't play football worth a damn."

Well, I’m sure she would appreciate the sentiment. The Lightning have struggled on the power play against the Caps. Any advice there?

“They were absolutely horrible and that’s the best thing I can say. Besides that they were bad. These people are not poorly paid you know.”

I suppose not. But coach, the Lightning have only played the Caps once this year, a 3-0 shutout loss. Did you happen to catch that one?

“There were times I felt like leaving the stadium and hitchhiking home.”

Coach, you’ve had a chance to see Alex Ovechkin. Some folks think he shoots too much. Do you agree?

“He doesn't belong to a union. Anyway, the puck doesn't weigh that much.”

Tampa Bay has had its troubles over the last month or so. What do you think of the Lightning’s execution?

What about the playoffs, coach? Do you think Tampa Bay has a prayer of getting in?

“You do a lot of praying, but most of the time the answer is `No.'”

Well, the Lightning might want to resort to beseeching the Almighty after dropping a dozen consecutive games to the Capitals by that combined 50-24 score. In those 12 games for the Caps…

You could call that “domination.”

Since the Caps and Lightning last met – a 3-0 win for the Caps in Tampa on December 7th, the Lightning have gone 6-7-2. The Eastern Conference being what it is, though, that has allowed the Lightning to hang around the edge of the playoff mix. The overall numbers for the Lightning look like this… 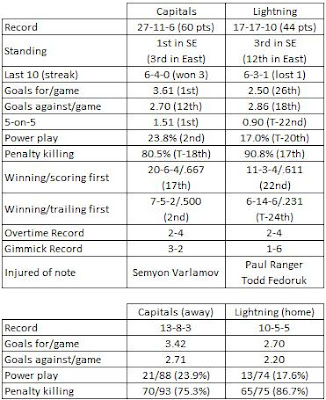 Perhaps one of the reasons Tampa Bay hasn’t broken through into the top-eight in the East is that they rely on so few players for offense. Four players – Steven Stamkos, Ryan Malone, Martin St. Louis, and Vincent Lecavalier have accounted for 57 percent of the 110 goals Tampa Bay has scored this year. They are the only players in double digits in goal scoring thus far.

Stamkos got off to a fast start in the goal scoring department this season – 17 goals in his first 24 games. But he has only six in his last 20 games and two in his last eight (both in the fragmented 4-2 win over New Jersey that began on Friday and ended on Sunday). He is 3-0-3 in seven career games against the Caps.

Malone is on a pace to eclipse his career highs in goals, assists, and points. He has arguably been the Lightning’s best all around player this season (he is also tops in plus-minus and hits, and he has a positive takeaway/giveaway ratio). But after registering game-winning goals in two of three games in late December, Malone is 0-2-2 in his last six games. In 21 career games he is 5-9-14 against the Caps.

Last year, Vincent Lecavalier had his worst season, statistically, since the lockout (29-38-67, minus-9 in 77 games). It could have been considered an aberration, a product of his coming back from off-season shoulder surgery and having to endure a wrist injury late in the year that would put him on the shelf for the last five games of the season. This year, though, he is on a pace for 75 points and 19 goals, the latter of which would be his lowest total since his rookie year. This isn’t part of the plan for a guy who is a 7.8 million a year salary cap hit (and will be through the 2019-2020 season). He is showing signs of busting loose, though. He is 5-13-18 in his last 18 games, but has points in 12 of those games. In 58 career regular season games against the Caps, Lecavalier is 26-29-55.

Foster leads all Lightning defensemen in scoring (6-11-17 in 34 games) and has the only game-winning goal among the blueliners. He is 3-8-11 in his last dozen games, which corresponds with an increase in ice time. He has recorded 20-plus minutes in five of those dozen games, compared to having not hit the 20-minute mark in any of his previous 22 games this season. It is somewhat new territory for Foster, who is on a pace to set career highs in goals-assists-points (an 11-21-32 pace).

1. There is no streak…there is no streak. One of the problems teams have in extending streaks is sometimes they focus more on the streak than the game. Tampa Bay has not been especially competitive in this series lately, evidenced not only by the streak but by the Caps getting off to such fast starts in games (those 20 first period goals in 12 games, four times netting three in the opening frame). The Caps are better, by a lot. If they play to that level of effort, forgetting that they have dominated this series over the dozen games, this is another one that could be over early.

2. Short legs. Tampa Bay had hockey on three consecutive nights, two of them in New Jersey (a place that can sap the life out of anyone, and that’s not even counting having to play the Devils). Even with a day off, will Tampa have the legs for 60 minutes? Another reason to look for the Caps to jump on the Lightning early.

3. I’m special…no, I’m special. The Caps are 8-for-28 on the power play in their last eight games (28.6 percent). The Lightning are 23-for-25 on the penalty kill in their last seven games (92.0 percent). This could be the fault line on which this game is decided. Despite that fine power play number, the Caps haven’t had a lot of opportunities (3.5/game in their last eight games). And the Lightning have killed off penalties as a product of not having to do it often (3.57 shorthanded situations per game in their last seven). The key for the Caps might be getting four or more chances with the man advantage.