While Hurricane Sandy was lashing the east coast with high winds, rain, and Twitter commentary, the Washington Capitals wrapped up their first long road trip of the season with a visit to the Twin Cities to face the Minnesota Wild on Monday night.  The Caps entered the game winless in three straight (0-2-1), while the Wild were meandering around with a 3-2-2 season mark.

The Caps came into this contest having difficulty scoring on their power play – 3-for-20 for the season and 0-for-14 dating back to the third period of Game 3.  Their difficulties continued when they could not convert a penalty taken by Minnesota defenseman Tom Gilbert early in the first period.  The problem the Caps have been having on their power play has not been taking shots as much as it has been getting those shots on net.  On this power play Alex Ovechkin managed to get three shots off, but all missed.

The Caps returned the favor of taking a penalty mid-way through the period when Jason Chimera was sent off for holding.  He was followed to the penalty box by John Carlson, who shot the puck off the rink for a delay-of-game penalty to give the Wild more than 90 seconds of 5-on-3 time.  The Wild would not need all of it to get the game’s first goal.  Dany Heatley ripped a shot over Caps’ goalie Michal Neuvirth’s blocker to give the Wild a 1-0 lead at 10:58 of the first period.

The Wild converted the back half of the power play on an unfortunate play for the Caps.  From the right wing faceoff circle Devin Setoguchi attempted to send a pass across to Heatley at the left wing hash marks.  But Jay Beagle got his stick on the pass on its way through.  The trouble for the Caps was that Neuvirth was sliding across to defend against Heatley.  Beagle got too much of the puck and redirected it into the net through the space that Neuvirth vacated.  That was how the clubs went to the first intermission, the Wild up by a 2-0 margin.

The second period was marred for the Caps by their wearing a path to the penalty box.  The Caps took three minor penalties over a 14:31 stretch of the second period – Troy Brouwer, Matt Hendrick, and Mike Ribeiro being the culprits – but the Wild could not convert due to Neuvirth’s superb performance in goal.  Neuvirth turned away all 11 power play shots he faced in the period, and it seemed to provide the Caps with a spark.  The Caps outshot the Wild 6-0 in the last 3:11 of the period, but Wild goalie Niklas Backstrom was up to the task, turning all of them away.  The period ended as it started, with the Wild holding onto their 2-0 lead.

The momentum the Caps established at the end of the second period carried over early into the third period as they pinned the Wild in their own end and kept the home team playing defense.  The pressure paid off when Ryan Suter was sent off at the 2:44 mark for holding, giving the Caps their second power play opportunity of the game.  The Caps futility on the man advantage continued in the technical sense, as they failed to convert in the 2:00 of power play time allotted to them.  But with the Caps still exerting pressure in the Minnesota end, they did convert just four seconds after Suter’s penalty expired.  Nicklas Backstrom notched his first goal of the year when he put back a shot by Alex Ovechkin, the rebound for which the Wild’s Backstrom had trouble controlling.

The Caps kept applying the pressure and had an excellent opportunity with the clock winding down to the five minute mark when Mike Ribeiro and Brooks Laich had a 2-on-1 break.  However, Backstrom turned aside Laich’s redirect of a Ribeiro pass with his right pad, and the chance was no more.  Despite outshooting the Wild, 17-8, in the final period, the Caps could get no closer.  Backstrom made the one-goal margin stand up, and the Caps had their fourth consecutive loss, their road trip finishing with an 0-3-1 mark. 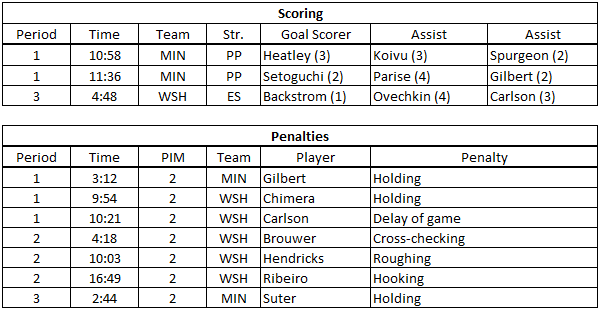 Posted by The Peerless at 1:53 AM No comments: